Jeff Bezos might as well join the crowd and call it Amazon+. No other company’s calculus is more deserving.

From Hollywood to health care, Amazon.com Inc. seems to be growing tentacles at an accelerating rate. The online retailer has snapped up MGM, a storied remnant of the golden age of film, for US$8.45 billion, its second-largest takeover after Whole Foods Market. Most companies in the midst of such an important strategic expansion would stop it there, but not Amazon. It’s said to be crafting its next plan to open brick-and-mortar pharmacies in the U.S. to move deeper into drug distribution. That’s only this week’s headlines — the reaches of the US$1.6 trillion conglomerate stretch far further. And now, as Amazon’s founder prepares to step back, it’s this multifaceted, if chaotic, culture that’s leaving investors to wonder what becomes of the technology giant as that label becomes more of a stretch.

Amazon’s recent moves mean Walt Disney Co. and CVS Health Corp. have a common enemy, which would almost sound absurd if it didn’t have some precedent. Just ask General Electric Co. how that worked out. The difference between Amazon and the failed conglomerates that came before it, though, is that across its divergent interests there seems to be a unifying mission: making it easier for consumers to get things. It does this by shortening the trip from point A to point B or consolidating services into a single subscription known as Prime. That’s a more virtuous business model than purely ego-driven empire-building.

Amazon’s method ensures its utility in our lives, a relationship that, once established, is tough for competitors to break. The downside is that this had led to complaints of anticompetitive practices, including the company undercutting third-party merchants on its own shopping app and preventing them from offering better prices on other platforms. That last part happens to be the focus of an antitrust lawsuit filed this week by the attorney general for Washington, D.C. And other states are weighing their own actions. 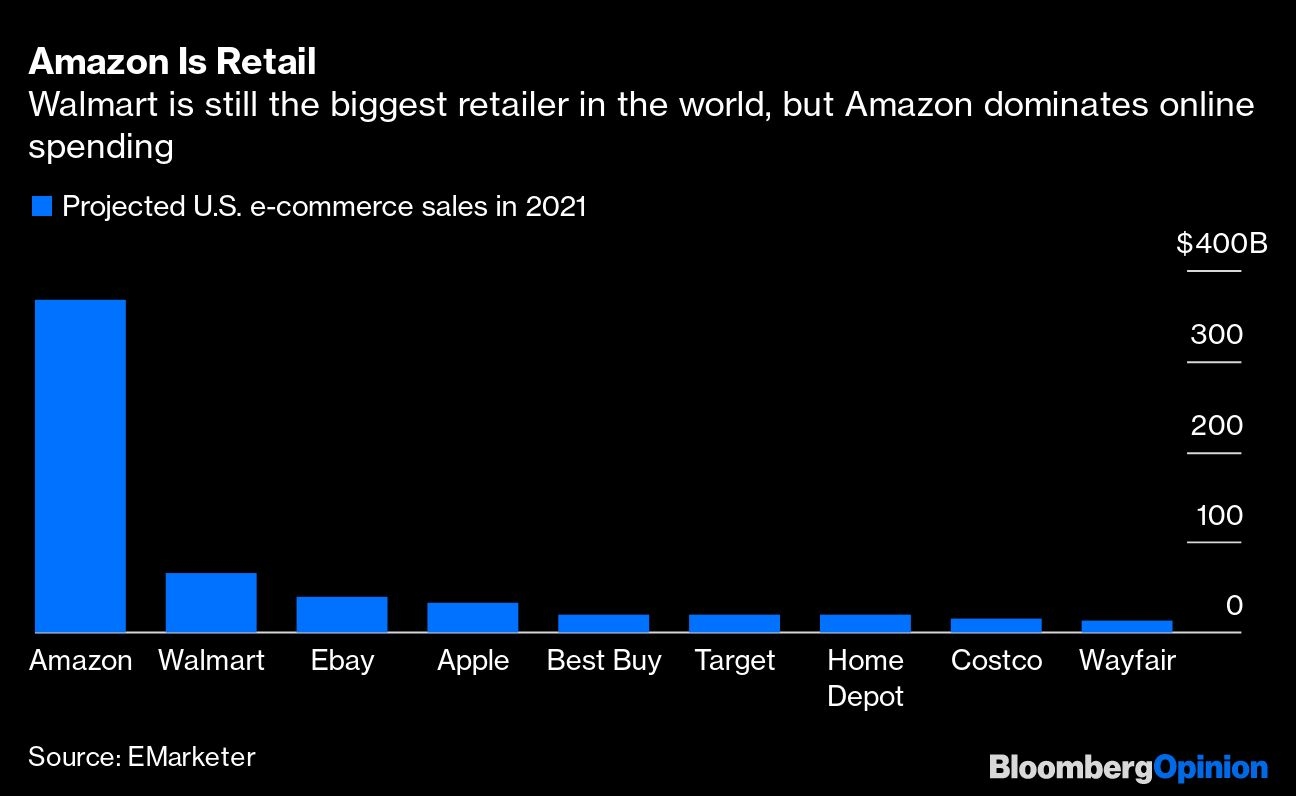 The question that’s repeatedly come up in the past year is whether something needs to be done about Amazon’s unchecked power, and if so, what? And yet a far tougher question is much more basic: What is Amazon?

The company’s quarterly filings break down revenue into the following main buckets: e-commerce, physical stores, the Amazon Web Services cloud-computing division and subscriptions. Bezos, speaking to investors this week, further defined Amazon as having three corporate “pillars”: AWS, Marketplace and Prime. For a business to reach that pillar status, he said, it must be a product or service that customers love and that can grow significantly while producing strong returns and remaining durable over time. He suggested that Alexa, the voice-controlled assistant device, and Amazon Studios, its TV and film production arm, are future contenders. But even pillars are structures too small to accurately portray Amazon’s scope and influence.

This is a company with a 40 per cent share of total e-commerce sales in the U.S., where the next biggest is Walmart Inc. at just 7 per cent, according to EMarketer. It captures 83 per cent of all online book, video and music sales, as well as about half of computer, consumer-electronic, toy and hobby purchases made online. In fact, it has more than a 25 per cent share in every category except automotive parts. Amazon is also a breeding ground of valuable personal data. As the company’s e-commerce sales and fees increased by US$83 billion last year amid pandemic lockdowns, its share of U.S. digital advertising revenue also jumped to 10.3 per cent from single digits in 2019. 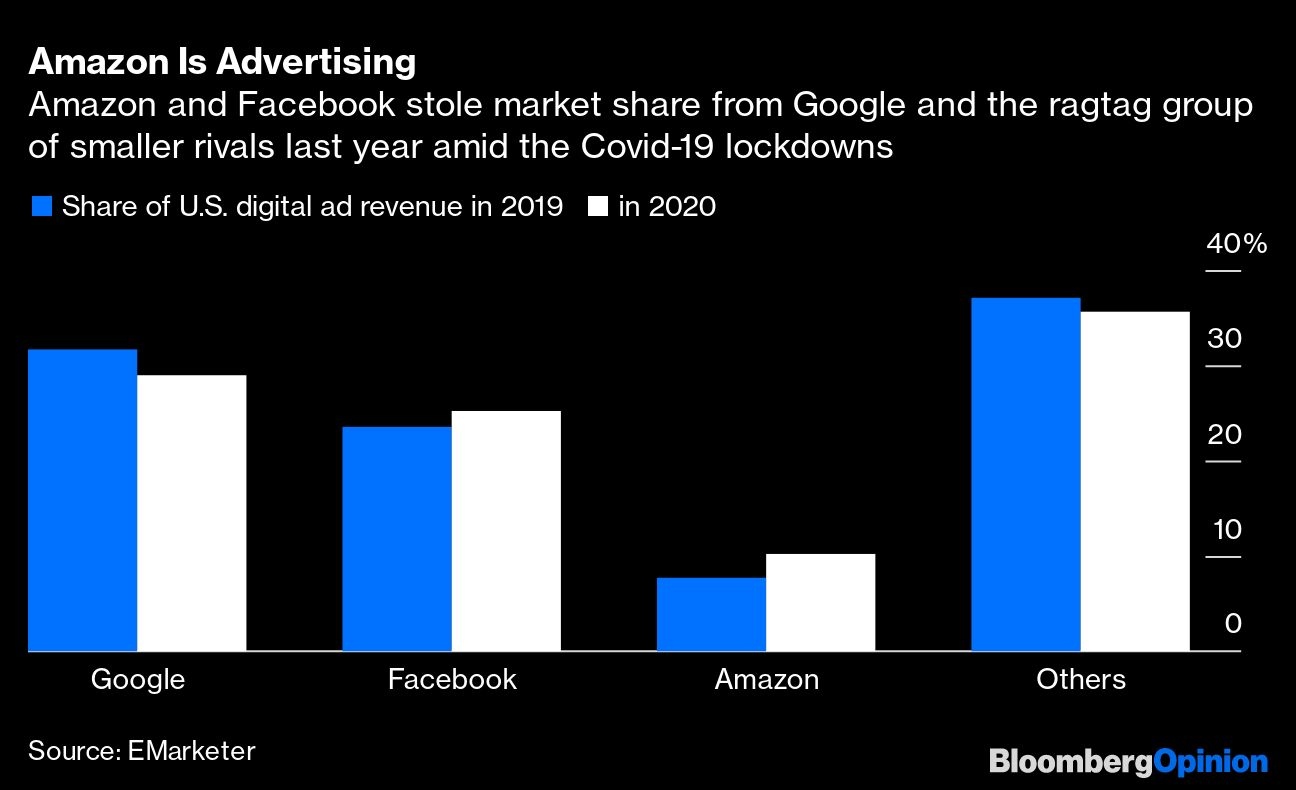 And all of that is just its virtual footprint. In North America alone, Amazon owns or leases about 345 million square feet of fulfillment and data centers, retail space and offices — meaning this “tech” company has a bigger physical presence than Target Corp. Its fulfillment and data facilities could fit more than 2,000 Costco Wholesale Corp. warehouses inside it. And Amazon employs nearly 1.3 million people, including more than 100,000 drivers — and counting — for its last-mile delivery services that are posing a direct threat to FedEx Corp. and United Parcel Service Inc.

Amazon and its logistical might have also been skirting around the edges of health care for a long time. The Haven joint venture with Berkshire Hathaway Inc. and JPMorgan Chase & Co. — established to tackle skyrocketing health-care costs — was unceremoniously dismantled this year. However, its 2018 acquisition of online pharmacy startup Pillpack ushered in the more recent launch of Amazon Pharmacy, offering home delivery of prescription drugs and discounts for people who pay without insurance. Now it may look to build physical drug stores. 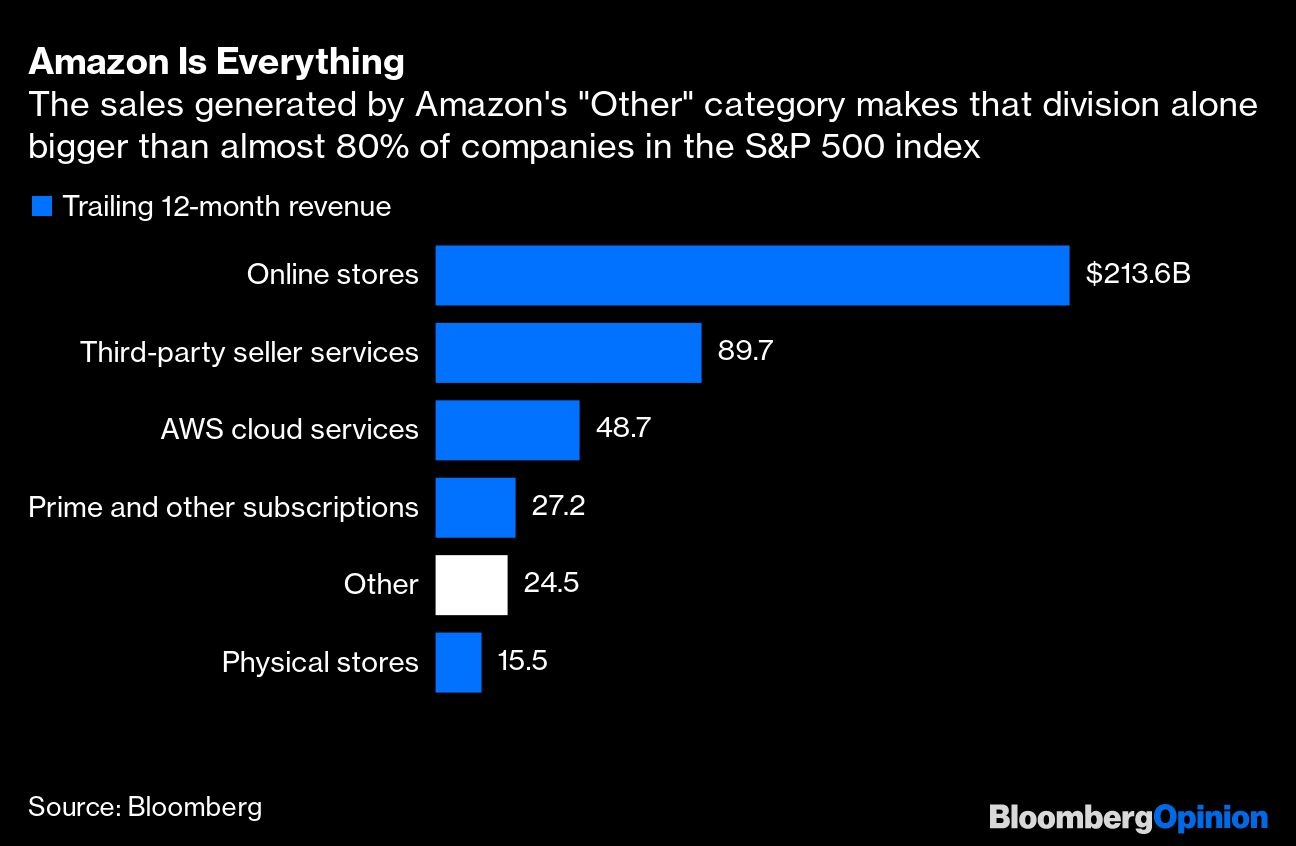 On those fronts, Amazon is competing with both incumbents and richly funded startups, not unlike its efforts in streaming TV. And at the moment, it doesn't seem to be offering much that's unique or disruptive in either industry. The MGM purchase appears aimed at converting more Prime members into Prime Video users given that many still rely on Netflix Inc. as their service of choice. But the terse press-release treatment the deal received adds to doubts that it will be a game changer — not because it’s not capable, but because it’s not clear Amazon is that committed.

MGM is only the company’s latest bet on entertainment, having bought Twitch for less than US$1 billion in 2014 to enter the video-game livestreaming business. To this day, though, Amazon’s biggest purchase remains the biggest headscratcher: It acquired Whole Foods for US$13.7 billion in 2017, an acquisition that seems to have been forgotten both inside and outside the company. In the case of MGM, it at least has a clearer tie-in to the Prime strategy.

Still, Bezos has given no indication that the company is ready to put the same effort into streaming and health care as it has into Amazon.com. He’ll step aside in July, and Andy Jassy, who runs AWS, will take the helm. When the succession plan was announced in February, Chief Financial Officer Brian Olsavsky called Jassy “a visionary leader” who “understands what makes Amazon such a special innovative company.” Great, maybe he can clue in the rest of us.