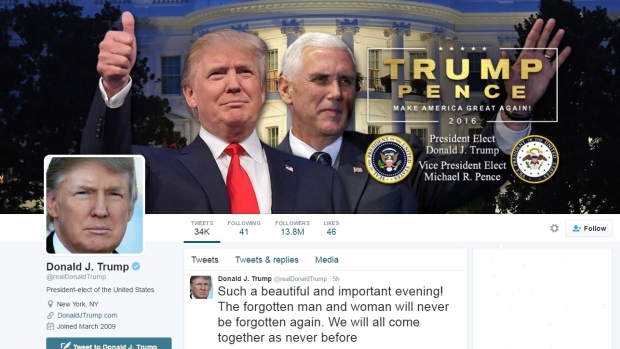 Trump was quick to share his 140 characters with the world and immediately changed his profile description to read "President-elect of the United States."

Such a beautiful and important evening! The forgotten man and woman will never be forgotten again. We will all come together as never before

Hillary Clinton’s account tweeted highlights from her Wednesday concession speech offering both her acceptance of the voters’ will and her thanks for voter support during the campaign.

“Donald Trump is going to be our president. We owe him an open mind and the chance to lead.” —Hillary

"To all the women...who put their faith in this campaign and in me...nothing has made me prouder than to be your champion." —Hillary

Prime Minister Justin Trudeau tweeted an official statement declaring that Canada "[looks] forward to working very closely with President-elect Trump, his administration, and with the United States Congress in the years ahead."

Reaction from Canadian leaders was focused on how Trump's election win would affect relations between the two trade partners, with former prime minister Stephen Harper honing in on TransCanada’s Keystone XL pipeline project. Trump has previously expressed support for the controversial pipeline, but said he wants the U.S. to receive a “big, big chunk of the profits.”

Saskatchewan Premier Brad Wall, meanwhile, said “I hope he reconsiders his plan to end NAFTA,” in a statement. “I would urge Prime Minister Trudeau and our federal government to reach out to the new administration as soon as possible on these and other issues of importance to our two countries.”

B.C. Premier Christy Clark released a statement of her own, congratulating Trump and seeking to "grow the relationship that is crucial to working families in our province on issues like free trade and a new softwood lumber agreement."

“He was onto something about how the world is working and not working for people. And there are also issues around race and misogyny that I think are just out there … he’s one of the few politicians in recent memory that has not been afraid to play with those issues, in what I think is a very dangerous way.”

Rae added that Trump needs to be willing to work with those around him to succeed in the White House.

“The worst thing that could happen would be for Trump to feel: ‘I won. I won it my way. I did it. Get out of my way.’ … If he does that he’s going to hit a brick wall really quickly, just in terms of the realities of governing.”

A pair of Harper’s former cabinet members were not afraid to get opinionated in the aftermath. Here’s what former Defence Minister Jason Kenney and former Minister of Industry Tony Clement said:

I've been profoundly opposed to Donald Trump's candidacy. But Americans have decided.CDA's leaders must work w/ him to advance our interests

The ignoring of suffering people by American political, and business, elites has been repudiated and crushed. #USElections2016

"I congratulate the USA on its electoral process and reiterate to @realDonaldTrump the willingness to work together in favor of the bilateral relationship."

Twitter reaction also came in from the United Kingdom. British Prime Minister Theresa May congratulated Trump, and linked to a Facebook statement celebrating the "enduring and special relationship based on the values of freedom, democracy and enterprise" that she believes exists between the U.S. and Britain.

I would like to congratulate Donald Trump on being elected the next President of the United States. Full statement: https://t.co/7W2feuodUE

Lead ‘Leave’ Brexit campaigner and U.K. Foreign Secretary Boris Johnson also got in on the act.

French president Francois Hollande posted a video of his thoughts (in French) stating that "peace, the fight against terrorism, the situation in the Middle East" are at stake. "It is economic relations and the preservation of the planet."

Of course, some responses were less veiled in their criticism of the electoral result. As has become his custom, Toronto city councillor and former deputy mayor Norm Kelly tweeted candidly.

I was hoping to tweet this at Trump, but I'm going have to tweet it at all Americans. And this isn't a joke, it's actually sad. pic.twitter.com/01Tb6BiwS4

The Aus Gvt congratulates President Elect Trump. With our shared, enduring national interests, our relationship will continue to be strong. pic.twitter.com/xzeIXVdKIJ

"Congratulations to the new President of the United States Donald Trump and the free American people!"

Congratulations to my friend @realDonaldTrump - an astonishing achievement. #President

Other global politicians provided measured responses to the election results.

Scottish First Minister Nicola Sturgeon expressed that “many in America and across the world, will also feel a real sense of anxiety,” in her official response. She also tweeted a congratulatory message to Democratic nominee Hillary Clinton for her campaign.

Amidst all the criticism of her, I want to say, as a woman, simply this: thank you @HillaryClinton. Your candidacy was a milestone for women

European Council President Donald Tusk also reacted, stating “[w]hile respecting the democratic choice of the American people, we are at the same time aware of the new challenges that these results bring.”

EU & US have no option but cooperation. EU remains strong, reliable partner. We expect same from US & new President. https://t.co/Cfbvr5whaI