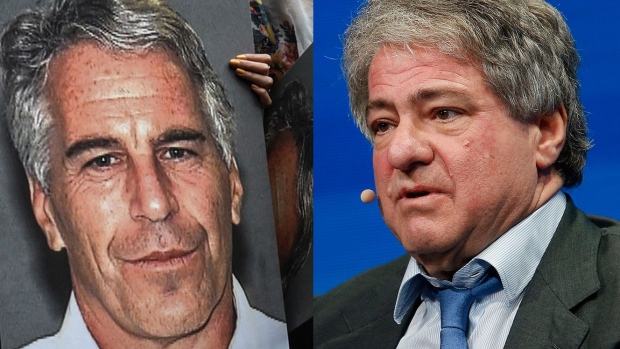 The private equity titan was willing to overlook that Epstein had served 13 months in a Florida jail after soliciting an underage prostitute. That was partly because Epstein claimed the girl had lied about her age, while Black, co-founder of Apollo Global Management Inc., believed in second chances, particularly for his well-connected friend.

Thus continued a relationship between the men that was laid out in a report released Monday by law firm Dechert, commissioned by Apollo’s board after news stories about their financial ties. The investigation found that Black paid Epstein US$158 million between 2012 and 2017 -- after the sex offender pleaded guilty to felony charges in 2008 -- for advisory services that helped expand the wealth of one of America’s richest men.

The report made clear that Apollo never retained Epstein for any services and that he never invested in any Apollo-managed funds. Dechert found no evidence that Black, 69, was involved in any way of Epstein’s criminal activities, and the billionaire maintains he had no knowledge of Epstein’s abuse of underage girls. Still, the findings showed how the disgraced adviser’s knowledge of the tax system and skill managing the affairs of the ultra-rich helped Black save at least US$1 billion, and potentially more than US$2 billion.

At the same time Apollo revealed details of the report, the company said Black would step down as chief executive officer. He’ll remain chairman.

The Dechert report details a friendship going back to the 1990s, with Black impressed by Epstein’s ties to prominent figures in business, politics and science, including researchers at Harvard University and the Massachusetts Institute of Technology. Black was a frequent visitor to Epstein’s Manhattan mansion, confided personal matters to him and visited his homes around the globe.

Dechert also laid out the ways Epstein was useful to Black, who’s worth almost US$10 billion, according to the Bloomberg Billionaires Index.

The business arrangement started in 2012, according to the law firm, which reviewed over 60,000 documents.

Black a few years earlier had set up a Grantor Retained Annuity Trust, or GRAT. These vehicles, which are popular with extremely wealthy Americans, are structured so that appreciation in assets placed in a GRAT can go to heirs without paying U.S. estate and gift taxes. But Black’s had a flaw and there was a risk of a tax assessment of US$500 million, which could rise to US$1 billion or more if it wasn’t resolved.

Epstein offered what the report described as a “unique solution.” It was the first project Epstein worked on for Black and possibly the most valuable.

In 2015, Epstein helped with another transaction designed to save Black’s children on taxes, known as a step-up basis transaction. The complicated arrangement, which took nine months to execute, involved loans between Black and trusts, and avoiding capital gains taxes for his beneficiaries. Epstein claimed the move saved US$600 million.

Epstein, a Brooklyn native, was an enigma to many inside and outside of finance. He attended Cooper Union and New York University’s Courant Institute of Mathematical Sciences but left both without a degree. He briefly had a job at Bear Stearns Cos. and before his first arrest worked extensively for lingerie mogul Les Wexner. The L Brands founder severed ties with Epstein after his first conviction and later accused him of misappropriating “vast sums of money from me and my family.” But Epstein had helped Wexner with his finances and purchases such as real estate.

He did many of those same things for Black.

Epstein helped respond to audits, and advised on how to manage Black’s art, yacht and airplane, according to the Dechert report.

“Epstein would get into the weeds on obscure issues about which otherwise highly competent Family Office employees were not knowledgeable,” the report said.

One of Epstein’s contributions, according to the report, was convincing Black to focus on these issues, as well as meeting with his family and explaining how the estate was organized. He would prepare detailed “fire drill” plans, testing how Black’s estate would be taxed under different scenarios.

Black’s full-time staff didn’t always appreciate Epstein’s contributions. He was “generally a disruptive and caustic force within the family office,” the report said, one who “had a habit of overdramatizing even minor perceived errors.”

Epstein would take credit for others’ ideas, while compiling long lists of his own suggestions. Many of his creative estate-planning schemes didn’t hold up under scrutiny. According to witnesses, including Black, “part of the challenge of working with Epstein was separating the good ideas from the bad ones.”

“What’s bizarre to me is having Epstein in any way in charge of your estate planning,” said University of Richmond law professor Allison Tait. “He didn’t just leave this to his family office staff, who were likely highly competent.”

But the payments racked up. Black paid Epstein US$50 million in 2013, US$70 million in 2014 and US$30 million the following year. He made a US$10 million donation to Gratitude America in October 2015, which was a charitable organization affiliated with Epstein.

That sort of compensation is unusual. Estate planning attorneys and tax advisers are typically paid by the hour or by the transaction. IRS regulations forbid tax practitioners from charging contingent fees “in connection with any matter before the Internal Revenue Service.”

But Epstein, with his atypical role and background, could avoid those rules, said Jay Soled, a Rutgers University professor who is also a practicing estate tax attorney. “This is a very unusual arrangement because he doesn’t really have training.”

Beginning in 2016, “Black and Epstein’s professional and personal relationship deteriorated,” according to the report. One dispute was over a payment tied to the step-up transaction, with Black refusing to pay Epstein tens of millions of dollars that Epstein believed he had earned.

Epstein pushed back on the issue through emails that invoked his friendship with the billionaire and referenced personal matters shared in confidence. Black held firm and at an April 2018 meeting it was determined that while Epstein had played a key role in the deal, the idea came from one of Black’s external lawyers.

Black also thought that the amounts he was paying Epstein would be fully deductible on his tax returns -- because this is what Epstein told him -- and this wasn’t the case.

Black’s last payment to Epstein was made in April 2017, and in 2018, Epstein repaid a portion of two loans that were outstanding to Black but never repaid the balance, according to the report. Black and Epstein stopped communicating in 2018, the year before Epstein was arrested on charges of sex trafficking minors and later died in jail. His death was ruled a suicide.