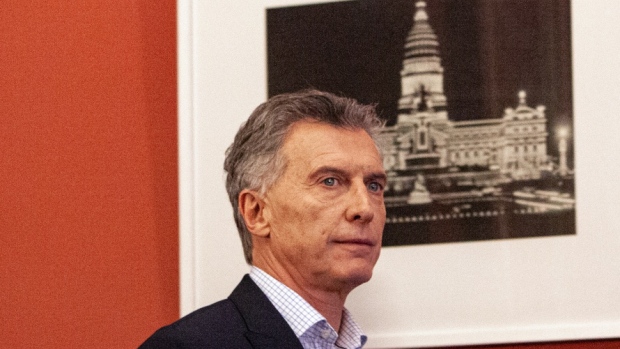 Mauricio Macri, Argentina's president, right, and Miguel Angel Pichetto, the leader of Peronism in Argentina's Senate, arrive for a press conference at the Presidential Palace (Casa Rosada) in Buenos Aires, Argentina, on Monday, Aug. 12, 2019. The cost of hedging Argentina’s sovereign debt against losses soared to a multi-year high Monday after President Mauricio Macri was unexpectedly defeated by a landslide in a primary vote. , Photographer: Erica Canepa/Bloomberg

(Bloomberg) -- After two sovereign defaults this century, small business owners in Argentina are well versed in navigating times of crisis. But even they were left floundering by the latest rout.

Monday’s historic plunge by the peso -- which fell more than 24% at one point -- translated into overnight losses for some store owners. Others puzzled how much to pay for their basic ingredients. With presidential elections still ten weeks away, all were left wondering how much worse it can get.

“Argentina is a see-saw that comes and goes,” said Ruben Haleblian, a vendor in a Buenos Aires electronics store.

A plunging peso means goods denominated in dollars soar in price. With the exchange rate in free fall, Haleblian was instructed by the store’s owner to price all products, which are imported, at 62 pesos per dollar. The result was that everything from an SD memory card to a Samsung phone got 40% more expensive -- and clients walked out the store as soon as he told them the price.

“I’m clawing my way to the end of the month,” he said.

Or take Pablo Ricatti: The company he runs makes buns for hamburgers and hot dogs in Buenos Aires province, but the currency meltdown means he now has no way of knowing what is a fair price for flour. After markets closed, he learned that his supplier had jacked up his price 59% from Friday.

“I’m not going to accept that price, it’s way more than the peso depreciation,” said Ricatti, who faces a challenge of his own in deciding what to charge his clients. “We have enough supplies to sell for the next two weeks, and we can hold our prices for the time being,” he said. “But if the peso remains out of control, we’re raising prices.”

Argentines have seen sharp bouts of peso weakness before, most recently in August last year, when a 25% depreciation on a single day pushed the government to boost the size of a record loan with the International Monetary Fund. In 2015, when President Mauricio Macri lifted capital controls, the currency weakened as much as 30%. Those kind of swings make it hard for Argentines to keep up any pretense of business as usual.

Monday’s sell-off was part of a broader dump of Argentine assets following opposition candidate Alberto Fernandez’s trouncing of Macri in a weekend primary vote seen as a harbinger for October’s presidential elections. Speculation over the kind of economic populism that might be pursued in office by Fernandez and especially his running mate, former President Cristina Kirchner, have investors alarmed.

Yet while the result took pollsters and investors by surprise, it reflected popular discontent over Argentina’s direction amid recession, austerity and inflation running at more than 50%.

The upshot is a disconnect between the electorate’s preference for a potentially protectionist and interventionist government to help dig them out of economic hardship, and investors’ desire for a continuation of Macri’s market-friendly policies to regain the trust of international markets. That divergence risks more economic pain for the foreseeable future.

On the ground, business owners in the downtown area of Microcentro, where boarded-up shops dot the landscape, have resigned themselves to more losses. Rafael Fagenblat, 47, owns a leather goods store downtown and has a workshop in Boedo where he manufactures handbags, belts and jackets. Because leather prices track the dollar, he’s lost about 25% on sales he made at the end of last week, as payments were set to be received through a local mechanism of deferred checks.

On Monday, he kept his peso prices at Friday’s level, even though he knows replenishing stock will be way more expensive. That’s because sales are weak anyway, and there’s no point in hiking prices. Customers are scarce with the economy as it is, and the end of government subsidies mean higher utility prices further adding to his costs.

“I was doing better under Cristina,” he said, referring to Macri’s predecessor. “Now, my fixed costs keep rising, but sales don’t keep up. Macri didn’t understand our needs.”

Some business owners, like Julian Diaz, who runs three restaurants in Buenos Aires, are conflicted. He’s concerned for customers who can barely make ends meet, but at the same time has had to put plans on hold to open two new restaurants due to the weak economy.

While he’s glad to see Fernandez ahead, he said he hopes the sell-off will stop. “I feel long-term optimism but short term concern,” he said.

--With assistance from Carolina Millan.

To contact the editors responsible for this story: Daniel Cancel at dcancel@bloomberg.net, ;Alan Crawford at acrawford6@bloomberg.net, Robert Jameson, Walter Brandimarte