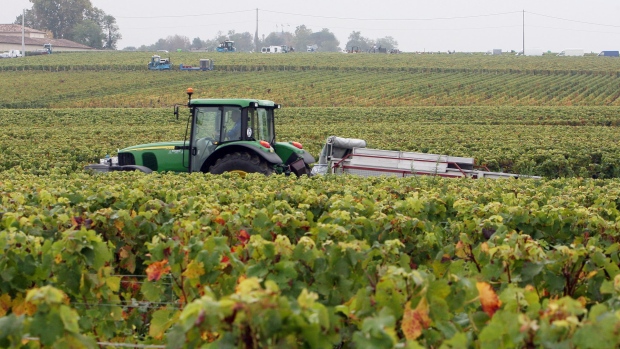 When her father died in 1980, Corinne Mentzelopoulos inherited a business empire that included 1,600 grocery stores, 80 buildings in central Paris, a hotel that was once the home of Louis XIV—and a run-down vineyard the family had purchased almost on a whim three years earlier.

Today, the vineyard has made her a billionaire. It’s Chateau Margaux, one of just a handful of properties that can claim the prized Premier Cru designation bestowed by Napoleon III in 1855 upon Bordeaux’s very best terroirs for making wine.

“Margaux is not just a company, it’s something so special,” says Mentzelopoulos. “The light is always different. It’s extraordinary in the fall. I get emotional talking about it.”

Her father, a Greek-born supermarket tycoon, paid a relatively modest 72 million francs (US$16 million) for Margaux in 1977 after it had languished on the market for two years. The explosion in demand for fine wine over the past four decades, and a growing crop of billionaires willing to pay top dollar for trophy assets, mean a first-growth estate like Margaux could easily fetch US$1 billion—though Mentzelopoulos says her ideal buyer is “no one.”

Even if she’s not interested in selling, the potential price makes Mentzelopoulos one of France’s wealthiest women and Margaux, with just 81 employees, one of the world’s smallest billion-dollar businesses. The vineyard’s 262 hectares (647 acres) of prized gravelly soil produce about 280,000 bottles of wine a year, which can retail at more than US$1,000 each for recent vintages.

As the ranks of the super-wealthy have swelled, fine wine has moved from esoteric hobby to mainstream investment, collected by a quarter of the world’s rich, according to Barclays Plc. With affluent Chinese oenophiles driving demand, wine has become the second-best performing luxury asset, behind classic cars, property consultancy Knight Frank says.

Mentzelopoulos declines to share financials, but analysts estimate the chateau’s annual revenue at roughly US$100 million. With Premier Cru estates yielding profit margins between 70 per cent and 99 per cent, that would mean operating income topping US$70 million. Even better, Margaux is paid upfront by merchants, and some wine is sold en primeur, a kind of futures system where a vintage is bought—and paid for—while still in the barrel, a full year before it’s delivered.

But those financial details would be of little interest to a prospective buyer. Nor would the neoclassical manor house known as the “Versailles du Medoc,” the stocked cellars, or the Norman Foster-designed winery. If Mentzelopoulos were to sell, the price would largely hinge on one thing: The purchaser’s desire to own something unique in the world.

“The name Margaux is so iconic,” says Michael Baynes, co-founder of Vineyards-Bordeaux, an investment advisor affiliated with Christie’s International Real Estate. “There’s never going to be another 1855 classification," he says. “As a seller, you’re in such a powerful position.”

When Mentzelopoulos was in her mid-20s, her father, Andre, spotted a newspaper article saying the family that had owned the vineyard for more than five decades was trying to sell. Following a brief tour of the grounds, with its acres of vines, cobblestone courtyards, and chateau modeled after the Parthenon, he agreed to buy the estate in a handshake deal on the sweeping staircase leading up to the house. He “immediately grasped the importance of how unique Margaux was,” says Mentzelopoulos.

The hermetic world of Bordeaux vintners, negociants, and tasters was aghast that a foreigner who spoke imperfect French and drank middling wine would be the torch bearer of such a storied property. But it was a tarnished asset. Mediocre vintages, a scandal over fraudulent labels, and a collapse in wine prices after the 1973 market crash had left vineyards across Bordeaux in a state of neglect, with few potential buyers.

“This was the middle of the 1970s, the oil crisis,” says Alexander Hall, founder of Vineyard Intelligence, a consultant to wine-estate buyers. “There weren’t oligarchs. Asia wasn’t on the map. The economy was pretty much in the doldrums.”

The Mentzelopouloses decided to invest for the long-term. They tore out and replanted vines, bought new vats, and brought in a wine consultant—unheard of at the time—who helped them choose new oak barrels, pinpointed the ideal date for grape-picking, and oversaw the reintroduction of a second wine, a less-expensive offering called Pavillon Rouge.

The son of an illiterate innkeeper, the elder Mentzelopoulos made a fortune trading grain in India and Pakistan. After meeting the French woman who would become his wife while skiing in the Alps, he moved to Paris and bought Felix Potin, a grocery chain whose small shops were fixtures of street corners across France. With competition from larger supermarkets growing, Corinne sold the business in 1983.

Mentzelopoulos is grooming the second of her three children, 32-year old Alexandra, to succeed her—a move that both honors her father’s legacy and softens the blow of France’s hefty inheritance tax. Though Alexandra lives in London, where she owns a wine bar and restaurant, she travels to Bordeaux at key times such as the harvest and the blending of the new wine.

“Because it’s a family business, I want to be trained in every part of it,” Alexandra says. “After 500 years, you can’t be too big for your shoes and think you can change everything.”

And should the family ever decide to sell, there are more potential buyers than ever: China alone has hundreds of billionaires, and the wealthy are snapping up Bordeaux properties. Tech entrepreneur Jack Ma owns a vineyard in Entre-Deux-Mers that makes acclaimed rose. Hong Kong developer Pan Sutong has three: two in Pomerol and one in Saint-Emilion. France’s richest person, Bernard Arnault, owns the prestigious Cheval Blanc estate through LVMH. His luxury rival, Kering founder Francois Pinault, lays claim to the Premier Cru Chateau Latour.

“Chateau Margaux is clearly an outlier in the galaxy of Bordeaux,” says Philippe Masset, a finance professor at the Ecole Hoteliere de Lausanne, who calls the property a “superstar” that can command an exceptional premium.

While Margaux’s value is limited by only what a besotted billionaire might be willing to pay, its growth prospects as a business are far more constrained. “You can never increase the volume,” says Mentzelopoulos. “People say to me, ‘Oh, you’re like Hermes.’ No. Hermes can open 100 more stores if they want to. I can’t.”

Other estates have ventured abroad for growth, like Chateau Mouton-Rothschild partnering with California’s Mondavi to create the inky Napa-grown blockbuster, Opus One. Mentzelopoulos dismisses the idea. “It would do a lot for the place you buy,” she says. “But what would it bring Margaux?”