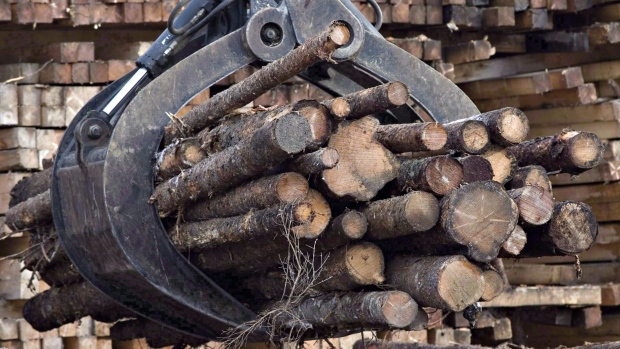 A trio of publicly-traded Canadian timber companies have been slapped with specific preliminary tariffs by the U.S. government, as Donald Trump’s administration takes aim at an industry he decried is unfair to American producers. It’s the latest volley fired in what has long been a contentious trade file, one that has elicited a number of challenges under the North American Free Trade Agreement.

Here’s a look at what’s at stake for the public companies singled out by the United States.

West Fraser (WFT.TO) is facing the harshest tariff, clocking in just shy of 25 per cent. The Vancouver-based producer derived 56.8 per cent of its first-quarter revenue from the United States, though that was lower on a percentage basis than the 57.6 per cent a year ago.

West Fraser does have some degree of a natural hedge, as 37 per cent of its 6.3-billion board feet of production is located in the southeastern United States.

In a research note, RBC Capital Markets Analyst Paul Quinn tagged the company as being the worst-positioned of those hit with the tariffs. “As for biggest losers of today's announcement, we highlight West Fraser as the company with the greatest near-term impact,” he wrote Tuesday.

Canfor (CFP.TO) has seen the U.S. share of its revenue pie rise steadily in recent years, hitting 58 per cent in 2016 from just 39.5 per cent five years ago. The company has been riding a sustained increase in U.S. lumber demand due to robust housing starts in the wake of the great recession, along with recent weakness in the Canadian dollar.

Canfor has a much smaller U.S. production footprint than West Fraser, clocking in at 28 per cent as the company retains its focus on British Columbia, which accounts for 65 per cent of production.

In spite of that, Raymond James upgraded the stock on Tuesday, with analyst Daryl Swetlishoff citing its valuation relative to peers. “Given its lower relative preliminary [countervailing duty] and pressure from recent downgrades we are upgrading Canfor to Strong Buy and expect shares to stage one of the stronger relief rallies,” he wrote. Shares in the company rose as much as eight per cent in early trading.

Despite being smacked with the lowest countervailing duty of any of the publicly-traded lumber companies singled out by the U.S. Commerce Department, Resolute Forest (RFP.TO) did not take part in the early relief rally. Resolute’s revenue line has been increasingly U.S.-dominated, with the company generating just shy of seven of every 10 dollars south of the border.

RBC’s Quinn wrote that while it fared relatively better than its larger peers, the duty is still a net negative for Resolute’s stock. “With [Resolute] enjoying the lowest preliminary CVD rate among its Canadian peers, we see the news as a relative positive for the company,” he wrote. “Given that all of Resolute's lumber capacity resides in Canada … this news should still be viewed as a negative overall.”

While the U.S. only singled out the above three companies, RBC says that Interfor (IFP.TO), Tembec (TMB.TO) Western Forest Products (WEF.TO) and Conifex (CFF.TO) will also be affected.