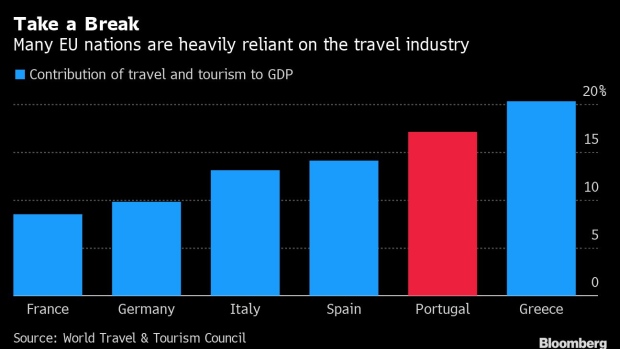 (Bloomberg) -- As populism tested the ability of Europe’s mainstream parties to adapt, one country stood out as an exception: Portugal. General elections on Sunday are likely to cement its status as an oasis for the political center.

Yet it’s not without risks. Prime Minister Antonio Costa of the center-left Socialist Party has only a slight edge in some polls over the center-right party PSD led by Rui Rio.

That means that while Costa may win, he will likely fall short of an absolute majority and may need backing from his usual allies on the left to get budgets approved. If Rio creates alliances that enable him to secure an absolute majority, then he could try to form a coalition government.

Toss in the possibility that André Ventura’s far-right Chega emerges as the third-largest party in parliament, and that could increase the difficulty of forming a coalition on the right.

Why is Portugal holding elections early?

Costa, 60, has held office since 2015. His second term was cut short in October after lawmakers rejected his minority government’s 2022 budget, saying he hadn’t met their demands on a range of issues, including a higher minimum wage.

Campaigning ends Friday night, with voting starting at 8 a.m. on Sunday and exit polls released at 8 p.m. People isolating due to Covid-19 will be allowed to leave their homes to take part.

It’s the third time Portuguese head to the polls since the pandemic started, after a presidential election and local elections earlier in 2021.

What is Chega and how strong is it?

Chega, which translates as “enough,” was founded by Ventura and first won a seat in parliament in 2019.

Like other populists, 39-year-old Ventura advocates headline-grabbing measures like life imprisonment for violent crimes and a single income tax rate. He has also tried to take advantage of a perception that corruption is rife among the establishment.

Even if Chega were to be excluded from a governing coalition, it could still cause problems by voting against legislation, and crucially the budget.

Portugal’s multi-party system has been dominated by the Socialists and the PSD since the 1974 revolution ended four decades of dictatorship. And there are about eight smaller parties in the 230-seat parliament.

What are the main election issues?

Top concerns include wages, pensions, the tax burden and affordable housing in cities.

Covid-19 is of course also still on voters’ minds. In January 2021, Portugal had one of the world’s worst outbreaks, forcing the government to impose strict confinement measures. The country now has one of the highest global vaccination rates, and despite record cases in recent weeks, there hasn’t been in a surge in occupancy at intensive-care units. The government eased restrictions earlier this month.

What’s the state of the economy?

The next administration will take on an economy trying to bounce back after the pandemic, helped by EU recovery funding that began to flow last year. The government said in April that the European pandemic recovery plan will have an economic impact of 22 billion euros ($25 billion) in Portugal through 2025, and estimated that GDP in 2025 will be 3.5% higher than it would be without that plan.

Portugal’s 200 billion-euro economy is recovering after shrinking 8.4% in 2020 —  the most since at least 1960 — as the pandemic hurt tourism and other businesses. For Portugal, which has the third-highest debt ratio in the euro area behind Greece and Italy, tourism represents about 15% of the economy and 9% of employment.

In the rejected spending plan, it aimed to narrow the budget deficit to 3.2% of GDP in 2022.

What will bonds do?

There wasn’t a big bond market reaction in October to the political developments that led to the snap election being called. Analysts aren’t expecting one now either.

Given the country’s debt pile, governments have to keep borrowing costs in check. Portugal’s 10-year bond yield was at 0.59% on Thursday, up from 0.19% six months ago but still lower than the rate for Italy or Spain. It peaked at 18% in 2012 at the height of the euro region’s debt crisis.

What are the main differences between Rio and Costa on the economy?

Both Costa and Rio pledge budget discipline. The ruling Socialists say they offer stability and further improvements in household incomes, including raising the minimum wage again, and increasing investment in healthcare.

The PSD party under Rio wants to lower the corporate income tax rate in steps from 21% to 19%, and then to 17%. Rio also says he’d privatize airline TAP SA, again. Under Costa, the government regained control of the carrier.

The opposition leader says the economy should grow faster, and points out that the country has been overtaken in terms of gross domestic product per capita by eastern European nations that joined the EU later, including the Czech Republic and Slovenia.

An economist and former mayor of Oporto in northern Portugal, the country’s second-biggest city, Rio overcame a party leadership challenge at the end of last year and hasn’t ruled out cooperating with a new Costa government if his party loses the election.

“The country will continue to pursue a centrist economic policy regardless of whether the PS or the PSD leads the next government,’’ Antonio Barroso, deputy director of research at Teneo, said in a note.