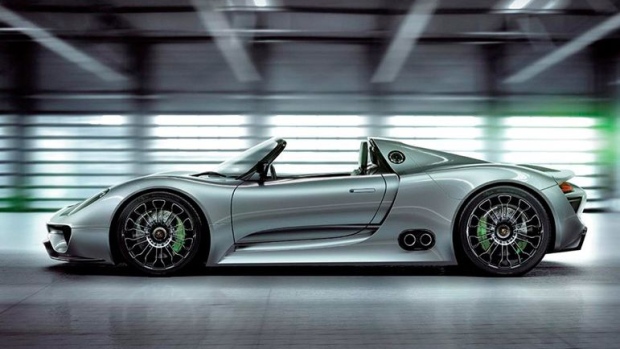 The Porsche 918 is a hybrid sports car that reaches 60 mph in less than three seconds. It’s currently valued from $1.5 million to $2 million, according to recent sales on BringaTrailer.com. Source: Porsche , Hannah Elliott

(Bloomberg) -- I can’t be the only one puzzled that a fictional billionaire wunderkind out to save the world would pick a Porsche 918 Spyder as the crown jewel among all of his possessions on display at his private island in Greece.

Yes, I’m talking about Glass Onion: A Knives Out Mystery. If you haven’t seen it yet, you’ve definitely heard from someone who has.

Netflix Inc.’s first film to run as a limited release in major theaters (before moving to streaming on Dec. 23) is on track for big success. It was projected bring in $15 million in North America by the end of its seven-day run; last weekend, it made about $19,000 per screen on the nearly 700 theaters that showed it, exceeding sales for every other film out.

A sequel to the 2019 hit whodunit, Glass Onion feels like watching Clue mixed with a generous dose of Columbo, with Daniel Craig returning as detective Benoit Blanc. (He’s the only character from the first film to appear in the second.) Draped in stripes and with a distracting Southern drawl, Blanc joins a group of friends on the private Greek island of billionaire Miles Bron, played by a very Matthew Perry-like Edward Norton.

Bron parks the Porsche, which he calls “my Baby Blue,” on a giant rotating platform at the top of his glass-domed compound. There, he can sit and admire it along with the rest of a collection that includes work from real artists, such as the 80-inch infinity light icosahedron sculpture by LA’s Anthony James. Painted in a factory color called Liquid Metal Chrome Blue, the car sits on display, not in a garage or driveway; on the island there are no roads, anyway, he tells Blanc. Bron doesn’t travel anywhere in the world without it.

He even has a tiny, toy version of the Porsche, kind of like these Little Cars, which he uses as a poolside cooler for Jared Leto-branded hard kombucha. Excessive name-dropping is one of the running gags that makes the movie so much fun—and that’s as much as I’ll say about the plot. You can read our review here.

Still, we should discuss the car. It just doesn’t fit.

I have nothing against the Porsche 918 Spyder. It’s a major sports car. Unveiled in 2013 with production limited to an on-the-nose 918 units, its V8 engine paired with a hybrid motor can hit 62 mph in 2.6 seconds and has a top speed of 214 mph. I drove one up the hill during the Goodwood Festival of Speed; it was blazingly fast and nimbler than a con artist on the run.

The 918 is even more astounding when it has the Weissach Package. That special $84,000 option shaves off 90 pounds and therefore makes the car even faster. A 918 with Weissach treatment will go to 62 mph in 2.5 seconds, which beats the famous Ferrari LaFerrari.

The Weissach 918 is more valuable, too. In June, a 918 Spyder Weissach Edition sold for $2 million on BringaTrailer.com. One without Weissach sold for $1.6 million in October. From what I can tell by the wheels on the one in the film—which are the wheels that came on the standard 918—and from the car’s lack of visible carbon fiber on such things as the roof and rear-view mirrors, it seems that Bron’s 918 does not have the Weissach Package. (A Porsche spokesperson confirms that Porsche Cars North America provided the vehicle at the request of the filmmaker.)

Here’s the thing: Even with a multimillion-dollar price tag, why would Bron, a character based on Elon Musk, who brags about his plan to save the world with a new source of sustainable fuel, even own a car that uses gasoline at all? (Electric-only range in the 918 is 12 miles.) Bron would be better outfitted with an ultramodern, purely electric hypercar like the Rimac Nevera or Pininfarina Battista, the ultrarich-style electric Rolls-Royce Spectre, or even an updated Cybertruck—which would have been a hilarious nod to Musk, even through the truck may never actually start production.

If not a pure EV, the least Bron could own is a new hybrid sports car that actually debuted this year: the Ferrari 296 GTB, not something that was discontinued seven years ago—which is forever in car technology years.

Those classic supercars are far rarer than the 918 Spyder, far harder to obtain and maintain, and therefore more valuable as status symbols. The 918 Spyder is well on its way to join that list, but it needs to age about 20 years further to join their elite rank.

Then again, as I think on it, maybe the Porsche 918 Spyder is exactly the right car for Bron. Another running gag throughout the film is that the tech billionaire uses the wrong words for things or makes up words altogether. (When friends arrive on the island, he tells them to “inbreathiate” the moment: Ugh.) The 918 Spyder is the automotive equivalent. So close to correct, and yet ...