It's been almost two years since Canada legalized cannabis and pot producers have spent millions of dollars marketing their wares in the hope that consumers would know their Tweeds from their Trailblazers.

Most of that money may have been completely wasted, according to a new survey that looks at how well Canadians can identify some of the brands available at legal pot shops across the country.

The survey, published by Brightfield Group, polled 3,000 Canadians in the first quarter of the year. It found that brand awareness remains low, which is confusing consumers and resulting in "decision fatigue." Roughly two out of every five respondents said they were aware of Canopy Growth Corp.'s Tweed brand, while 17 different brands had less than 20 per cent name awareness. 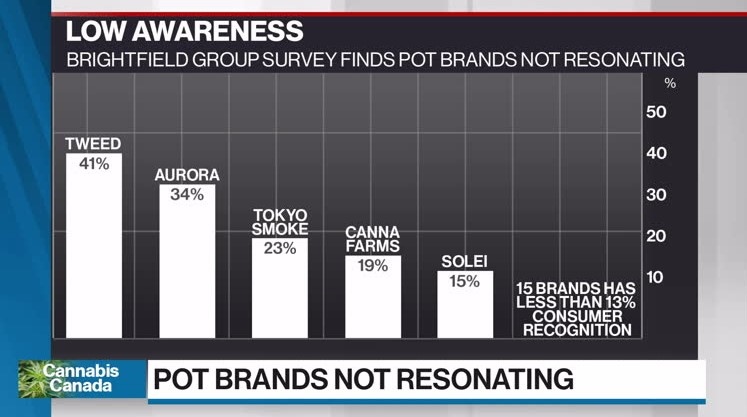 It's a scenario where consumers are often left to decide their purchases by price and not by brand name, packaging, or a review from a friend, Brightfield's survey found.

"The cannabis market is still pretty nascent," said Bethany Gomez, managing director of the Brightfield Group, in a phone interview. "Brands haven't moved up the ladder from functional marketing to building a connection with consumers."

Compared to alcohol and tobacco products, the legal cannabis market is still in its infancy. As a newly regulated product, cannabis brands need to abide by strict rules that limit how they are designed and named, a decision the government made to curtail youth consumption.

Producers also have to contend with a still-thriving illicit market, which doesn't abide by government restrictions and brazenly markets their products without any warning logos or labeling. Additional restrictions include limits on marketing cannabis products online and inside retailers. Consumers also have to contend with a confusing list of cannabis strain names that are often different than what they were familiar with before legalization.

"My managers tell me all the time that the number one question we get asked is: 'What is your highest THC product?' not 'What brand is it?' That's what moves first," said Michael Serruya, who runs Serruya Private Equity Inc. and owns six stores in the Toronto area.

Last month, Aphria Inc. laid off its chief marketing officer amid a recent push to restructure its brand portfolio. In an investor presentation earlier this month. Canopy Growth outlined its plan to reduce the total number of items it sells to help avoid consumer confusion, while showing a glimpse of new market research the company will use to better target its products to customers.

"We previously built a strategy where we were first to market. We're now trying to deliver consumer expectations," said David Klein, Canopy's chief executive officer, in a phone interview.

With nearly two years of sales under their belts, major cannabis producers now have to fight for shelf space with smaller, more agile players who have waited on the sidelines and avoided some of the early mistakes seen during the first days of legalization, Brightfield's Gomez said.

High 12 Brands is one of those new players in the market. The company struck a supply deal with Aurora Cannabis Inc. to provide it with cannabis for its Kingsway offering, choosing to spend its resources on marketing two different strains rather than growing it themselves. It's a strategy that High 12's president Michael Garbuz utilized when he served a strategic role at Origin House, a company that distributed cannabis brands to the California market.

Even before cannabis was legal in Canada, "People were just pumping money into general marketing, which may have been good for companies' stock but none of its went into an actual product or brand development," Garbuz said in a phone interview.

Garbuz said Kingsway in on track to achieve about $10 million in sales in its first year but expects brands to begin resonating with people as more different and unique products, such as vapes or edibles, hit the market.

Meanwhile, some marketing tricks that producers hoped would sidestep cannabis regulations have fallen short of expectations.

Canopy, which has spent years and millions of dollars developing partnerships with Drake, Seth Rogan, Martha Stewart, and Snoop Dogg, can't even fully leverage those arrangements with its products to avoid running afoul of the law, Klein noted.

"There's not a lot that we can say about it," he said. "We're erring on the side of caution."

Organigram Holdings Inc. also recently encountered the wrath of regulators after releasing its Trailer Park Buds offering to the market. The brand, released in collaboration with the irreverent comedy trio Trailer Park Boys, resembled the show's logo slightly too much for the regulators' liking, said Ray Gracewood, the company's chief commercial officer.

"It was in everyone's best interest in repositioning the brand," Gracewood said in a phone interview.

Gracewood, who led marketing at Moosehead Breweries for nearly 12 years, said he's been resigned to knowing that the company's efforts at connecting its brands with consumers will take more time than originally thought due to the complexities of the industry.

"It's not as simple as picking out what kind of dish detergent you want to buy," he said.