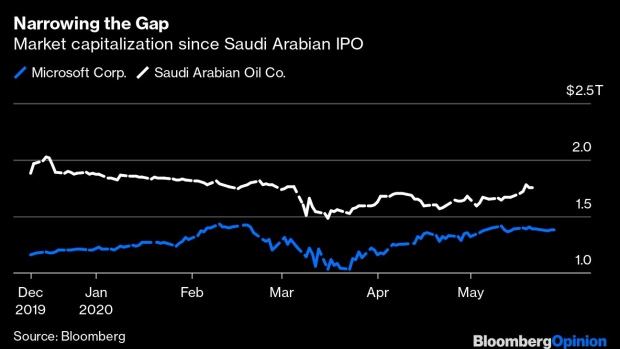 (Bloomberg Opinion) -- Stocks were supposed to be mired in a bear market after they plunged in March as the coronavirus pandemic shuttered business and sent U.S. unemployment to its highest rate since the Great Depression.

Even a 62% recovery by the S&P 500 Index by the middle of May failed to comfort experts like billionaire money managers Stan Druckenmiller and David Tepper , who characterized stocks as the worst investments of their careers. They weren't alone; amid an estimated 47% collapse in gross domestic product, fewer than a quarter of respondents to an Evercore ISI survey said they expected the next 10% move in the market to be higher.

So far, though, stocks have held their own as economic indicators sagged, regaining 37% of their value from the low point in mid-March. “The stock market looks increasingly divorced from economic reality,” a New York Times article on the phenomenon proclaimed.

Or maybe not — not if you think of it as the Microsoft market. No company has defied the pessimism more than Microsoft Corp., and for a lot of sensible reasons. The Seattle-based maker of global business and consumer software led all publicly traded companies most of the year with a $1.4 trillion market valuation, exceeded only by Saudi Arabian Oil Co. which isn't yet freely traded.

Unlike the largest fossil fuel company, which lost 13% since its December $1.9 trillion initial public offering, Microsoft is within 5% of its Feb. 11 record high and appreciated $947 billion since 2015, more than any of the 10 largest companies, including Apple Inc., Alphabet Inc. and Amazon.com Inc. The gap between Microsoft and Aramco narrowed to $229 billion from $840 billion, a trend likely to continue amid weak global growth in the months ahead.

That's because Microsoft, unlike Aramco, is a mainstay of the global economy, developing and supplying 75% of the operating systems used by computers and servers worldwide, according to the market-analysis company IDC.

Microsoft's vast infrastructure and productivity applications enable companies, governments and individuals to navigate increasing social and workforce disruption caused by the pandemic and other disasters stoked by global warming and climate change.

As one of the anchors of the Nasdaq 100 Index (more than 80% are technology firms) Microsoft signifies the growing dependence of the economy on these companies, which this year outperformed the Dow Jones Industrial Average by the most since 2000 (Nasdaq 100 gained 8% as the DJIA lost 10%), according to data compiled by Bloomberg.

“Microsoft could emerge stronger than most of its rivals once the Covid-19 crisis subsides, in our view, as enterprises spend more to upgrade their infrastructure and applications, translating into above-consensus, double-digit sales growth from fiscal 2022-2021,” said Anurag Rana, a senior analyst with Bloomberg Intelligence in a May 15 report. “Its deep portfolio of cloud products, client relationships and security spending are differentiators.”

Such confidence is prompted by the past five quarters, when Microsoft earnings for the first time exceeded forecasts by at least 10% after beating the average of analyst estimates in all but one of the 23 quarters since 2015, according to data compiled by Bloomberg. Unlike its five more glamorous peers — Facebook Inc., Apple, Amazon, Netflix and Google (Alphabet) — Microsoft has an uninterrupted growth rate with the least volatility, according to data compiled by Bloomberg.

To be sure, the Faang companies and similar technology marvels retained much of their value during the Coronavirus pandemic. Netflix has gained 28% since the end of 2019; Amazon is up 30%, Apple 9%, Facebook 10%. Tesla Inc., the maker of electric, battery-powered vehicles, rallied 93% since the end of 2019 and is worth just $59 billion less than No. 1 Toyota Motor Corp.

Tesla anticipated the remotely engaged economy by selling its vehicles online and improving the customer experience with periodic, automatic software upgrades. The traditional auto companies haven't fared well. Bayerische Motoren Werke AG, is down 24% since the end of 2019 and General Motors Co., the largest U.S. auto maker, declined 28% and is worth only 26% of Tesla's current market capitalization of $149 billion, according to data compiled by Bloomberg.

That's why the Dow, once the benchmark of corporate America, is a shadow of its former self as industrial companies represent just 9% of the average, down from 16% in 2000, according to data compiled by Bloomberg.

“Microsoft already had a great relationship with Fortune 2000 tech departments because of its dominance in Windows and Office software products,” said Bloomberg's Rana in a recent interview. “As these legacy companies look to invest more digitally transforming their business post Covid-19, Microsoft should get its fair share of work” — lifting the stock market as it helps transform the economy.