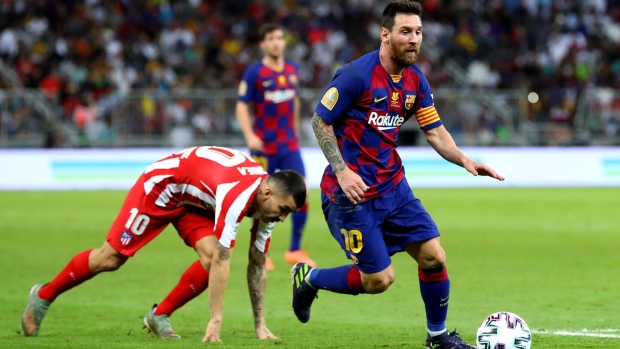 Lionel Messi is breaking up with Barcelona, and the numbers are huge.

Any club looking to bring on the all-time soccer great will have to come up with hundreds of millions of dollars for his salary. And that’s not counting the US$825 million transfer fee FC Barcelona contends it’s owed -- although Messi’s camp believes the fee no longer applies.

In return, his new team could expect US$175 million of value per year if the Argentinian forward stays true to form, according to a calculation from Matt Balvanz, vice president of analytics at Navigate, a data-driven consulting firm in sports and entertainment.

Here’s how it works out:

About 2 million Messi jerseys are sold each year at prices ranging from US$100 to US$200. Teams typically net 15 per cent of apparel proceeds, so his new team could expect about US$45 million from jersey sales alone.

But Balvanz says you can also look to Barcelona’s revenue, which was a chart-topping US$960 million in 2019. Assuming each of the club’s starting eleven is responsible for an equal proportion of those sales, Messi would be worth about US$87 million (that figure includes jersey sales). Take a small leap and assume that Messi’s contribution to ticket sales, media rights and sponsorships is really more than double the average Barcelona player, and Balvanz concludes that Messi could be worth about US$175 million a year.

That’s a staggering sum, but not far off what Transfermarkt has pegged Messi’s value at in the past. In 2018, the soccer website valued him at US$198 million. It has his current market value as US$123 million.

Using the same logic, Messi’s potential exit would probably end Barcelona’s standing as the richest club in soccer. And it would give a significant revenue boost to whichever team decides to sign up a 33-year-old who became synonymous with Barca’s successes on and off the field in recent years. Manchester City, which is currently favored to take him on, is sixth in Deloitte’s Football Money League.