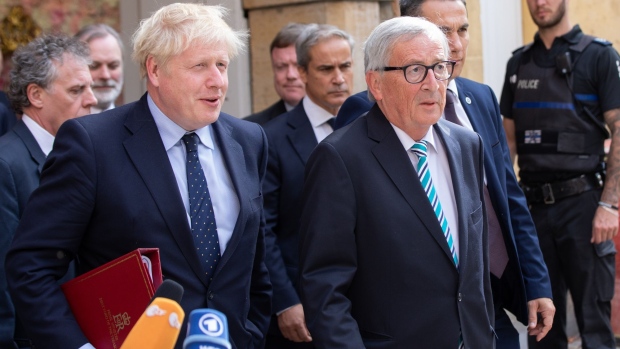 British Prime Minister Boris Johnson and European Commission President Jean-Claude Juncker emerge after having a working lunch together in a restaurant in the city center on September 16, 2019 in Luxembourg, Luxembourg. This is the first time Johnson is meeting with Juncker since Johnson became prime minister. Johnson is pressing forward for a possible hard Brexit, though he has been also meeting with European leaders recently in an apparent effort to still strike a Brexit deal. , Joshua Sammer/Getty Images

(Bloomberg Opinion) -- No news can be good news sometimes. The logic of past Brexit negotiations suggests that the less we hear about what’s happening in intensive Brussels talks, the greater the chance that those talks are getting somewhere. Once the details start to leak and the anonymous briefings start, what’s left tends to be dead on arrival.

Yet even with scant details on the new negotiations between the Brits and the EU, or what concessions either side might have made to activate them, it’s possible to draw some conclusions about what’s being discussed.

First, what it doesn’t mean. The quiet luxury wedding venue in Cheshire, where U.K. Prime Minister Boris Johnson met with his Irish counterpart Leo Varadkar on Thursday (discovering a “pathway to a possible deal”) is a long way from the Justus Lipsius building in Brussels, or wherever the nitty-gritty of any possible Brexit deal might be thrashed out. As my colleague Lionel Laurent wrote on Friday, negotiations don’t mean an agreement is a sure thing; there are many degrees of separation between the parties.

Any deal must satisfy three requirements if it’s going to fly politically in the U.K. and the EU. It must let Johnson bring Britain out of the bloc by Oct. 31 or very soon after, as he has promised his supporters. Second, Northern Ireland must be deemed part of the U.K. customs territory for any future trade deals struck by Britain. Third, an agreement would have to avoid customs checks in Ireland that would threaten either the Good Friday peace settlement or the EU’s single market rules.

Once a deal ticks those seemingly contradictory boxes, it must also pass muster with the Democratic Unionist Party of Northern Ireland. The DUP leader Arlene Foster gets very twitchy about anything that separates Northern Ireland from the rest of the U.K. Without her support of any compromise agreement, it will be very difficult for hardline Brexiters in Johnson’s ruling Conservative Party to back a deal. That means Johnson would have to rely on Labour MPs if a deal came to a parliamentary vote, although he’d be unlikely to put his initials on one without some assurance of support from his own side.

The window in which to sell any agreement would be small. If, as many suspect, Johnson is considering a variation on part of his predecessor Theresa May’s maligned Chequers deal — a “customs partnership” with the EU but that includes only Northern Ireland rather than her plan to include the whole of the U.K. — agreement would be difficult to secure and implementation would be messy. It would also be ironic since Johnson resigned over May’s plan and the EU rejected it out of hand.

There’s nothing in Johnson’s past that suggests he’s a slave to his positions, quite the contrary. He’s perfectly happy, shamelessly so at times, of changing with the wind if it delivers political victory. By contrast, everything in the DUP’s history suggests that it doesn’t budge even when the case for doing so is compelling. It says it won’t accept Northern Ireland staying in the EU’s customs union.

Ireland’s own position is delicate too. Any Varadkar concessions would need to be less onerous than the cost to Ireland of accepting no deal. Each side will be doing rapid calculations of whether a deal works better than the ugliest alternatives.

You can see why there’s been an 11th hour push, though. If Varadkar and Johnson hadn’t found their “pathway,” there wouldn’t have been much to discuss at next week’s EU council meeting other than an extension to the Halloween Brexit date.

That would have been grim for Johnson, who’s been forced by his own parliament to seek an extension if he can’t strike a deal. For someone who won the Conservative leadership on a promise of leaving on Oct. 31, “no ifs or buts,” having to ask for a delay is an unappetizing prospect.

On the EU side, they’d no doubt rather get this done and move on to other things before a new European Commission takes its seat and before a new budget is voted on next year; especially if they can avoid chucking Dublin under a bus.

Even though the two sides haven’t yet entered the famed negotiating “tunnel,” where they pore over the draft legal text of an agreement, at least they appear to be struggling toward the light. That doesn’t mean they’ll get there. But the alternatives of an eternal Brexit process (or no deal) are far darker places.