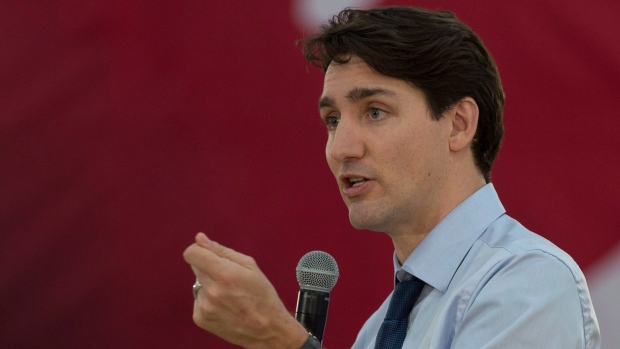 Pressure is mounting on the federal government to take measures to save the Trans Mountain pipeline expansion project before a May 31 deadline set by Kinder Morgan, after the energy giant suspended all non-essential work on the controversial project last weekend.

Kinder Morgan’s abrupt decision is seen as a major setback to Prime Minister Justin Trudeau, who has vowed to get the Trans Mountain expansion project completed.

Trudeau met with B.C. Premier John Horgan and Alberta Premier Rachel Notley in Ottawa Sunday to try and find a resolution to the dispute.

While some experts say Trudeau’s options are limited at this point, others suggest the government has a series of steps at its disposal to get the crucial pipeline expansion, which extends from Alberta to B.C.’s coast, built.

BNN spoke to a range of experts from constitutional lawyers to former politicians to get their take on what the federal government can do next if it wants to save Trans Mountain.

Opposition to the pipeline from the British Columbia government has been one of the biggest hurdles facing the project.

Joe Oliver, former natural resources minister and chairman of Echelon Wealth Partners, suggests that holding back federal funding from provincial projects could be the best way to make B.C. toe the line on Trans Mountain.

“It’s not just a squabble, this is a constitutional crisis relating to the ability of the federal government to do things in the national interest which are in its jurisdiction. They could declare this work for the general advantage of Canada.”

“They could, I suppose, bribe them with additional promises. They could let the province of Alberta take the retaliatory action they intend to take, and at the end of the day, if that doesn’t change B.C.’s mind, they could I suppose provide some sort of a financial backstop to the company and say, ‘Look, if you throw another billion dollars and this doesn’t go ahead, we’ll cover the cost.’”

The cost of delaying the pipeline has resulted in the loss of billions of dollars in revenue to Alberta’s oil patch and counting, according to experts. Dwight Newman, Canada research chair in indigenous rights in constitutional and international law at the University of Saskatchewan, says B.C. could be threatened with footing the bill for causing more interference.

“The federal government needs to take steps to restore confidence that the legally-approved project will not be subject to interference and uncertainty.  There are various creative ways to do that.  There would be means of using federal legislation or regulation to make entirely clear that B.C.’s steps are not going to be allowed to interfere.”

“There would also be the possibility of committing to indemnification of any costs faced by the project arising from any further interference, perhaps with a plan to charge that back from the interfering province.”

Proponents of Trans Mountain have argued that the project is in the national interest of the country. James Coleman, professor at the SMU Dedman School of Law, says if the Trudeau government is really committed to the pipeline, then it should pay for the project to be completed, no matter what Kinder Morgan does.

“He [Trudeau] can invest in the pipeline or try to punish B.C. to get it to back down. If he’s willing for the government to buy out the pipeline and build it itself, he should ultimately be successful.”

“But, as long as Kinder Morgan has money on the line, we don’t know what level of uncertainty will be too great for them to go forward. Certainly, it’s hard to see how the legal issues could be resolved by the May 31 deadline that Kinder Morgan has insisted on.”

REACH OUT TO PROVINCES

Many experts have said that public opinion of Trudeau and the Liberals could take a big hit if the Trans Mountain project falls through, considering it was one of his key election campaign promises. Nik Nanos, chairman of Nanos Research Group, says the prime minister needs to take a more direct approach to ease tensions between the two Western provinces if he wants to salvage the project.

“I think the prime minister has to put some political capital into the game and intervene directly and to engage directly with both of those premiers and try to find some sort of path forward, because people expect the prime minister of Canada to intervene in terms of the nation’s interest and to make sure our federation works well in terms of creating prosperity, jobs and respecting our environmental aspirations. “

Kinder Morgan’s surprise move to suspend funding on Trans Mountain has been viewed as a shift of power from those who support the project to those who vehemently opposed it. Ian Blue, senior counsel on constitutional law at Gardiner Roberts LLP, says Trudeau needs to exhibit “a solid act of leadership” and that he may have some legislative actions at his disposal.

“I believe what the prime minister should do is make a statement by ministers in the House of Commons in the very near future, where he says it’s the policy of the government of Canada that the Kinder Morgan pipeline shall be built without interference forthwith.”