Monday’s U.S. market action was wilder than most in its history, with the S&P 500 falling about four per cent before ending slightly higher.

While positive turnarounds are often viewed as a good sign, that might not be the case here. According to calculations by Bespoke Investment Group, Monday was the sixth time since 1988 that the Nasdaq erased a four-per-cent-plus intraday decline to close higher on the day. On previous occasions the tech-heavy gauge saw a median decline of 5.5 per cent one month later and a drop of 7.9 per cent three months down the line.

As investors try to gauge the impact of everything from Fed tightening to the impact of the pandemic and geopolitics like Russia-Ukraine, markets are becoming more volatile. The Cboe Volatility Index, or VIX, closed just shy of 30, compared with its lifetime average around 19.5. Strategists tracked by Bloomberg are still bullish, with their average forecast for the S&P 500 at 4,982 by the end of the year compared with its Monday close of 4,410.13 -- but since the gauge narrowly escaped a correction on Monday, many market watchers are likely pondering their expectations. 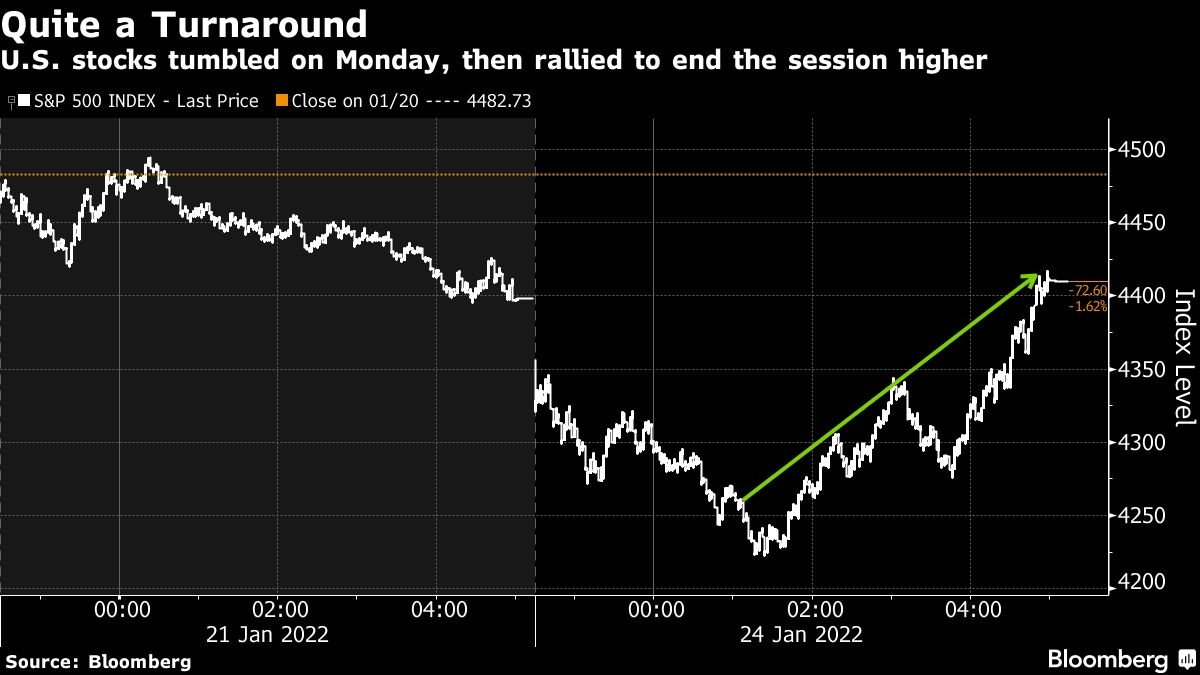 Here are some voices on what’s going on:

“Despite the first signs of stabilizing stocks on Monday, Powell-speak may still be interpreted cautiously as investors did throughout the Chair’s first uncomfortable year in office, before becoming more at ease after the exercise of the ‘Powell Pivot Put’ in January 2019,” Emanuel continued. “Given the steep skew (expensive downside puts, relatively inexpensive upside calls) investors wishing to gain exposure to the S&P 500 while factoring in the potential for sustained elevated volatility could go long the June 30 4,740 call/3,670 put risk Reversal (buy call, sell put). While 2022 is unlikely to be an average year by most measures, the Fed is likely to ‘exercise the Fed put’ should the average -23.8 per cent strike price come into view.”

‘Clown Stocks’ to Fall 90 per cent
“It felt like a near term bottom. The Fed meeting this week is (probably) an upward catalyst,” said Brian Barish, chief investment officer at Cambiar Investors LLC. “Beyond this near term trading setup, it’s clear that the very high multiple and ‘intentional plan to lose money now because the future is huge’ business models - these stocks are in big trouble. The valuations for these kind of things have continued to migrate upward for the last two to three years and some return to reality is in order.”

He continued, “there’s another class of stocks, more the small-cap speculative stuff, that have little valuation relationship with, it seems, anything. I have been calling these the RobinHood stocks, Jim Cramer calls them the ‘clown stocks.’ Well - it’s clear these are in a bear market. The clown stocks could lose 80 per cent to 90 per cent like Nasdaq in 2000-2002. I don’t think that’s crazy to imagine.”

The Low May Be In
My most aggressive tactical indicators have flashed a trading buy signal (HALO-2 & V-squared) reached negative extremes and positively inflected intraday today,” said Brian Rauscher, Fundstrat Global Advisors’ head of global portfolio strategy and asset allocation, in a note Monday. “This is quite similar to the behavior that we saw at both the 12/26/18 and 3/23/20 trading lows that saw the S&P 500 get slammed on a Friday options expiration only to find a trading bottom the following Monday before noon.”

“My work suggests that a trading low is likely in,” he continued, adding that he is less certain that the first-half low has already been reached as pricing in the Fed, inflation peaking and COVID rolling over haven’t run their course yet. “So, it looks likely there is some opportunity for aggressive traders as well as for strategic investors to use the expected bounce to look for higher quality stocks that have been overly sold off.”

Unwinding Leverage
“There’s no question that the ride has been a wild one recently,” said Matt Maley, chief market strategist at Miller Tabak + Co. “Today’s bounce was an impressive one and we did see some signs of capitulation at the mid-day lows. The volume was strong, the breadth was very negative and we did see signs of ‘forced selling’ like margin calls. This should allow the bounce to last for more than just a few hours.”

“That said, the amount of leverage that build up over the past several years will take longer to unwind,” he added. “Therefore, I think we’ve moved into a period where investors should sell the rallies rather than buy the dips.”

Bannister says a number of things need to take place for a stock market low to occur and the bull market to resume -- “but none appear to be in the offing.” They include a dovish Fed pivot that lowers the 10-year TIPS real (after-inflation) yield, a bottoming in the U.S. Manufacturing PMI and a bottoming in S&P 500 quarterly EPS beats minus misses, which has faded since the third quarter.

Missing Skew
“S&P skew (and skew buying power in general) remains weak and low even as we were selling off hard,” said Amy Wu Silverman, equity-derivatives strategist at RBC Capital Markets. “Part of the reasoning -- and this part feels a bit worrisome -- is that folks are just not as long and simply don’t have much to hedge. Instead, investors are not demanding downside protection because they are taking money off the table instead. Interestingly, even as we rallied back this afternoon, S&P normalized skew levels remain close to one-year lows across all tenors.”

Pullback Overdone
“Market worries around rates and corporate margins are overdone,” said JPMorgan Chase & Co. strategists led by Marko Kolanovic, in a note Monday. “The recent pullback in risk assets appears overdone, and a combination of technical indicators approaching oversold territory and sentiment turning bearish suggest we could be in the final stages of this correction. While the market struggles to digest the rotation forced on it by rising rates, we expect the earnings season to reassure, and in a worst case scenario could see a return of the ‘Fed put.’”