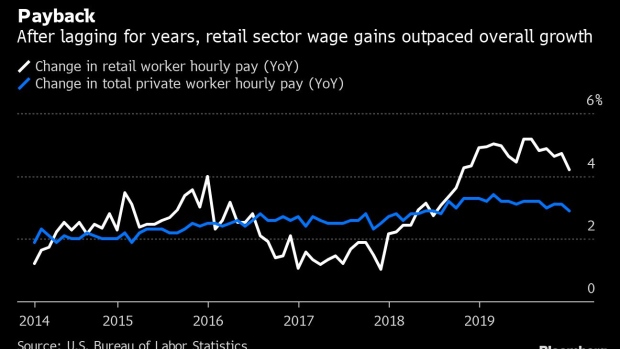 (Bloomberg) -- Who makes $100,000 a year? According to the U.S. government, air traffic controllers do. The academics who teach architects to design buildings that won’t collapse. And maybe soon, the guy who makes your Triple Layer Nachos some bleary midnight.

Taco Bell’s announcement of a pilot program to raise manager pay to white-collar levels could presage a middle-class life for workers who have struggled in a winner-take-all economy. For Alex Torres, who grinds away as a $15.50-an-hour Taco Bell shift supervisor in Chicago, that salary -- roughly triple his current take -- could mean fulfilling a dream of seeing Rome.

“If I had more money it would allow me to do a lot more,” he said Thursday before running to sprinkle two hard-shell tacos with lettuce and cheddar.

The eye-catching move by the Yum! Brands Inc.-owned chain arrives amid a staffing crisis for all sorts of restaurants thanks to an unemployment rate at a 50-year low and after years of employers’ complaints that tight margins made higher wages impossible. Applebee’s, IHOP, Panda Express Inc. and Yard House all are paying up to find people to flip burgers, assemble salads and grill chicken. At Applebee’s restaurants in Woburn, Massachusetts, and Springfield, Oregon, a shortage of line cooks means they can earn $19 an hour.

“It’s the tightest labor market I’ve seen in my career by a wide margin,” said Greg Flynn, founder of Flynn Restaurant Group, whose 460 stores make it the biggest Applebee’s franchisee. “We must and we do pay the wages that it takes to fill the positions that we need.”

Restaurants are hiking prices to compensate, but more expensive meat along with wage inflation is setting up the stiffest margin pressure in more than five years, according to Telsey Advisory Group. “The backdrop for 2020 food and labor inflation adds an ominous tone as the industry has already leaned on consumers in 2019 with some of its highest menu price inflation in years,” Telsey analyst Bob Derrington said.

But without cooks and managers, there won’t be any business at all. Taco Bell now pays store bosses between $50,000 and $80,000. The $100,000 manager plan is meant to evaluate recruitment and retention, Ferril Onyett, senior director of training and human resources, said in an email Friday. The company hasn’t decided how many outlets will participate, she said.

Shares in Yum! have doubled in the past five years and now trade at about $102. Greg Creed, a company veteran who was chief executive officer for a half-decade before retiring Dec. 31, took home $38 million in 2018, the most recent year for which figures are disclosed.

Nonetheless, Pedro Favela, 30, a Taco Bell manager in San Francisco, worried that the experiment might upset the balance between pay and employment.

“There would probably be layoffs,” he said, explaining he didn’t think the restaurants could afford to pay more. Taco Bell offers phantasmagoric variations on Mexican food that appeal to a crowd that’s young, sometimes less than sober and occasionally digging for change. “We have items on the menu for $1,” Favela said.

But the risk may bring the reward of jobs that turn into careers. Indeed, the question of social mobility has been the driving force in the politics of 2020. Democratic presidential candidates have argued that the fruits of the record economic expansion, now in its 11th year, have flowed mainly to the wealthy. Unemployment is at 3.5%, according to figures released Friday, yet wage gains are tepid. Average hourly wage growth is running at a year-over-year pace of 2.9%, the slowest since mid-2018.

The average American brought home $51,960 in 2018, according to the Bureau of Labor Statistics, but food preparation and serving jobs are among the lowest paid, with a median wage of $21,350. That’s about half of what carpenters, truckers and vocational nurses earn and about $4,000 less than taxi drivers and chauffeurs.

But demand for cooks is expected to far outpace general job growth, mostly because of population and income growth that will result in more takeout, delivery and eating out, the bureau says. The situation is particularly dire for restaurants that need cooks. In Renton and Auburn, Washington, IHOP restaurants are paying $18 an hour for those with experience. Yard House is offering as much as $20 an hour for a location opening in February in Burlington, Massachusetts.

Panda Express, which built the largest Chinese-restaurant empire in the U.S. over the past three decades, increased average hourly wages 17% since 2017. The closely held company run by Peggy and Andrew Cherng, is offering some employees sweeteners like stock options and a 401(k) contribution match, as well as financial assistance for continuing education.

“It’s hard across the board to get people, but definitely a little more difficult to get cooks,” said Wesley Janssen of Dickie Brennan, which owns five sit-down restaurants in New Orleans, along with a catering division. The company, which employs 600, recently decreased weekly hours required from 37 to 32 for staff to earn benefits including money toward buying a home. It also recently raised starting pay for its cooks to roughly $12 an hour -- equivalent to only about $25,000 a year.

“The wage rates have gone up but it’s been pretty low paid,” said Bob Goldin, partner at food-service consultant Pentallect. “You’re cutting, slicing, dicing, working over a hot stove, getting there early. Being a cook is really hard.”

Being a restaurant manager is no treat, either. Jethron Ravilla runs one of the many joint Taco Bell-KFC franchises in San Francisco that are owned by Harman Management Corp.

On Thursday, there was a line nearly out the door of about a dozen people waiting to order. With no one else equipped to run the register, Ravilla slowly whittled down the backlog of customers, including a man with his pants around his knees sipping from a small bottle of liquor. Ravilla took everyone’s order with enthusiasm and patience, all while making sure the three employees in the back were preparing the orders correctly and telling someone at the back of the line, yes they do accept government benefit cards.

And the labor shortage brings managers still another duty. At Favela’s Taco Bell in San Francisco, he had to excuse himself from a reporter to address a man who had been sitting at another table:

“Sorry to keep you waiting. You’re here to interview for a job, right?”

To contact the reporters on this story: Leslie Patton in Chicago at lpatton5@bloomberg.net;Sophie Alexander in New York at salexander82@bloomberg.net

To contact the editors responsible for this story: Sally Bakewell at sbakewell1@bloomberg.net, Stephen Merelman, Peter Eichenbaum