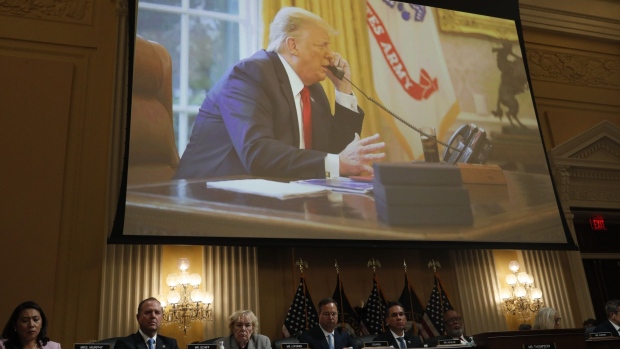 A hearing of the Select Committee to Investigate the January 6th Attack on the US Capitol. Photographer: Tom Brenner/Bloomberg , Bloomberg

(Bloomberg) -- A House committee investigating the assault on the US Capitol promised revelations in the televised hearings that began last month.

It has so far delivered.

From then-President Donald Trump demanding to join the mob attacking the Capitol to even his daughter doubting his claims of election fraud, the revelations have become must-see television. Viewership topped 20 million during the prime-time debut and 10 million in subsequent sessions.

Hearings on are hold while Congress is in recess but future sessions are expected to focus on the role of the extremist groups that participated in the attack and what Trump was doing for the 187 minutes before calling for the mob to go home.

Here is a look at the most notable revelations in the six sessions that have been held:

A slew of testimony shows that even after top-level administration and campaign aides had accepted and directly told Trump that he’d lost the election, he persisted with public claims it had been stolen or rigged.

Former Attorney General William Barr said in a videotaped deposition aired at the hearings that the FBI had looked into all the allegations and told the president they were “bull----.”

But drop-the-mic level testimony came from Richard Donoghue, a former No. 2 official in the Justice Department on Trump’s response after he and other senior DOJ officials told him there was nothing they could do because there was no evidence of widespread election fraud.

Donoghue testified that Trump essentially responded, “That’s not what I’m asking you to do. What I’m just asking you to do is just say it was corrupt and leave the rest to me and the Republican congressmen.”

Hutchinson said she heard that Representative Marjorie Taylor Greene had also asked for a pardon from the White House counsel’s office. Brooks has acknowledged he had done so, and others denied it.

Hutchinson’s testimony also revealed that long-time Trump adviser Rudy Giuliani and Chief of Staff Mark Meadows expressed interest after the Capitol attack in preemptive pardons for themselves, though they both denied that.

None of the people received pardons.

Trump wanted to go to the Capitol

Trump wanted to lead his supporters to the Capitol as the attack was underway, over the objections of then-White House Counsel Pat Cipollone, Hutchinson testified.

She said Cipollone told her “We’re going to get charged with every crime imaginable if we make that movement happen.’”

As the president’s SUV pulled away from the rally on the ellipse that day, Trump demanded it drive to the Capitol but the Secret Service refused out of safety concerns. Hutchinson said she was told by a senior aide that Trump even lunged at the steering wheel, though the agent has told people he doesn’t remember saying that.

Whether Cipollone feared Trump’s appearance at the Capitol grounds with his supporters would be evidence of his first-hand involvement in efforts to block congressional certification of Biden’s election, or would simply incite violence, is unclear.

“It affected my perspective. I respect Attorney General Barr so I accepted what he said,” the adviser, and daughter, of Trump’s said.

Rioters who stormed the Capitol at one point were just 40 feet away from then-Vice President Mike Pence as viewers saw in an animated recreation.

The committee also revealed that a confidential informant had told the FBI that members of the far-right group Proud Boys “would have killed Mike Pence if given the chance.”

Trump’s campaign raised at least $250 million from supporters claiming the money was to be used by an “election defense fund” in a battle to prove the election was stolen via voter fraud. But committee member Zoe Lofgren of California said that “big lie was also a big rip-off.”

Instead, the committee provided a video presentation and research that it said showed money was diverted to Trump’s Save America PAC and some money was given to pro-Trump organizations and entities.

Cheney revealed at the last hearing two examples on slides of what she said was proof that witnesses are being intimidated by people connected to the former administration. She said panel witnesses, as a matter of routine, are asked if anyone had attempted to influence their testimony.

Without referencing any names, she presented answers from two witnesses about unnamed people who contacted them. One recalled being told, “He wants me to let you know that he’s thinking about you. He knows you’re loyal, and you’re going to do the right thing when you go in for your deposition.” The intermediary did not identify the “he” by name.