Jerome Powell takes center stage for commodities this week, with the Federal Reserve chief set to unleash another large rate hike that could pile more pressure on energy, metals and crops.

Markets were in jittery form Monday ahead of the Fed’s big mid-week reveal: crude reversed earlier declines in the day to edge higher, gold is again pushing toward a two-year low and most industrial metals slid. The fear is that stronger anti-inflation medicine from the US and other central banks will not just squeeze demand or even trigger recessions but add to a dollar surge that’s battering commodities.

“A chunky rate hike is now largely priced into markets, but we think it could still keep a lid on prices” during this week, analysts at Capital Economics wrote in a note.

There’s a lot to watch elsewhere too. Europe’s leaders are hatching plans to fight the energy crisis, with Germany mulling nationalizations. The US will offer the latest insight on meat demand, and there’s a clutch of key conferences: on copper in Barcelona, gold in Denver and climate in New York and Pittsburgh. With geopolitical tensions running high, the UN’s General Assembly might also be a focus.

Pre-Fed tensions are most obvious in the bullion market. The looming rate decision -- together with the bank’s language around inflation and future hikes -- will drive the next moves for the precious metal after a month of steady declines in the face of a supercharged greenback. The Fed is expected to raise rates by at least 75 basis points, and a bigger increase could unleash even more volatility across currency markets. 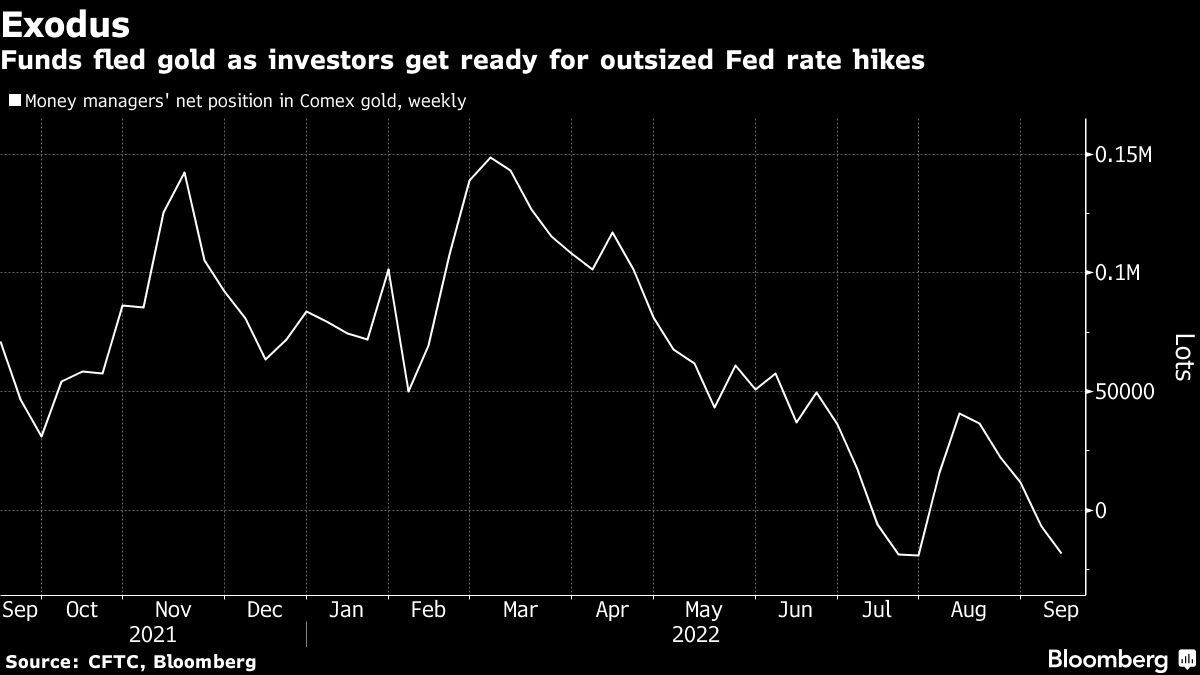 Funds are already fleeing gold and prices dipped last Friday to their lowest since 2020. Hedge funds and money managers have turned net bearish on the precious metal. Some traders reckon there’s worse to come for gold until Fed language on inflation moderates, although others point to residual support for prices from heightened geopolitical and economic risks. The commitment of bullion’s remaining longs is set to be tested.

The coming week will be another historic one for Europe’s energy sector. Germany’s seizure of the local unit of a Russian oil major kicks off a likely flurry of moves aimed at reshaping the energy markets for a new era without Russian supplies. The outcome of talks for Berlin to take over three major gas companies may be known soon, as politicians across Europe hurry to prepare for a winter supply crunch.

The Czech Republic, which holds the EU’s rotating presidency, has called an urgent meeting of energy ministers for Sept. 30, with the goal of clinching a bloc-wide crisis plan before the winter heating season starts. That means the final shape of proposals could take shape in the coming week: on market interventions, demand management or help to consumers.

There’s potential for more movement in a push by the world’s biggest miner BHP Group to snap up smaller rival OZ Minerals after a failed attempt earlier this year. The target company reckons about AUS$10 billion (US$6.7 billion) should be a starting point for talks, people familiar with the matter said.

BHP could make a new takeover offer as soon as this month, Bloomberg News reported separately. Any increased bid will underscore bullishness among big miners on copper’s long-term prospects as usage in renewable energy expands. The metal has held up reasonably well over recent months despite all the turbulence in the global economy.

Meat companies have been complaining that high prices have been hitting demand, prompting consumers to slow purchases of beef and chicken and trade down to less-expensive options. Thursday’s monthly US Cold Storage report from the US Department of Agriculture will provide some clues on how that’s playing out. Supplies of beef, pork and chicken have been climbing in freezers so far this year with meat production outpacing demand. 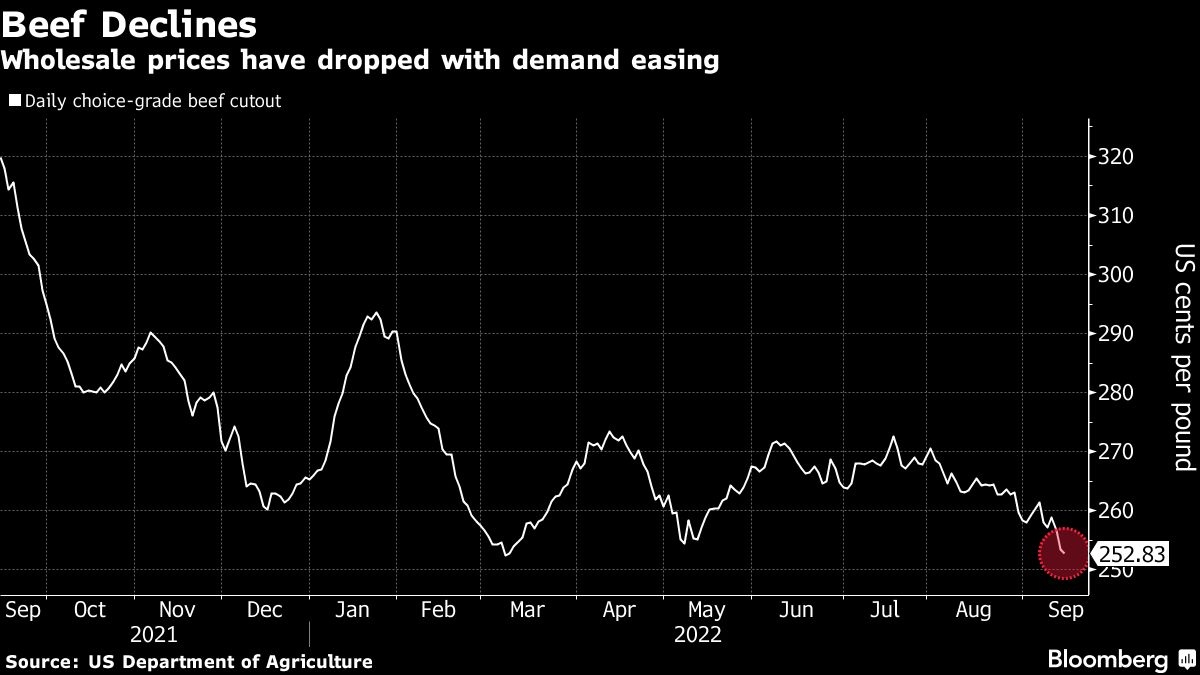 Meanwhile, drought in the US was prompting cattle ranchers to move animals off pastures and sell to feedlots, where they are bulked up for slaughter. Traders will look to the USDA’s monthly Cattle on Feed data on Sept. 23 to see if the livestock drive is showing signs of slowing after accelerating more than anticipated in last month’s report. Cattle on pasture act as something of a strategic beef reserve, so larger amounts moving into the feedlot sector point to tighter supplies down the line.

Gold mining executives, investors, bankers and analysts are converging at the yearly Denver Gold Forum in Colorado Springs, Colorado, starting this weekend. The 34th annual gathering of the world’s oldest and largest event of the precious metals sector arrives at an intriguing time for the industry -- and not just because of the crucial Fed decision that should come as the forum wraps up its final day.

Who might be the next takeover target may also be discussed at Denver Gold. There have been US$13.5 billion in gold deals announced this year, with the largest being Gold Fields Ltd.’s US$7 billion all-stock offer for Yamana Gold Inc. announced in May.