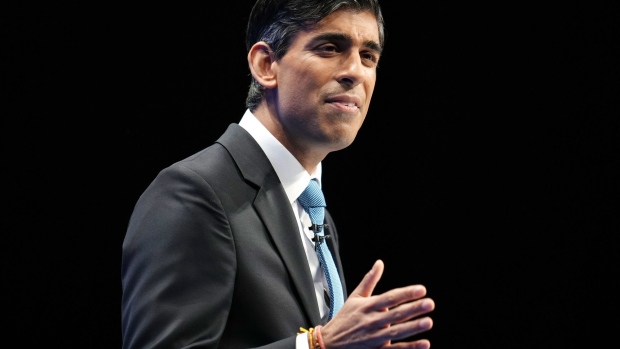 MANCHESTER, ENGLAND - OCTOBER 04: Chancellor of the Exchequer Rishi Sunak delivers his speech on day two of the Conservative Party Conference at Manchester Central Convention Complex on October 4, 2021 in Manchester, England. This year's Conservative Party Conference returns as a hybrid of in-person and online events after last year it was changed to a virtual event due to the Coronavirus pandemic. Boris Johnson addresses the party as its leader for the third time. (Photo by Christopher Furlong/Getty Images) , Photographer: Christopher Furlong/Getty Images Europe

Rishi Sunak will deliver his third budget as U.K. Chancellor of the Exchequer on Wednesday -- and his first that isn’t dominated by the government’s response to the coronavirus pandemic.

The Treasury has already pre-announced more than a dozen measures, including an inflation-busting rise in the minimum wage, an end to the public sector pay-freeze and about 31 billion pounds ($43 billion) of spending on health care, skills, transport and border security. Here are some other things to look out for:

Sunak is expected roll back a levy on bank profits as he looks to shield the finance industry from a corporation tax rise. The reduction, which may amount to several percentage points, wouldn’t take effect until 2023.

Businesses have long called for an overhaul of business rates, which they say put bricks-and-mortar shops in town centers at a disadvantage to online retailers and out-of-town depots because of their link to property values. The opposition Labour Party has said it would scrap them, and the Treasury has been reviewing them. Sunak said the results of that review will be published on Wednesday, but the signs are that any changes will be much smaller than business wants. Sunak says Labour hasn’t explained how it would replace the 25 billion pounds of revenue that would be lost if business rates are scrapped.

Labour and some prominent rank-and-file Conservative Members of Parliament have called on Sunak to scrap or suspend the 5% value-added tax charged on energy bills, as a surge in prices puts pressure on household budgets. An added benefit for the government would be that it could sell the measure as one that it couldn’t have done when the U.K. was part of the European Union. Given the focus on living costs, the government could also consider additional measures to help the poorest Britons through the winter.

Sunak drew criticism from across the political spectrum earlier this month for ending a 20-pound-a-week uplift to universal credit benefit payments that he’d brought in to help the unemployed and low earners during the pandemic. Speculation now centers on whether he’ll lower the “taper rate” at which claimants lose benefits per extra pound they earn. Even so, the Joseph Rowntree Foundation, estimates cutting the taper rate to 60 pence from 63 pence would benefit just 1.7 million families out of the 5.5 million that lost out when the uplift was canceled.

More than 100 Conservative MPs have written to Sunak calling for a freeze in most alcohol duties, and a cut to the charge on draft beer. The Treasury last year began a review into the patchwork of duties, which date back to 1643, aiming to simplify what it called an “arguably outdated” system of taxation that raises more than 12 billion pounds a year.

The government has kept this duty frozen for a decade, and letting it rise would be a strong signal ahead of the COP26 summit that it is serious about tackling climate change. Still, with petrol prices already close to a record, and concerns about the cost of living mounting, it seems likely Sunak will keep the freeze.

Sunak last year cut the foreign aid budget to 0.5% of economic output from 0.7% -- a 4 billion-pound reduction that broke a manifesto promise, sparked a backlash among backbench Conservatives and drew condemnation from every living former prime minister. Sunak said at the time he would restore the funding when the economic situation allowed. With the U.K. economy rebounding faster than expected, there’s a chance he might use the budget and spending review to chart a return to the 0.7% rate.

The Tories suspended their fiscal rules during the pandemic, and Sunak said in March he intended to set out new ones later in the year. The chancellor has signaled he wants to stop borrowing to fund day-to-day spending by the middle of the decade, and his new targets may enforce that commitment.

Sunak’s deputy, Chief Secretary to the Treasury Simon Clarke, hinted on Tuesday that there may be more funding to push the government’s flagship promise to equalize opportunities across the country. Asked in the House of Commons by the northern Conservative MP Jake Berry for a “huge announcement” on the 4.8 billion-pound fund set up to invest in regional infrastructure, Clarke said leveling up would be “one of the absolute golden threads of the budget and spending review tomorrow.” Berry would have to wait “just a few more hours to get hopefully some very welcome news,” he said.