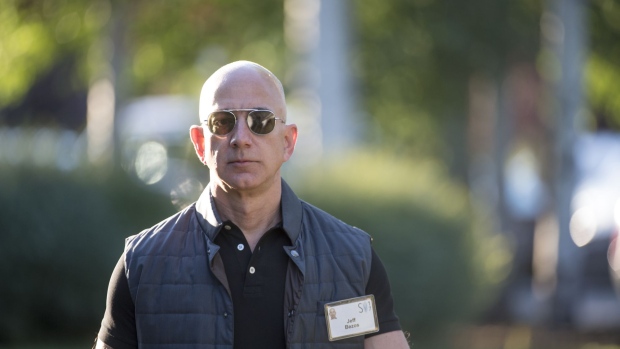 The chief executive officers of Amazon.com Inc., Apple Inc., Alphabet Inc. and Facebook Inc. are set to appear for their first collective questioning by lawmakers during a House hearing to be livestreamed on Wednesday.

The Judiciary Committee’s antitrust panel, armed with more than a million internal documents, has been investigating for more than a year whether the tech giants are squashing competition. The subcommittee, led by Rhode Island Democrat David Cicilline, is preparing a report about whether stronger antitrust laws are needed.

Jeff Bezos, Tim Cook, Sundar Pichai and Mark Zuckerberg, all of whose companies are under investigation by federal, and in some cases state, enforcers, will testify from remote locations, likely far from Washington. The four CEOs, whose companies have faced harsh criticism from President Donald Trump, will face tough questions from lawmakers in both parties about whether their companies have become too powerful.

“We’re going to be watching the hearing today very closely, because there is no question that what the big tech companies are doing is very bad,” Trump said Wednesday.

Democrats are expected to focus on whether the platforms thwart competition, while Republicans are concerned about whether they squelch conservative viewpoints.

All four CEOs argued in prepared remarks released late Tuesday that they personify American values around entrepreneurship, that their companies face intense competition and that they’re always innovating to build better products for consumers.

Even as they come under the panel’s microscope, a five-minute limit per lawmaker and Congress’s prior stumbles on technical topics could work to the CEOs’ advantage.

Follow the hearing, which is scheduled to start at 12 p.m. ET, on Bloomberg’s TOPLive Blog, BTV and homepage. Here’s how the proceedings could play out:

How the world’s richest man -- the only one of the four CEOs who has never testified before Congress -- holds up under questioning.

Whether the company develops products by using data from third-party merchants who use Amazon’s platform. Media reports said employees have done that, while Amazon insists they went rogue. A company lawyer’s previous denial led Cicilline, who will chair the hearing, to demand that Bezos appear.

Bezos, 56, touted the success of the independent merchants on its site in his prepared remarks. Small- and medium-sized sellers averaged more than US$160,000 in sales in the year ended May 31, up from about US$100,000, the company said in a recent report. The CEO is also likely to say Amazon represents only a small percentage of retail sales globally, including offline, and that its aggressive competition lowers consumer prices.

The Federal Trade Commission and California are looking into Amazon’s role as both an umpire (owner of the platform used by outside merchants) and a player (seller of products that compete with those merchants) in e-commerce.

Amazon’s labor record, particularly its treatment of warehouse workers amid the pandemic, and its low federal tax payments.

Whether Cook, 59, can continue to avoid the level of scrutiny that the three other CEOs face.

The App Store, where tech startups’ dreams of making it big collide with Apple’s strict payment system rules and its competing offerings.

Cook said in his prepared remarks that Apple products don’t command a dominant market share. He compared its App Store to highly curated offerings by a high-end department store and said that in more than a decade the company never raised the commission or added a single fee.

Apple recently outlined its claim that the 30 per cent fee it charges developers who sell services through its App Store has become standard industry practice.

The Justice Department is investigating the App Store rules, while state attorneys general are conducting a separate consumer-protection inquiry.

Apple’s commitment to end-to-end encryption has led to clashes with the Justice Department in high-profile investigations that sought data on iPhones. Apple also has faced criticism for some of its concessions to China.

Whether Pichai’s testimony signals anything about the Justice Department’s impending antitrust lawsuit against Google.

Competitors offering shopping comparisons, local reviews and travel services have long alleged that Google muscled them out using its dominance of online search. Google’s control over the technology used by advertisers and websites to buy and sell ad space has also been a frequent complaint of news organizations, which say Google is taking an unfair share of ad revenue.

Pichai cited a long list of digital rivals, including Amazon, EBay, Walmart and others, in his prepared remarks. Google has also argued that regulators should establish a broad definition of the advertising market, including television. Pichai, 48, may also note that Google’s offerings are free and that the FTC closed a probe in 2013.

The Justice Department is weeks away from filing a monopolization case, Bloomberg has reported. Although the precise focus isn’t clear, the department and a coalition including most state attorneys general are focusing on the digital ad market. Separately, some states are looking into the company’s Android mobile operating system.

The way the company collects data, the spread of disinformation on YouTube and the company’s courting of China could all be fodder for questions.

How much he faces new questions about antitrust versus older questions on privacy, election misinformation and racist content. Zuckerberg, a favorite bipartisan punching bag, has been told during previous hearings that he hasn’t earned the trust of Americans to handle their finances, that his “user agreement sucks” and that, yes, he’s a monopolist.

Whether his acquisitions of companies, such as Instagram, were designed to eliminate potential rivals and whether he used Facebook’s market dominance to strong-arm those he hasn’t been able to absorb, such as Vine.

Expect Zuckerberg, 36, to say that Facebook fights for user attention against many companies, including Snap Inc. and ByteDance Ltd.’s TikTok, which is under review by a U.S. national security panel. He’ll likely note that it’s invested in the success of companies it acquired and that it helped keep the world connected amid the pandemic. His prepared testimony also suggests that U.S. antitrust fervor could harm American innovation and open the door for Chinese companies. “China is building its own version of the internet focused on very different ideas, and they are exporting their vision to other countries,” according to his written testimony.

In addition to antitrust investigations by the Justice Department and the FTC, a multi-state probe is looking into whether Facebook harmed competition and endangered user data.

Democrats could ask whether his refusal to fact-check political ads is less in support of free speech and more a business decision to court Republicans and Trump, as well as to profit from discrimination and disinformation. Republicans have signaled they’ll go after the company’s alleged silencing of conservatives.