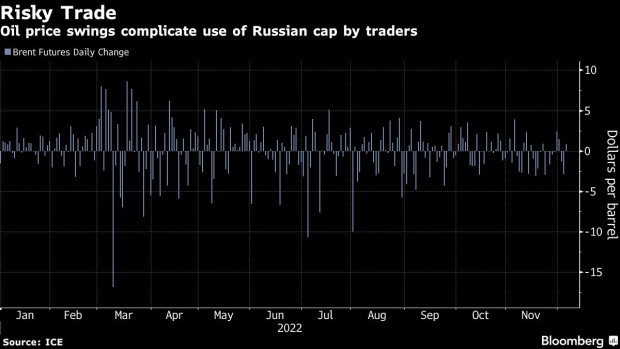 (Bloomberg) -- On Monday, Group of Seven nations imposed a cap on the price of Russian oil. The measure’s debut has been glitchy.

The unprecedented move by one set of countries to try to impose a price at which another can sell a commodity has drawn confusion among traders, and — from Moscow — a threat of retaliation.

It requires anyone wanting to access key G-7 services including insurance to pay $60 a barrel or lower a barrel for Russian crude. That’s well above where the nation’s main grade currently trades, but far below global benchmark oil prices.

As the cap enters its third day, here are the highlights that have emerged since it began.

Russia is still considering its options, but one idea is to respond with a price floor. There are two main approaches to do that: one would be a fixed price, the other a maximum discount to international benchmarks, according to people familiar with the matter.

Moscow is taking its time over its response. A floor that’s above the cap would in theory put traders and shipping companies in a bind. In such a scenario, anyone buying from Russia would have to do so without accessing industry standard insurance or European ships.

It would be a big step for Russia to take unless it’s certain it can get the oil tankers, insurance and other financial services necessary to get all its barrels to buyers.

The lower headline oil prices go, the more the US can try to claim vindication.

The US argued during the bloc’s negotiations that oil prices cannot be allowed to peak, which is what it says might have happened in a scenario if harsher, previously planned EU sanctions had been imposed. That’s because oil supplies might drop if the cap kicks in and drive up costs for everyone.

The new design is supposed to let Russian oil flow but at an unattractive price for Moscow.

Brent futures slumped below $80 a barrel for the first time since January on Tuesday — a level well below when Russia invaded Ukraine. They sank further on Wednesday.

Urals, Russia’s main grade, stood at $45.10 a barrel at the Baltic Sea port of Primorsk on Tuesday, while ESPO from Asia was at $71.79, according to data provided by Argus Media. Urals is having to sell at discounts to cover high freight costs and still compete with other crudes that are more local to Asia.

There are more reasons than Russian oil flows for prices to be falling, but it’s nevertheless true that the cap appears to have eased concerns about a loss of supply.

There’s a problem in terms of how the cap works and how Russian oil trading works in practice. Typically, if a trader buys Russian oil today, the value of that cargo will only become known in the future.

The trouble traders have with that — in terms of applying the cap — is that they may have to pay a price that exceeds the threshold. In that scenario, they would become ineligible for G-7 services. That’s left some of them wary of buying Russian barrels.

The normal way for Turkish maritime authorities to know if a tanker is insured is to check on the website of its insurer. It’s a straightforward process — if it’s there, it’s covered by a member of the International Group of P&I Clubs, an association of shipping insurers.

A website listing no longer offers that assurance. Yes, the ship might be generically insured, but how can Turkish authorities be certain that the listing proves the cargo was purchased under the cap?

As such, it’s asking for letters from tankers exiting the Black Sea with oil on board to prove they’re insured.

That would set an unpleasant precedent for the International Group, which organizes the cover of 95% of the global tanker fleet. And it’s one that it has so far proved unwilling to take. What if Egypt asks for the same for the Suez Canal? What about Singapore?

Curiously, it’s oil from Kazakhstan — not Russia — that’s really been hit so far by the bureaucratic hurdle. That’s because it’s a bigger stream to start with and relatively few cargoes from Russia have so far tried to sail through Turkey’s Bosphorus shipping strait, and the few that have were able to prove they had insurance from a Russian company.

Watch out for other companies following the lead of Shell Plc. Europe’s largest oil company has started avoiding booking tankers that previously moved Russian cargoes. If a ship’s last cargo is Russian, then the owners need to ensure that there are no dregs from that consignment, or risk having the charter terminated.

If other companies follow suit, it would become harder for vessel owners to flit between servicing Russia and non-Russian markets. That could bring volatility to tanker markets — Russian and non-Russian alike.

--With assistance from Serene Cheong and Sharon Choi.