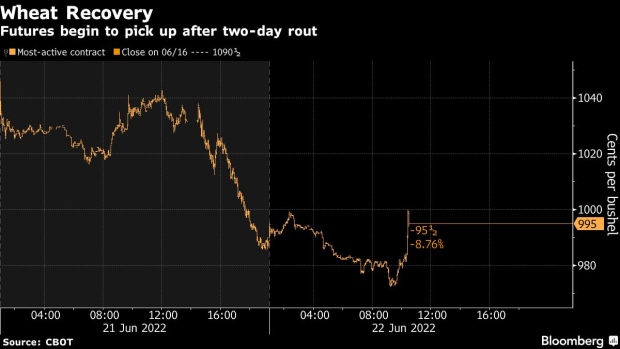 (Bloomberg) -- Wheat futures recovered from their recent rout after a Ukraine port was attacked and uncertainty looms over the next round of Black Sea grain export talks.

Russian forces fired at least seven missiles on the southern Ukraine port of Mykolayiv on Wednesday, regional governor Vitaliy Kim said on Telegram. The port is normally a major hub for Ukrainian agriculture shipments. Wheat prices in Chicago rose as much as 3.2%, before paring gains.

While the prospect of more talks has weighed on grain prices, “the difficulties of reaching an agreement remain high,” Paris-based adviser Agritel said in a note. Heightened risks for large cargo vessels transiting Russian ports amid the war also might restrain exports of its upcoming bumper crop, according to UkrAgroConsult.

Markets are also monitoring the status of harvest progress across the Northern Hemisphere. US farmers are collecting winter wheat at a faster-than-usual clip, while drought both there and in the European Union has curtailed overall production.

Algeria purchased wheat in a tender this week, and Tunisia is seeking the grain on Wednesday.

Meanwhile, corn traded steady and oilseed futures plunged, with soybeans dropping below $15 a bushel for the first time since the start of February. A selloff in palm oil -- which erased its year-to-date gain on Wednesday -- has weighed on prices across the complex, and soybean oil is set for its longest rout since 2017.