Food inflation will not be transitory and it could extend into 2024: Trader

Benchmark wheat in Chicago climbed above US$8 a bushel for the first time in almost nine years as importers boost purchases amid adverse weather conditions and soaring fertilizer prices that risk denting next year’s harvests.

The advance may ramp up already high food costs worldwide. Futures tied to other types of wheat also surged amid increasing demand and dwindling reserves due to inclement weather.

Some farmers are now contending with dry soil at planting time, as well as a run up in fertilizer prices. Wheat is on its longest streak of monthly gains since 2007.

“Speculators keep talking about inflation and are buying commodities for an inflation trade,” Jack Scoville, vice president for Price Futures Group in Chicago, said in a note. 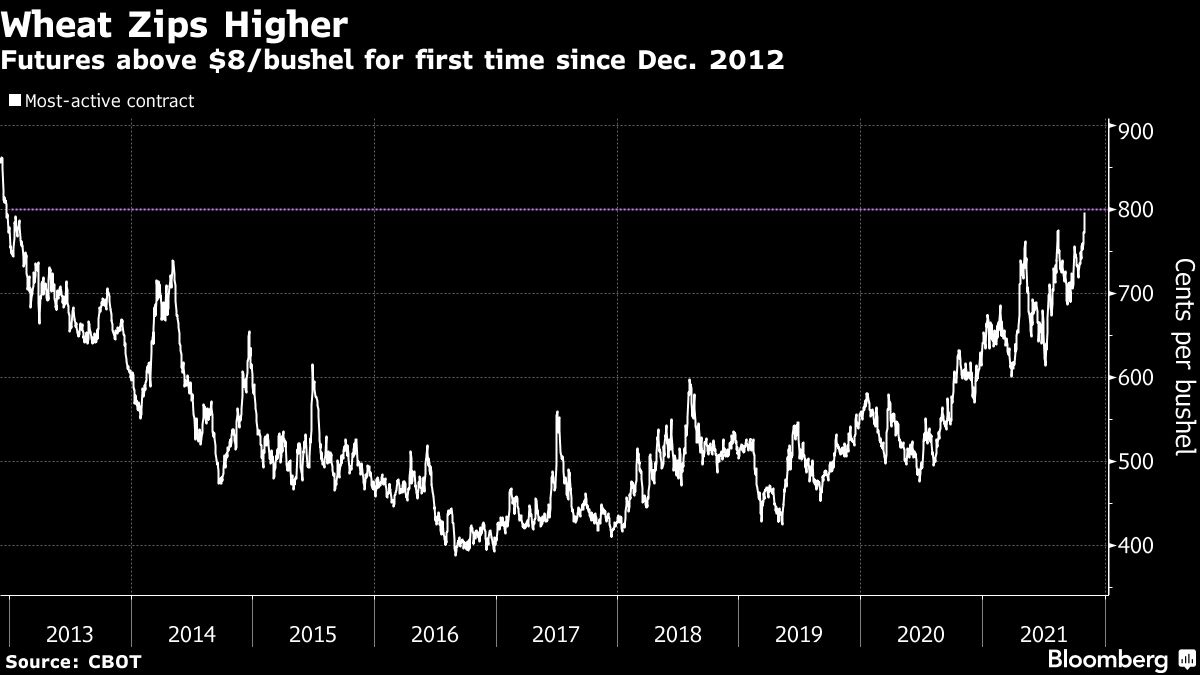 Paris milling wheat futures at one point pushed close to an all-time high and Minneapolis spring wheat touched the priciest level since April 2008. Hard red winter wheat traded in Chicago rose 2.6 per cent to close at US$8.065 a bushel, the highest settlement since May 2014.

Saudi Arabia’s state buyer booked 1.3 million tons of wheat in a tender this past weekend, almost double the amount expected. Plus, top importer Egypt bought 180,000 tons of Russian wheat less than a week after its largest purchase of the season.

The USDA also reported corn and soybean harvests that were slower than forecast. Separately, the agency said the amount of corn used for ethanol in September was 1.3 per cent higher than the same period a year earlier.

Corn rose for a fifth straight session on Monday, closing 2 per cent higher at US$5.79 in Chicago for the highest settlement since July 2.

Soybeans settled little changed at US$12.485. The U.S. is expecting its biggest soy crop on record this year. As fertilizer prices soar worldwide, the prospect for big soybean plantings next year is likely as some farmers switch out of more chemical-intensive corn.