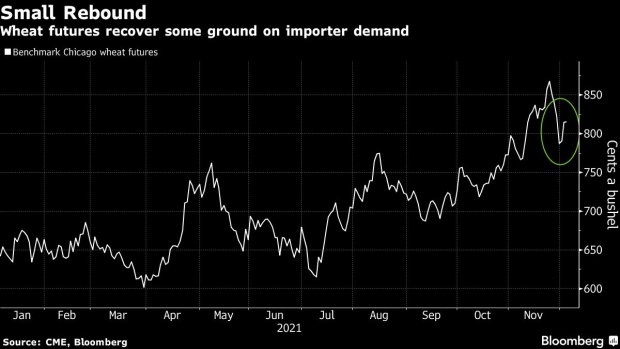 A truck delivers grain to a silo feeder at a Riordan Grains storage facility in Balliang, Victoria, Australia, on Tuesday, Nov, 9, 2021. For the second season in a row, the stars are favorably aligned for Australian wheat growers -- a bumper harvest, a shortage of one of the world's most important foods and global prices near nine-year highs. Photographer: Carla Gottgens/Bloomberg , Bloomberg

(Bloomberg) -- Wheat futures held onto a jump of more than 3% overnight, which was the biggest in three weeks, as more rains headed for already sodden harvest areas in eastern Australia, and importers snapped up supplies.

Severe floods affecting parts of eastern Australia show no signs of relenting, with another bout of heavy rain on course to hit growing regions this weekend, wreaking further damage on the harvest. Jordan and Tunisia bought wheat at tenders, and Saudi Arabia is seeking more than half a million tons.

The harvest losses in terms of quality and volume in eastern Australia worsen the global shortage of bread-making wheat after severe droughts and heatwaves slashed production in Canada and parts of the U.S. this year. The market will be looking toward the monthly report from the U.S. Department of Agriculture on Thursday for the latest update on the outlook for wheat supplies.

Elsewhere, corn and soybeans in Chicago were up for a third day as concerns over the new omicron variant of Covid-19 eased. Still, the weather in top soybean grower Brazil has been nearly ideal and the country is heading for the world’s largest crop of the oilseed ever. On the demand side, there has been little evidence of significant corn purchases by China, the largest importer.

In Chinese markets, refined palm oil futures in Dalian were up 4%, and headed for the biggest gain in almost two months. Veteran industry analyst Dorab Mistry said this week that benchmark futures in Malaysia could surge more than 15% to a fresh record by the end of February on supply tightness. The Kuala Lumpur market is closed for a holiday.