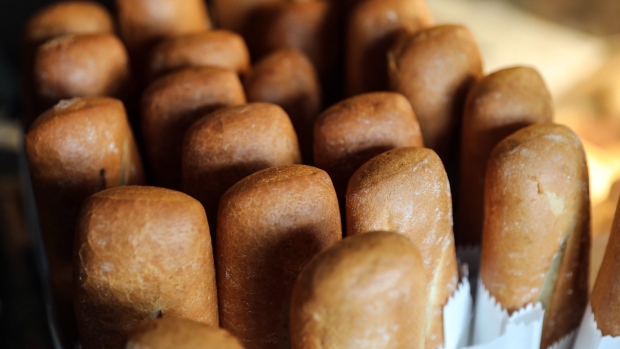 White bread baguettes on display at a bakery in Beirut, Lebanon, on Thursday, March 31, 2022. Already gummed up by supply-chain bottlenecks, skyrocketing freight rates and weather events, markets are bracing for more upheavals as deliveries from Ukraine and Russia — which together account for about a quarter of the world’s grains trade — turn increasingly complicated and raise the specter of food shortages. Photographer: Hasan Shaaban/Bloomberg , Bloomberg

(Bloomberg) -- Bakers in Burkina Faso closed in protest on Thursday after the government said it would not let them raise the price of baguettes in response to surging wheat prices.

In an effort to “save our bakeries” after authorities forcibly shuttered shops that raised prices, all establishments would close, the Federation des Patrones de Boulangeries, Patisseries et Confiseries du Burkina Faso said in a statement. Wheat prices in the land-locked West African country have soared in recent weeks to 525,000 CFA francs ($858) per ton from 350,000 CFA francs, it said, as supplies of the raw material have been disrupted by Russia’s war with Ukraine, a major exporter.

In April, the labor union warned that it would have to raise the price of French-style baguettes that are a staple in the francophone country to 200 francs from 150 francs. On May 23, it said the new price would come into effect on May 24, leading the industrial development ministry to suggest the increase was illegal, sparking the strike, news website Lefaso.net reported.

Non-union bakeries that stayed open on Thursday quickly ran out of bread, Radio Omega reported. The government on Thursday announced talks with bakery owners, transporters and customs officials to find a solution to the spike in prices of basic food stuffs.