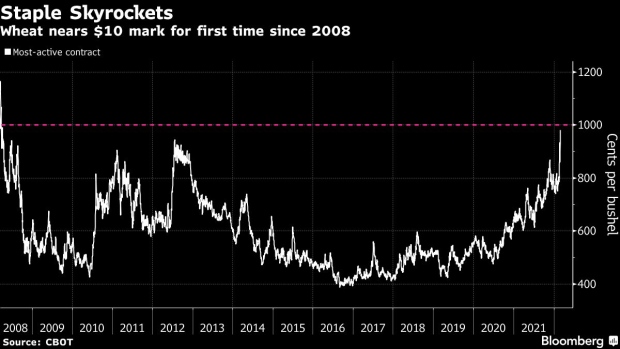 Spring wheat grows in a field before harvest near Brunkild, Manitoba, Canada, on Tuesday, Aug. 11, 2020. Wheat production in Canada, excluding durum, may reach 31.9 million metric tons, up 16% from a year earlier and the biggest harvest ever, according to results of a crop tour of Manitoba, Saskatchewan and Alberta organized by Winnipeg, Manitoba-based FarmLink. , Bloomberg

(Bloomberg) -- Wheat futures rallied by the exchange maximum for a second day, extending a blistering surge for one of the world’s staples, as Russia’s invasion of Ukraine strands shipments from the Black Sea breadbasket.

Ukrainian ports have been shuttered by the war, vessels have been struck by shelling and new grain deals from Russia are also on pause. Some banks are limiting commodity-trade finance linked to the two countries, with governments also ramping up sanctions against Russia.

That’s barring some of the most dominant suppliers from global grain markets, sending buyers flocking elsewhere. Plus, the war appears likely to upend planting for spring crops like corn, prolonging the impact on supplies. UkrAgroConsult in Kyiv said the conflict has “paralyzed” the country’s agricultural chain from cultivation to shipping.

Benchmark soft red winter-wheat futures in Chicago leaped by the 50-cent limit to $9.84 a bushel, the highest since 2008 and 27% above the start of the year. Hard red wheat breached the $10 per bushel mark, and milling wheat in Paris neared an all-time high.

Corn futures have also rallied at a staggering pace, up 21% this year to the highest since May. Ukraine is among the world’s biggest exporters, with China and the European Union relying on its grain.

Palm and soybean oils both reached records. Ukraine and Russia account for the bulk of global sunflower oil trade, one of their key alternatives.