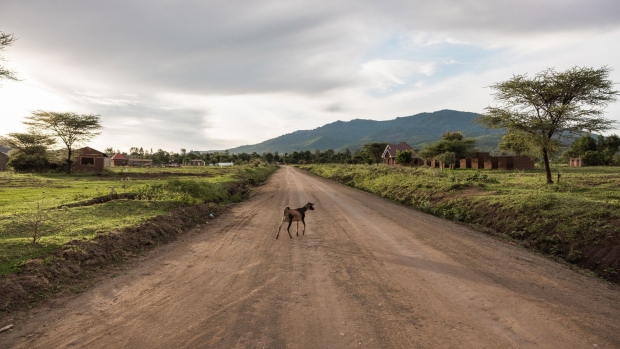 A goat walks across a dirt road in Gedamar village, Babati, Tanzania, on Friday, Feb. 18, 2022. Since solar pay-as-you-go, or paygo, was introduced almost a decade ago, it has been hailed as the answer to the elusive challenge of bringing electricity to hundreds of millions of people currently off the grid in Africa, Asia, and Latin America. , Bloomberg

(Bloomberg) -- Russia’s war with Ukraine and the resultant spike in grain and fuel prices have dealt a severe blow to African nations that were already reeling from the fallout of the coronavirus pandemic. Widespread drought is now adding to the woes of the world’s poorest continent, raising the risk of hunger and social unrest, and governments have little scope to respond.

Here are some of the issues that are keeping key officials awake at night and how they plan to tackle them:

Zambia became the first African nation to default on its foreign debt during the pandemic. The government’s top priorities are to restructure its loans, attract more foreign investment with a view to creating more jobs for an army of unemployed youths, and bolster electricity production, agricultural output and tourism, Musokotwane said in an interview.

Talks with creditors about reworking the debt are due to get under way soon, and the government anticipates them agreeing to a combination of loan write-downs and term and interest-rate revisions. The government is meanwhile creating policy certainty for mining companies and enticing them to boost production by agreeing to their long-standing plea to make royalties deductible from income taxes, according to the minister.

“In agriculture, one of the new things we are doing now is to take advantage of the fact that Zambia has a lot more land resources” available than other countries, meaning there is the physical space to attract large-scale investment that creates jobs and generates taxes and business opportunities, he said.

Zimbabwe’s government is intent on stabilizing the struggling economy by exercising fiscal prudence, increasing revenue and enhancing productivity, according to Chiduwa. Fiscal and monetary policy will be better coordinated, which will create a better operating environment for businesses, and steps have already been taken to curtail the money supply, inflation and a depreciation in the exchange rate, he said.

The authorities also want to ensure that the agricultural industry is more resilient to climate change and other exogenous shocks, such as the pandemic and the Ukraine invasion.

“We have seen disruption to global supply chains and this has made us take a closer look at our own production chains,” Chiduwa said. “We are looking and working toward self-sufficiency in wheat, corn and sunflower production. Our agriculture must not be 100% dependent on being rain-fed. That’s why government is pursuing infrastructure projects, in particular dam construction.”

While Tanzania’s economy had begun rebounding from the pandemic, it is now contending with rising inflation stemming from Russia’s war on Ukraine. The government is now looking at bolstering local food production and introducing measures to shield the most vulnerable from extreme poverty, according to Nchemba.

It also intends making it easier to do business and access finance, attracting more foreign direct investment, putting in place the necessary infrastructure to promote industrialization and improving the nation’s skills base.

“Tanzania is endowed with vast natural resources” including fertile land, marine resources, natural gas and minerals, Nchemba said. “We need to attract investment” to take full advantage of that potential, he said.