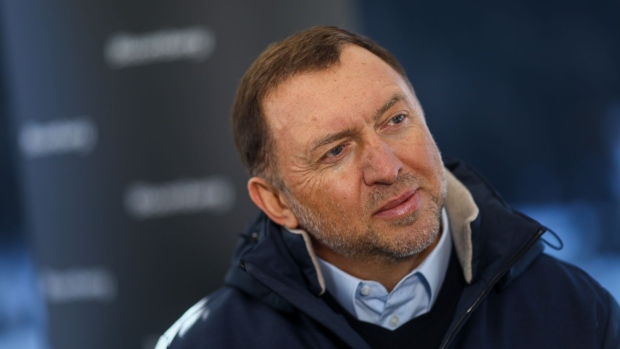 (Bloomberg) -- A £500,000 ($604,000) cap on what sanctioned Russian oligarchs can pay their UK lawyers is already being tested in London, after attorneys expected to represent billionaire Oleg Deripaska warned it wasn’t enough.

Deripaska was ordered to prepare for a trial in March that could see him handed a jail term or fined for allegations of contempt of court. It’s part of a long-running and bitter dispute between the billionaire and Vladimir Chernukhin, whose wife is one of the largest donors to the UK’s Conservative Party. Chernukhin says that Deripaska broke undertakings relating to his shares in EN+ Group International PJSC that Chernukhin alleges were put “beyond the reach of the court.”

The UK has sanctioned more than 1,200 individuals and entities since Russia’s invasion of Ukraine, imposing an asset freeze on their finances. But in the face of a mounting backlog of requests from sanctioned tycoons, the government agency in October brought in a general license allowing them to pay their legal fees, which is capped at £500,000.

Sanctioned Russians have been struggling to move forward in their commercial cases while London’s lawyers who choose to represent them grapple with the reputational risks of defending Kremlin-linked elites.

In a letter to the court, lawyers at Peters & Peters, who are set to represent Deripaska, estimated that the legal work was likely to cost more than the cap. They said Deripaska has a separate request into the UK’s Office of Financial Sanctions Implementation, which would enable a higher sum.

Deripaska’s representative Ruben Bunyatyan said the case should never have been allowed to move forward.

“But since the court decided to proceed with the case -- incidentally, it did so long before the senseless war started and the absurd sanctions ensued -- it would only be right if Mr. Deripaska is allowed to defend himself with no restrictions,” Bunyatyan said in an emailed statement.

The sum is a “handsome war chest” for a three-day trial, said Richard Lissack, a lawyer for Chernukhin. “The size of the pot is more than sufficient.”

“This is a matter that does need finality,” Judge Robin Knowles said during the March hearing. Deripaska would potentially even need to represent himself if he couldn’t get his lawyers in place, the judge said.