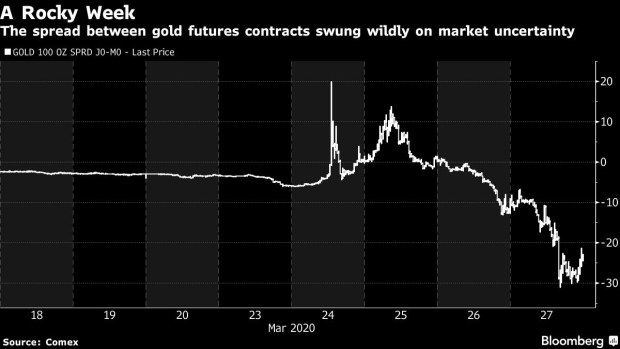 One-kilogram gold bars are arranged for a photograph at a Tanaka Holdings Co. store in Tokyo, Japan, on Thursday, Feb. 21, 2019. Gold had a bullish start in 2019, rallying to a 10-month high in February amid worries about the U.S.-China trade war and bets the U.S. Federal Reserve may not raise interest rates this year. However, the momentum has fizzled as risks from the trade dispute abate. Photographer: Akio Kon/Bloomberg , Bloomberg

(Bloomberg) -- There are few corners of the global financial market that have been upended as spectacularly, or as oddly, by the coronavirus pandemic as gold trading.

Not only are prices swinging in an erratic fashion -- surging one moment and crashing the next -- that is undermining the metal’s vaunted status as a haven in times of crisis, but unprecedented logistical disruptions have also kicked off a frantic hunt for actual bars of gold.

At the center of it all are a small band of traders who for years had cashed in on what had always been a sure-fire bet: shorting gold in the futures market. Usually, they’d ride the trade out till the end of the contract when they’d have a couple of options to get out without marking much, if any, loss.

But the virus, and the global economic collapse that it’s sparking, have created such extreme price distortions that those easy-exit options disappeared on them. Which means that they suddenly faced the threat of having to deliver actual gold bars to the buyers of the contract upon maturity.

It’s at this point that things get really bad for the short-sellers.

To make good on maturing contracts, they’d have to move actual gold from various locations. But with the virus shutting down air travel across the globe, procuring a flight to transport the metal became nearly impossible.

If they somehow managed to get a flight, there was another major problem. Futures contracts in New York are based on 100-ounce bullion bars. The gold that’s rushed in from abroad is almost always a different size.

The short-seller needs to pay a refiner to re-melt the gold and re-pour it into the required bar shape in order for it to be delivered to the contract buyer. But once again, the virus intervenes: Several refiners, including three of the world’s biggest in Switzerland, have shut down operations.

Signs of distress picked up on Friday, March 20, when the cost to swap New York futures and spot physical gold in London -- the world’s biggest market -- rose to about $2. Typically, this trade cost almost nothing. After the close of the next session on Monday, that premium had jumped further to $6.75.

When traders in Asia entered Tuesday morning, there weren’t many sellers or offers, and suddenly they were scrambling to buy whatever gold they could get their hands on. By the time London came in, most of the market was squeezed and nobody wanted to sell.

“I realized it was going to be an extremely volatile day,” Tai Wong, the head of metals derivatives trading at BMO Capital Markets in New York, said of Tuesday. “We watched this panic develop literally over the course of 12 hours. Having seen enough market dislocations, you recognize that the frenzy wasn’t likely to last, but at the same time you also don’t know how long it would extend.”

By the time the panic finally subsided Tuesday night, major investors and decades-old veterans were reeling. At the peak of the carnage, potential total losses were estimated at as much as $1 billion, according to market participants. That’s even though the people involved in the trade represented less than 4% of total open interest -- or the amount of outstanding contracts.

Traders in need of physical metal went as far as to cold-call holders of gold bars in hopes that they’re in possession of exchange-approved metal. Some investors paid massive fees to have the remaining operating refineries to mint new gold bars, according to people with knowledge of the matter.

The spread between April and June futures contracts on Tuesday jumped to $20 an ounce, meaning it cost that much more to buy metal for April than it did for two months later. That signaled more near-term demand for bullion and the need to soon have physical supply in hand.

By the end of the week, though, the situation had flipped. The June contract cost almost $30 more than the April contract, suggesting that traders appetite for physical gold has subsided for now.