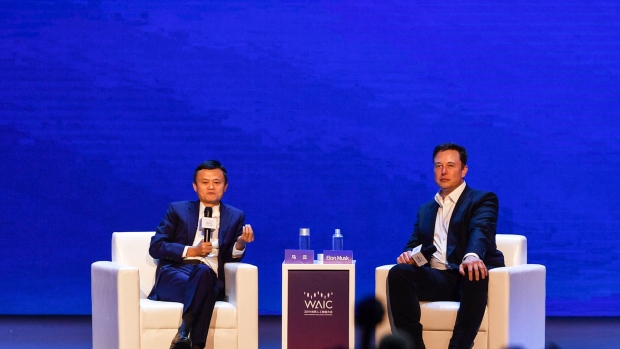 Tesla Inc. (TSLA:UN) Chief Executive Officer Elon Musk and Alibaba Group Holding Ltd. Chairman Jack Ma, two of the leading luminaries in the technology world, sparred against each other on Thursday on subjects ranging from the dangers of artificial intelligence, the need to explore Mars and the future of education.

Held at the World Artificial Intelligence Conference in Shanghai, the rare debate between China’s richest man and one of America’s more controversial billionaires began with thoughts on AI -- Ma is betting humans will prevail over machines, while Musk fears doomsday is coming -- but the conversation, which went viral on social media, soon transgressed into areas such as Mars exploration and aliens.

Below are some of the more memorable exchanges, which have been edited lightly for clarity.

Musk: People underestimate the capability of AI. They sort of think like it’s a smart human. (But it’s going to be) much smarter than the smartest human you will ever know.

Ma: I never in my life say human beings will be controlled by machines, it’s impossible...Human beings can never create another thing that is smarter than human beings.

Musk: I very much disagree with that. The biggest mistake I see people making is to assume they’re smart.

Ma: My view is that computers might be more clever, human beings are much smarter.

Musk: I don’t know man, that’s like famous last words...If you go back 40 years ago, 50 years ago maybe, you had Pong -- that was just two rectangles and a square. Now you’ve got 40 realistic real time simulations with millions people playing simultaneously. If you assume any rate of improvement at all, I mean these games will be indistinguishable from reality. You will not be able to tell the difference. Either that or civilization will end.

Musk: (AI is) going to get to a point where it just completely simulates a person, like many people simultaneously, in fact obviously there’s a strong argument that we’re in a simulation right now.

"I really think China is the future"

Ma: The best resource on earth is not the clothes, not the oil, not the electricity -- it’s the human brain.

Musk: I agree with the birth rate problem that you alluded to earlier. Most people believe that we have too many people on the planet. This is an outdated view. Assuming AI is fine, assuming there’s a benevolent AI, the biggest problem the world will face in 20 years is a population collapse.

Ma: I absolutely agree with that, the population will be facing a huge challenge.

Musk: The common rebuttal is immigration. Yeah like from where?

Ma: Yeah, you want to immigrate to Mars.

Ma: People worry about jobs, but I worry about education. The way we teach our kids are mainly designed for the industrial period..How can we make human beings smarter and wiser? I think we need to change the way of education...How can we teach our kids to be more creative and constructive? This is the key...Computers only have chips, men have hearts. It’s the heart where the wisdom comes from. For the next 10, 20 years, every human being, country, government should focus on reforming the education system, making sure our kids can find jobs, a job that only requires three days a week, four hours a day...If we don’t change the education system we are in, we will all be in trouble.

Musk: Close the loop on being less wrong about the future. I’d say that’s the right way to think about education. I mean down the road with a Neuralink, you can just upload any subject instantly. So it would be like the Matrix. You want to fly a helicopter? No problem...if you wanted to do whatever, any given skill, you would just upload it instantly. The way education works right now it’s extremely low bandwidth. It’s extremely slow. Lectures are the worst.

Ma: I admire that you want to go on to Mars. I am more interested in Earth.

Musk: The thing about Mars is that I think it’s important for us to take the set of actions that are most likely to continue consciousness into the future...I think we should not take for granted that consciousness will continue because we have not encountered any aliens. Where are the aliens? This is the Fermi paradox. This is one of the most important questions. How come we’ve not found any aliens? There are people out there who think we have found aliens. Trust me, we have not. I would know...One of those actions is to become a multi-planet species or ensure that life is multi-planetary. There is a probability at a certain point that some either external force or some internal unforced error causes civilization to be destroyed or sufficiently impaired such that it can no longer extend it to another planet.

Ma: It’s great to send people to Mars but we have to care about 7.4 billion people on Earth. We need heroes like you. But we need more heroes like us working hard on Earth improving things every day.

Musk: I’m very pro-Earth. (But an effort to go beyond) seems like a wise investment for the future.