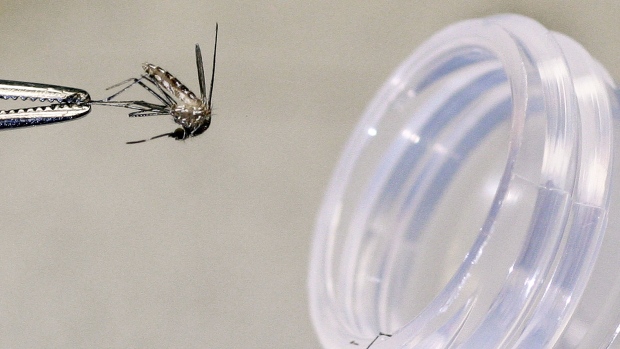 One down, millions to go. , Photographer: Jeff Topping/Getty Images

(Bloomberg Opinion) -- New and scary diseases have always made good headlines, but if they are very rare, is it ever justified to tell people to be afraid? Exaggerators in public health fields or in the media may not think they can do any harm by issuing alarming warnings about things like mosquito-borne illnesses, vaping or eating meat. But there can be costs to such tunnel vision.

It’s OK to make a big deal about something that’s small when there’s a reasonable chance it might become a lot bigger, said risk communication consultant Peter Sandman. Think of the H5N1 bird flu scare of the last decade, he said. The disease was much more likely to kill those who got infected than was the 1918 pandemic flu, which killed about 50 million people. The new bird flu hadn’t evolved the ability to spread from person to person, but in the very real possibility it did, it could have been the worst pandemic ever.

That never happened, but it was still good public health procedure to warn people, said Sandman, because it genuinely looked like it was the tip of an iceberg. The same goes for SARS, a viral disease that broke out in 2003 and was contained before it could become the global pandemic some feared.

Today the big scare in some U.S. states is eastern equine encephalitis (EEE). It’s exceedingly rare, but can be deadly. There are usually about seven cases a year in the U.S., but this year there have been 28 cases and nine deaths.

The important question is whether this is just a bump, or whether there’s reason to think something has changed that has made this disease more easily spread. That question remains unanswered, though the answer is critical in deciding how to talk about the threat.

Stoking fear can lead to responses that are, at best, a misallocation of resources. In 2016, the mosquito-borne disease that had people scared was Zika virus, and this was used, said Sandman, to justify spraying in New York, though there were never any cases attributed to local mosquitoes there.

By far the biggest scare story of 2019 has been the small rash of acute lung illnesses associated with vaping. The media reported that cases were “surging” when they reached a possible 450 incidents with five deaths. The numbers have now edged over 1,000, with at least 18 deaths, but there’s no mechanism by which this will likely explode into a pandemic. And it’s not a big number compared to the number of people who have been vaping without incident. Although the exact cause has yet to be pinned down, which is worrisome, from the start the evidence has pointed to THC (the active ingredient in marijuana), flavoring or other additives as the primary risk.

There are lots of reasons for people to worry about the exploding popularity of vaping among young people. It’s highly addictive, and the long-term effects remain unknown. But for older people who are already addicted to nicotine, is this disease enough of a threat to warn smokers against switching to vaping? Is it better for someone who has switched to vaping to go back to cigarettes?

More than 480,000 people die every year from smoking in the U.S., many from lung cancer. There is good reason to think vaping won’t cause cancer because users don’t inhale the carcinogenic tar that comes from the combustion of tobacco. Which opens up the possibility that scaring people over this rare new disease could have the unintended consequence of increasing the incidence of something much more common — and known to be deadly.

Similar unintended consequences have come from scaring people away from certain foods, like meat and dairy. Last week, a new paper in published in the Annals of Internal Medicine reported that the available evidence points to no statistically significant risk from eating red meat.

Some nutrition researchers objected, but the scientific evidence never pointed to more than a small risk associated with eating meat. A few years ago researchers claimed to find a link between cancer and processed meats, such as ham, sausage and bacon. People who ate a lot of these had an elevated risk of colon cancer, but the risk was small — a 5.3% lifetime risk for those who ate consumer processed meat every day, as opposed to a 4.5% risk for the general population.

The links between disease and heavy consumption of unprocessed meat — steaks and hamburger and such — are even weaker and smaller, which is to say that occasional indulgence is probably not particularly dangerous.

There are environmental reasons not to eat meat — the raising of livestock does increase greenhouse gas emissions. And there may be ethical problems, especially in light of a new scientific understanding that cows, sheep and pigs have feelings and complex social lives.

But people have to eat something. When we were told that eggs and meat would kill us, many substituted cereal, pancakes, bagels, pasta and syrupy nonfat yogurt. Such high-carbohydrate foods have since been associated with obesity and type 2 diabetes. Scaring people can have its own dangers.