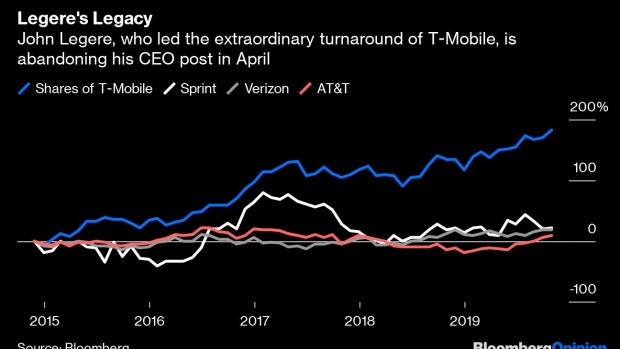 (Bloomberg Opinion) -- I’m not sure which is the bigger question: What is T-Mobile US Inc. without John Legere? Or, who is John Legere without T-Mobile?

“I own no other clothing,” Legere joked during a conference call Monday morning, after the wireless carrier announced that its magenta-festooned CEO will be stepping down soon. Legere’s last day will be April 30, capping a remarkably successful seven-year run during which he took T-Mobile from a distant last place among the top U.S. carriers and turned it into the fastest-growing member of the industry. He will be replaced by Mike Sievert, who is being elevated from chief operating officer, a title he’s held since early 2015.

Make no mistake, the CEO transition will usher in a new T-Mobile. That’s not because the visions of the two men are so different — they aren’t, and Legere has been grooming Sievert, 50, for quite some time. But T-Mobile is no longer the industry upstart, and Legere’s departure suggests that he feels his work there is almost done. The last step is to complete the acquisition of Sprint Corp., which is being held up by a group of state attorneys general rightly concerned about the potential harm the transaction may cause consumers.

Legere, 61, made clear that he isn’t retiring — nor is he turning his “Slow Cooker Sunday” Facebook Live series into a full-time gig. While he said the rumors of him joining WeWork aren’t true, he has fielded a “tremendous amount” of interest from companies seeking the expertise he’s demonstrated at turning around a troubled business and generating broad enthusiasm for a brand. “I’ve got 30 or 40 years and five or six good acts left in me,” Legere, the class clown of corporate events, said on Monday’s call.

When Legere joined T-Mobile in 2012, the brand was in disrepair and customers were fleeing. It looked as if the wireless carrier might never be able to catch up to Verizon Communications Inc., AT&T Inc. or Sprint. But Legere transformed T-Mobile into a self-marketing powerhouse, with he and the rest of the management team shamelessly adopting new looks as walking billboards for the company. And it worked. More important, investments in the network and novel moves to simplify customer bills altered T-Mobile’s perception from one of a budget operator of last resort to a company that’s driving industry innovation. That’s earned it customer loyalty, as evidenced by having the lowest rate of churn — or customer defections — among its peers. T-Mobile’s stock has also left the others in the dust:

Over the years, Legere’s style has not only included a closet’s worth of Superman-esque T-shirts adorned with a giant letter T, but also sports coats, sneakers, a leather jacket, a chef’s hat, a sports jersey and anything that could be made hot pink or fit the company’s logo. He has 6.5 million Twitter followers — almost as many as Kris Jenner, the matriarch of the Kardashian family — and is known to respond directly to them, even occasionally dropping into calls to the customer service line. It was all part of his effort to shake up an industry that was going the way of cable-TV, with subscribers irritated by steep, overly complex monthly bills.

“We saw an opportunity to disrupt a stupid, broken, arrogant industry,” a typically off-the-cuff Legere said on Monday’s call. “And T-Mobile is far from done,” he added. Though that may be for better or worse.

Should the Sprint deal survive or avert the trial that’s set to begin Dec. 9, T-Mobile will gain newfound pricing power. Legere and Sievert have promised that the combined company won’t exploit this, saying that the combination instead allows them to “supercharge” what’s known as T-Mobile’s Un-carrier strategy. But the logic doesn’t quite follow. There’s little reason to believe a merger that facilitates higher prices and better profit margins wouldn’t result in exactly that, and the goodwill Legere has built up with regulators and consumers isn’t insurance enough against this scenario. Fierce competition between T-Mobile and Sprint the last few years is what benefited consumers and forced the industry to do things like offer unlimited data plans. If Sprint gets swallowed, the marketplace will be narrowed to just Verizon, AT&T and T-Mobile.(1)

Sievert is a fine choice as CEO. But the reality is that the company he’s inheriting is different from the one Legere joined, and the days of T-Mobile’s incredible rapid growth will fade into the past, and there will be a natural shift to take advantage of its enhanced market power. So when Sievert said on Monday’s call that after the Sprint deal closes, “customers are going to the be winners,” I wouldn’t count on it.

(1) Regulators have mandated that T-Mobile unload some assets to Dish Network Corp., helping set up the satellite-TV provider as a new entrant to the wireless market. But Dish is years and multiple billions of dollars away from becoming a formidable rival that can fill the hole Sprint will leave behind. It’s a weak concession that Legere was more than happy to accept.