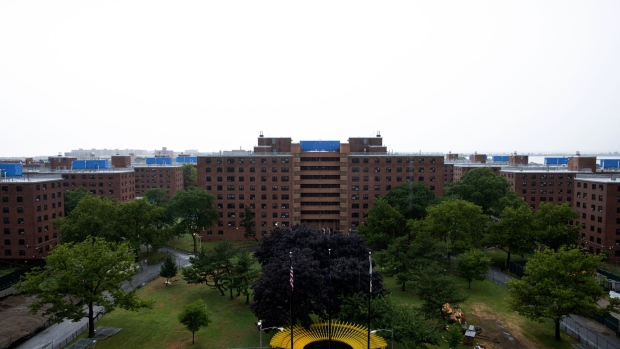 (Bloomberg) -- When private managers take over New York City’s public-housing developments, they promise low-income residents that they’ll fix up their apartments and buildings. But a new study shows that the switch can leave tenants more vulnerable to building neglect and evictions, often with public funds footing much of the bill. New York City Housing Authority housing “has gone from being of equal or better quality than comparable private sector housing to being plagued by severe issues such as mold, peeling lead paint, and failing heat,” according to a report by Human Rights Watch published on Thursday. The study found that for every $1 of publicly held or subsidized funding, just 29 cents of private, unsubsidized financing was raised, a finding that differed from a 2018 Department of Housing and Urban Development report that estimated a private to public funds ratio of 19-to-1.

Nationally, public housing is already at a crisis point. There are approximately 950,000 public housing apartments nationwide, or about a third lower than the peak of 1.4 million in 1994, according to the report.

NYCHA, which pushed back against some of the report’s findings, is the largest public housing system in North America. In 2016, the city began a program to convert and upgrade some of its public-housing developments in partnership with private and non-profit funds, with maintenance provided by private managers. A little more than 35,000 units will have gone through the conversions by 2024, according to data from NYCHA. That would be just over halfway to the target of 62,000 conversions announced in 2018 by former Mayor Bill de Blasio.

More than $1.8 billion in capital repair work has been completed across the city through the program, known as Permanent Affordability Commitment Together, or PACT.

For example, a a year after the Ocean Bay development in Bayside, Queens, was converted in 2016, the eviction rate was 1.4%, compared to the citywide NYCHA housing eviction rate of 0.3%. Eviction rates remained above 1% through 2019. A Covid-related eviction moratorium went into place in 2020.

These evictions may put low-income residents at greater risk of experiencing homelessness. The median household income for NYCHA residents is $18,473 — just 30% of the median income for residents citywide, which stands at $61,297.

The Human Rights Watch study also details examples of deteriorating facilities at the city’s public housing complexes, both immediately prior to and after conversion, along with improperly managed construction and maintenance. Residents interviewed for the study reported trash and human waste in communal areas, broken elevators, and construction crews that did not adequately protect inhabited living spaces as they worked.

“Conditions at NYCHA developments are the consequence of long-term federal disinvestment, and we will continue to use PACT and other innovative strategies to raise capital, make improvements and protect tenant rights and protections,” Brancaccio said. “NYCHA is committed to continuously improving PACT by including residents in decisions, and working with PACT partners to prevent displacement, improve engagement and strengthen oversight.”