Tesla Inc.’s plunge has cost its shareholders about US$300 billion in 2021 but the toll it is taking on speculative sentiment throughout the market has been much greater.

Elon Musk’s electric carmaker is down more than 30 per cent since its January high, brutalizing anything associated with it -- most notably Cathie Wood’s flagship exchange-traded fund, the Ark Innovation ETF (ticker ARKK). In fact, every one of the 54 U.S.-based ETFs that have assets under management exceeding US$1 billion and more than 1 per cent invested in Tesla fell during Friday trading.

While Tesla is the most prominent example of the turnaround in high-flying stocks, large funds holding comparable amounts of quarantine favorites such as Zoom Video Communications Inc. and Square Inc. have also been hit. All but one of the 12 funds with sizable stakes in the video conferencing company fell in early trading Friday, while only two of the 12 with the payment processor were up on the day.

The shock rippling through markets from a single stock’s plunge is a testament to how quickly things can go haywire when risk takers crowd into the same once soaring names.

“Any fund that holds a large weight in a single stock, if there is selling of that fund, it will pressure the stock, and vice versa -- especially on down days when bids tend to disappear,” said Mohit Bajaj, director of ETFs for WallachBeth Capital. “We are seeing heavy pressure in some of these names that had such a huge run last year.”

Hard-hit funds included the Invesco Wilderhill Clean Energy ETF, First Trust NASDAQ Clean Edge Green Energy Index Fund, Ark Next Generation Internet ETF and the Ark Innovation ETF. Each of those four funds was down more than 6 per cent as of noon in New York. 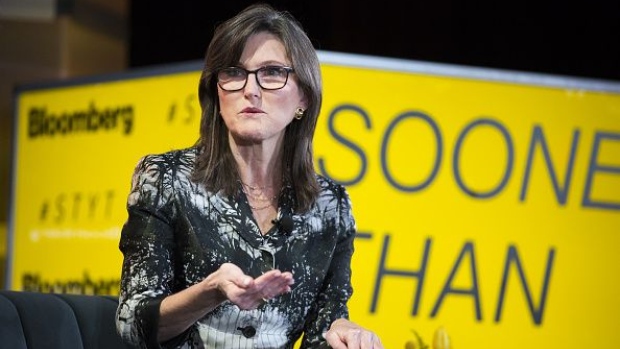 “High-flying stocks are great to own when there’s still wind beneath them,” said James Pillow, managing director at Moors & Cabot Inc. “But when that breadth thrust is withdrawn because of liquidity, they often fall much faster than they rose. Holding such high fliers is a significant risk to concentrated portfolios, and frankly it’s a risk for the confidence in the entire stock market.”

Arthur Hogan, chief market strategist at National Securities Corp., said that “Tesla is the poster child for betting on a dream.”

“When you start looking at things and saying, ‘This is going to be the greatest fill-in-the-blank ever,’ and then running up its valuation,” he added, “you have to understand, there are no one-way trades. Trees don’t grow to the sky. So when something goes parabolic, it tends to come back down to Earth at some juncture.”