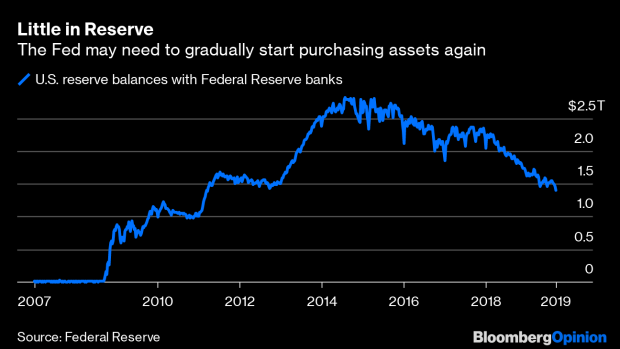 With that four-word title, JPMorgan Chase & Co.’s chief U.S. economist, Michael Feroli, effectively summed up Wall Street’s reaction to the weeklong stress in funding markets and Federal Reserve Chair Jerome Powell’s comments about how he and other policy makers would deal with it. At his press conference last week after the central bank’s rate decision, Powell said it’s “certainly possible that we’ll need to resume the organic growth of the balance sheet earlier than we thought.” Among the most likely solutions to rein in short-term rates that briefly spiraled out of control is some sort of permanent open-market operations.

Naturally, hearing “growth of the balance sheet” sounds to some like a return to quantitative easing — the post-crisis measure of purchasing Treasuries or other securities to inject liquidity into the financial system. The phrase “QE-infinity” is often tossed around as a swipe against meddling by central banks and their permanent role in propping up financial markets. Fed critics seized on Powell’s words as confirmation that such infinite QE is around the corner.

Strategists at Wall Street’s biggest banks sought to head off that sort of framing almost immediately.

The key difference in “organic growth” of the Fed’s balance sheet versus QE-style expansion, they say, is that the former comes about because of increased demand for the central bank’s liabilities — mainly, those Federal Reserve Notes in your wallets. Feroli estimates that demand for U.S. currency has been growing by $100 billion a year recently. The Fed will most likely move to offset this heightened demand by adding assets, he said, but that’s hardly QE. After all, the central bank did precisely the same thing for most years between 1914 and 2007.

Bank of America Corp. strategists predict the Fed will be even more aggressive. “It is important to make the distinction: this is not a return to quantitative easing,” they said in prefacing their estimates. They say the central bank will need to purchase about $150 billion of assets a year because of the demand for its liabilities. On top of that, “to avoid a repeat of recent funding pressures and a return to an ‘abundant’ reserve level plus a buffer, we think the Fed most likely will need to purchase an additional $250 billion.”

This is not some Wall Street ploy to play down the significance of the Fed resuming balance-sheet growth. The Fed is clear on its website about how it needs to engage in open-market operations to counter the growth in its liabilities:

That’s exactly what happened last week, when the effective fed funds rate rose to 2.3%, higher than the stated 2.25% upper bound. The Fed’s go-to preventive measure, as it always has been, is precisely the sort of asset purchases that Powell was describing.

Former New York Fed President Bill Dudley, writing for Bloomberg Opinion, said the Fed could focus on adding short-term obligations like Treasury bills to make abundantly clear that its plan is different from post-crisis QE. Joseph Abate at Barclays Plc sees similar benefits to buying bills — it would serve to “avoid any confusion with QE and to emphasize that these purchases are ‘reserve management operations,’” he wrote.

At NatWest Markets, strategists went even further, differentiating between buying assets to offset currency growth and a sort of “QE-lite” program. Organic growth “seems to suggest offsetting currency growth, and not using the balance sheet to relieve stress in funding markets,” they wrote in a Sept. 20 note. “It’s possible a QE-lite style program could exist in the future, but we do not think the Fed is ready to commit to anything like that at this time. Given the recent funding pressures, we see the Fed as being content with coming in and conducting temporary repo operations.”

For now, that’s exactly what the New York Fed plans to do, committing late last week to a series of overnight and term repurchase agreements through Oct. 10. That’s some pretty serious firepower. As I wrote after the recent FOMC decision, this seemed like the most obvious stopgap measure to deal with any lingering quarter-end stress while policy makers consider their more permanent approach and how they’ll communicate the shift to markets.

Should they go with permanent open-market operations, it “will inevitably be referred to by some in the media as ‘QE,’” JPMorgan’s Feroli lamented. “This would be unfortunate.”

Aside from a general lack of nuance, though, it’s unclear what harm would be done if some investors simplistically equated routine purchases to QE. Maybe risky assets would rally more than they should. Maybe Treasury yields and gold prices would jump higher on expectations of accelerating inflation. Neither of those outcomes would truly be so bad. If anything, if markets misinterpret bond buying as a form of easing monetary policy, it could provide breathing room for the Fed to pause on any more interest-rate cuts, as its dot plot suggests.

Regardless, Wall Street strategists have staked out their position and appear intent to spread the word, providing a welcome assist to Powell. The Fed chair’s communication record, after all, has been spotty at best. Still, even he wouldn’t dare call any open-market operations a return to QE. Markets shouldn’t, either.