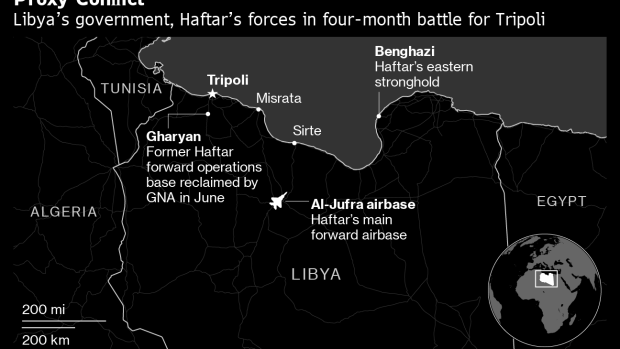 (Bloomberg) -- On July 26, Libya’s internationally-recognized government announced a brazen air raid on a hangar housing drones deployed in support of rival commander Khalifa Haftar. A day later, his forces said they retaliated with strikes on a military base that sent fireballs into the night sky.

Neither side officially acknowledged the worst-kept secret of the North African state’s civil war: as the opponents face a stalemate on the ground, their backers in Turkey and the United Arab Emirates are engaged in an aerial campaign that’s seen them target each other’s unmanned planes in a bid to determine Libya’s future in their favor.

The Tripoli government’s attack on the airfield in Jufra was carried out by Bayraktar aircraft owned and operated by Turkey, according to two Western diplomats and a Libyan official, who all spoke on condition of anonymity. The U.A.E. struck back with Chinese-made Wing Loong drones, according to the two diplomats and an Arab official, targeting Bayraktars located in the coastal city of Misrata. Airstrikes have also destroyed three Ukrainian cargo planes supplying both sides.

Regional and European powers have competed for influence in the oil-rich country for years, but Haftar’s offensive to capture the capital in April sparked an escalation in foreign intervention that has prolonged and deepened the conflict, sidelining United Nations efforts to seek a negotiated peace.

“The fact that these local actors can turn to outside factions is a disincentive for them to come to the table,” said Frederic Wehrey, senior fellow in the Middle East program at the Carnegie Endowment for International Peace. “They’ve got a stream of weapons” to tap.

The U.S. indicated tentative support for Haftar, who’s based in the eastern city of Benghazi, once his assault was underway and France has quietly supported both sides. But for the most part, Washington, with more pressing priorities elsewhere in the world, has watched as some of its most important Middle East allies battle for dominance in an OPEC state with Africa’s largest oil reserves.

Libya has been under a Security Council arms embargo since 2011, when NATO-backed rebels overthrew Muammar Qaddafi and the country became fractured by infighting, creating a security vacuum that allowed jihadists and people smugglers to flourish.

But the sanctions are among the world’s least enforced. The European Union’s Operation Sophia, originally intended to intercept human trafficking across the Mediterranean and later extended to include the weapons ban, has little chance of intercepting arms shipments.

Oded Berkowitz, an Israeli security analyst, said in an interview he’d verified through open source images the deployment in Libya of Russian-made Pantsir surface-to-air missile systems and several types of armored vehicle manufactured by Turkey and the U.A.E.

Ankara’s involvement in the war is partly fueled by commercial interests. It wants to eventually resume work on Libyan construction contracts worth about $18 billion and bolster its strategic clout in the Mediterranean amid a rush to claim offshore oil and gas fields, Turkish officials said in interviews last month.

But Turkey, ruled by President Recep Tayyip Erdogan’s Islamist-rooted AK party, also has a political agenda. It backs governments and groups across the Middle East that are anathema to Egypt and the U.A.E., both of which have set out to quash political Islam.

Three Turkish government officials as well as executives at Bayraktar, the drone-maker, refused to comment on allegations of arms shipments to Libya. However, Erdogan in June confirmed, without elaborating, that his administration was providing equipment to Prime Minister Fayez al-Sarraj’s Tripoli-based government.

The U.A.E. government didn’t respond to requests for comment. But in July, Minister of State for Foreign Affairs Anwar Gargash said his country supported an end to the hostilities and a return to a political process, Al-Arabiya reported.

In Cairo and Abu Dhabi, Haftar and his self-styled Libyan National Army are seen as reliable if irksome allies in the fight against Islamists.

The 75-year-old former Qaddafi-era general is seen as a hardheaded commander who seldom listens to advice he dislikes. Yet from his eastern stronghold he helped secure Libya’s frontier with Egypt after routing jihadists who’d overrun several cities and carried out cross-border attacks.

While Haftar controls Libya’s preeminent military force, many supporters foresaw he’d struggle to take Tripoli. Egypt, France, and the U.S. tried to dissuade him, according to diplomats with direct knowledge of events. He ordered the advance anyway while UN Secretary-General Antonio Guterres was in Libya to prepare for a national reconciliation conference.

An adviser to Haftar, who holds sway over most of Libya’s oil fields, said the general decided to go ahead with the offensive because he didn’t believe Sarraj’s Tripoli government would honor a power-sharing agreement they’d been negotiating.

Taking Tripoli would place him in a better position to control the country’s financial levers, especially the central bank and the National Oil Corp., which Haftar admits has sole jurisdiction over the export of crude, Libya’s economic lifeline.

As his forces remain bogged down at the capital’s gates, with rising casualties and little else to show for the offensive, Haftar may even find his grasp over the east weakening -- an alarming prospect for his allies, and the U.S.

Washington wants “the LNA at maximum humiliated but not destroyed, because the reality is they want some form of military actor to have a monopoly on violence or some form of control over the eastern region,” said Emad Badi, a non-resident fellow with the Middle East Institute.

Haftar’s biggest setback came in late June. He’d built a forward operations base at Gharyan, 100 kilometers (60 miles) south of Tripoli, which was thought to be impregnable. Forces loyal to Sarraj, backed by Turkey’s drones, blitzed the city in a day. The LNA responded by threatening to target the Turkish planes. It also rounded up a number of the country’s citizens living in Libya’s east, only to release them after Ankara signaled reprisals.

The LNA left behind a trove of weapons at Gharyan underlining the extent to which the war has become a regional conflict. Photographs released by the Tripoli government showed U.A.E-made Yabhon surveillance drones, Chinese guided-missiles, and American Javelin anti-tank systems abandoned by French operatives.

Sarraj’s government disputed claims by Paris that the Javelin missiles were inoperable and belonged to a French counter-terrorism team, arguing they showed France’s military support for Haftar.

The rising death toll -- the conflict has killed more than a thousand people -- and stalemate has raised pressure on Haftar. The UN negotiated a temporary truce over this month’s Muslim Eid al-Adha holidays, and a grouping of countries that includes the U.S. called for a more lasting ceasefire and talks. The U.A.E. signed on.

Egypt has also endorsed a ceasefire, but along lines more favorable to its allies in the east. Arab and Western diplomats directly involved in the talks say international backers on both sides want to end the conflict as it becomes clear no side can easily win.

“A lot of military observers, including in countries that were biased on this side or the other side, came to the conclusion that this is something that is not going to be conclusive in any way,” the UN special envoy to Libya, Ghassan Salame, said in an interview. “We wasted four months on Libyans believing they can win tomorrow, but now they are more realistic.”

--With assistance from Selcan Hacaoglu, Samuel Dodge and Zainab Fattah.

To contact the reporter on this story: Samer Khalil Al-Atrush in Cairo at skhalilalatr@bloomberg.net

To contact the editors responsible for this story: Lin Noueihed at lnoueihed@bloomberg.net, Mark Williams