Markets may have to wait to 2021 for more U.S. stimulus

The polls are saying it and the market is pricing it: President Donald Trump is going to lose the U.S. election next month and his Republican Party may even fail to keep the Senate.

But traders have been burned betting the house on one side before, such as in the last U.S. presidential election in 2016 and the Brexit referendum the same year. The risk that the consensus for a Democratic sweep of power this time doesn’t play out, or the result being contested, is leading some to take no chances with less than two weeks until the Nov. 3 vote.

James Athey, a money manager for Aberdeen Standard Investments, has loaded up on Treasuries and has a long position in the dollar and the yen versus riskier currencies such as South Africa’s rand. That’s because he expects these to benefit in the event of a surprise.

“I see a very real chance that the incumbent wins,” he said, looking at social-media sentiment indicators as well as changes in party registrations. “Both suggest more Republican support than the polls.” 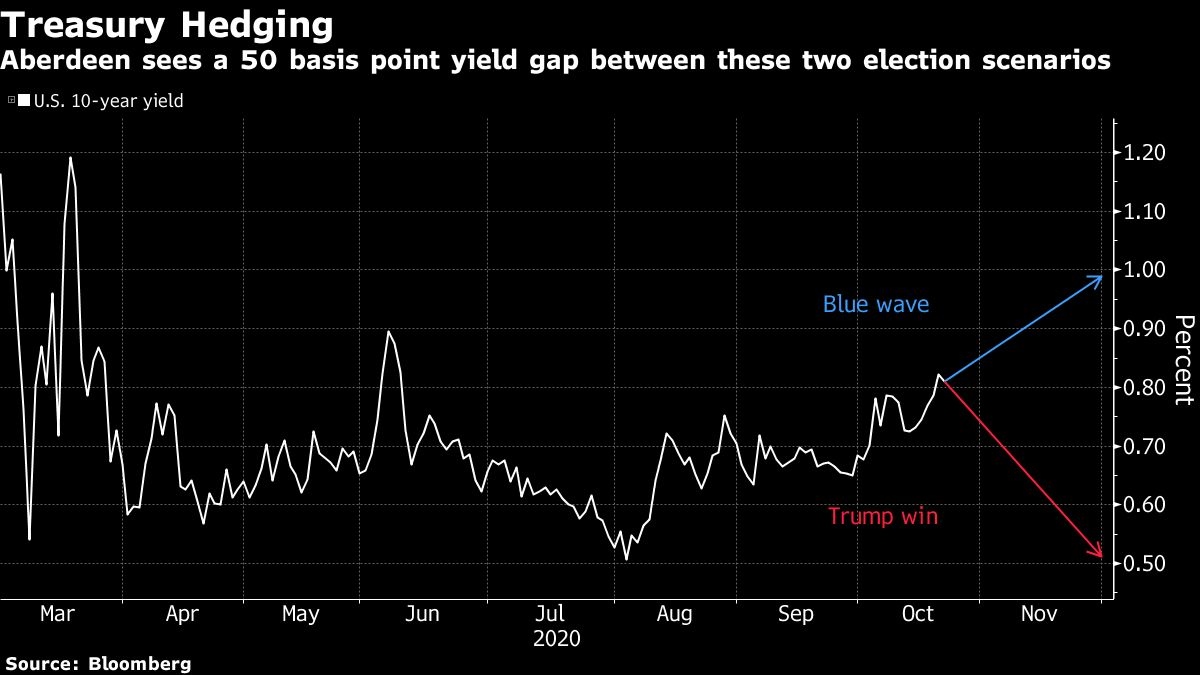 The market’s view has shifted in recent months from worries about a contested election that would spur volatility, to bets on a solid win for Democrat Joe Biden as the polls consolidate in his favor. That has pushed up Treasury yields along with U.S. stocks on the prospect that a Biden administration would usher in bigger fiscal stimulus, especially if the Democrats take the Senate.

While polls now put Trump’s chances of winning at a little over 10 per cent, Athey sees it between 35 per cent to 40 per cent, with the potential to go even higher. He reckons a Trump victory would see 10-year Treasury yields slide to 0.5 per cent, while a Democratic president and Senate would send them up to one per cent, from around 0.84 per cent currently.

However, at a minimum, the race for the Senate is unlikely to deliver an outright majority for the Democratic party, according to Athey. And he’s not the only one to worry about a close race, showing Wall Street’s position may be evolving again toward more hedging.

For JPMorgan Asset Management, the risk is a possibility that the election could be contested. In a presentation Thursday, it said most investors were keen to avoid such a scenario.

“We are preparing for the worst outcome but hoping for a much clearer-cut scenario after Nov. 3,” said Hugh Gimber, global market strategist at the U.S. bank’s fund arm. “Binary events call for balance in portfolios.”

That need may have increased after the U.S.’s top spy chief accused Iran of making its most direct efforts to interfere in the election. So far, bets on stock volatility as measured by the VIX Index haven’t picked up much, while the MOVE Index signals bond swings are below this year’s average.

Chris Chapman, a portfolio manager at Manulife Investment, is another who believes the risk of a delayed outcome is underpriced in the market. He has now reduced his underweight position on 30-year Treasuries to reflect that view.