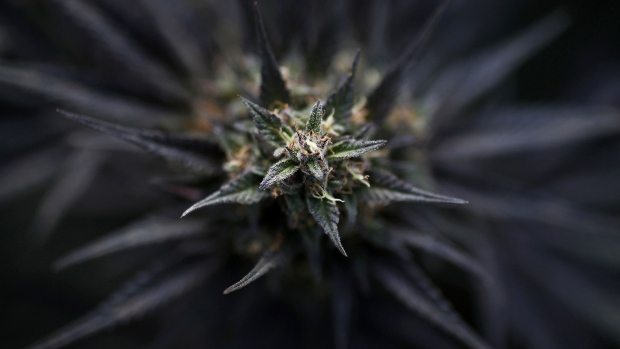 The bud of a cannabis plant , Photographer: Stefan Wermuth/Bloomberg

Pot stocks sank again Friday after three sessions of strong gains prompted one industry watcher to speculate that a “floor” had been reached. Friday’s selling was indiscriminate, with only 14 stocks in the 100-member BI Global Cannabis Competitive Peers index closing higher.

Most stocks still ended the week well above where they started -- the Bloomberg index tumbled 4.1% Friday yet was up 2.6% on the week -- but the volatility is a reminder that it will be a bumpy ride up even if we have hit bottom.

It’s also unlikely that all cannabis companies will benefit equally from a rally, according to Neil Selfe, founder and CEO of Toronto-based investment bank Infor Financial Group Inc. Selfe believes we could see a 20% bounce off the lows, but only for large, well-capitalized players like Canopy Growth Corp. and Cronos Group Inc.

“There are still many, many smaller companies that need capital and the capital markets are not open right now,” Selfe said. “I think you’re going to see a bigger bounceback in names like Cronos and Canopy than you’re going to see in some of the mid-tier names like Aphria or Aurora, and they in turn are going to outperform the really small guys.”

As long as the capital markets remain closed, some bankruptcies are inevitable, said Cowen & Co. analyst Vivien Azer. She doesn’t see that as a bad thing, however.

“I think over time having a shakeout and seeing some companies go bankrupt is going to be very helpful to the industry,” Azer said. “In the near term that’s probably another leg down but ultimately that’s what gets us to the positive catalyst. We need to see the marketplace get cleaned up.”

One other headwind that needs to be overcome before stocks can really start moving higher is year-end tax-loss selling, said Jon Najarian, strategic adviser to Innovation Shares LLC’s Cannabis ETF.

Najarian expects the sell-off to continue into mid-December followed by a rebound toward the end of the year.

Feeling overwhelmed by the shopping choices on Black Friday and Cyber Monday? Well, now there’s another day of deals to watch: Green Wednesday.

According to data from cannabis analytics firm Headset Inc., there’s a surge in cannabis sales the day before U.S. Thanksgiving. Across California, Colorado, Nevada and Washington, sales jumped 63% on last year’s Green Wednesday compared to the average of the previous four Wednesdays. Discounts were also higher that day, with an average markdown of 9.8%.

The day before Thanksgiving was the second-highest revenue day in November for dispensaries last year after Black Friday, according to BDS Analytics, which tracks sales in Arizona, Colorado, Oregon, California and Nevada.

“Consumers sought relaxation and minimal interaction before the large gathering day,” with 88% consuming alone or with one other person, according to a report from BDS.

And, in case you want to continue that relaxation during Thanksgiving dinner, Kiva Confections has developed a limited-edition THC-infused turkey gravy that takes effect in under 15 minutes “so you can sit back, relax, and let the holiday cheer wash over you.”

To contact the editors responsible for this story: Brad Olesen at bolesen3@bloomberg.net, Will Daley