As vaccination campaigns gather pace around the world, more travel markets are returning to levels last seen before the global COVID-19 outbreak, boding well for the summer tourism flows that are vital to repairing the pandemic-ravaged aviation industry.

In the past week, aircraft seat capacity in Russia and neighboring Ukraine jumped back above pre-pandemic levels, while markets including Iran, Costa Rica and Mexico edged closer to making up the shortfall of the last 18 months. Vietnam’s seat capacity surged 50 per cent over the prior week, though the usually popular tourist destination remains below pre-pandemic levels and closed to international travelers, according to Bloomberg’s weekly flight tracker, which uses OAG data to monitor the pulse of the industry’s comeback.

Globally, aviation capacity improved by almost 1 percentage point and now stands at 62 per cent of 2019 levels, the data show. The positive signs are starting to feed through to airlines even beyond the U.S., where pilot shortages have suddenly appeared. Qatar Airways said this week that it has seen an uptick in bookings, while Emirates, Air France-KLM and Wizz Air Holdings Plc plan to ramp up capacity over the summer to meet pent-up travel demand to sunny destinations. 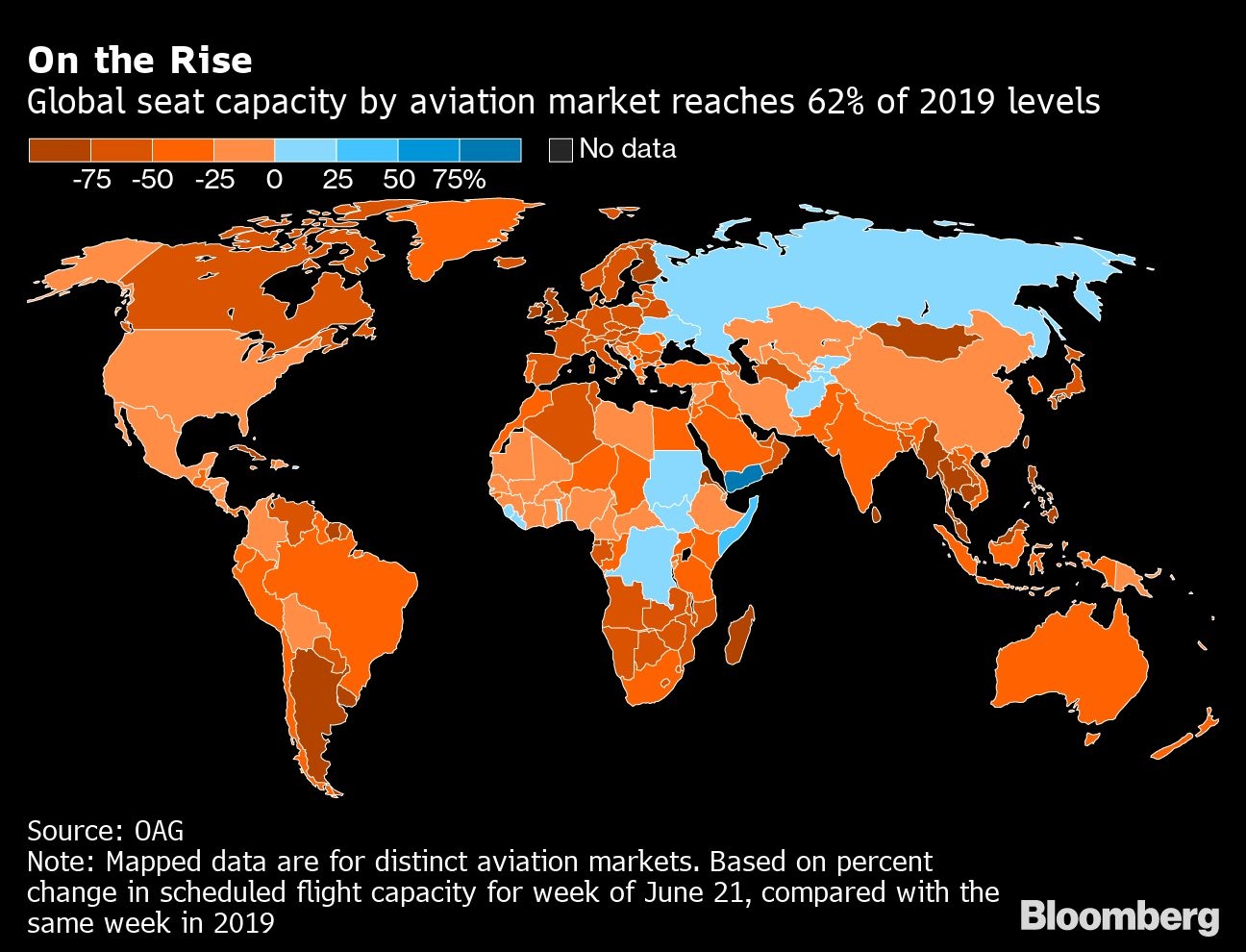 Europe and North America continue to lead the global recovery, particularly after the European Union admitted the U.S. to a so-called white list that doesn’t require lengthy quarantines. Conversely, a spate of local outbreaks and subsequent lockdowns have weighed on China, where capacity has fallen back below 2019 levels, dragging on the recovery of the wider Asian aviation market.

Willie Walsh, who heads the International Air Transport Association, said, he’s “slightly more optimistic” about a recovery than he was earlier this year, when the group predicted an industrywide loss of US$48 billion for 2021, a number he said was “a little bit conservative.’’

“We should do better than that,’’ Walsh said of IATA’s prediction during a wide-ranging interview on Thursday. “And I think Europe is probably going to open up a bit faster than we had expected.” 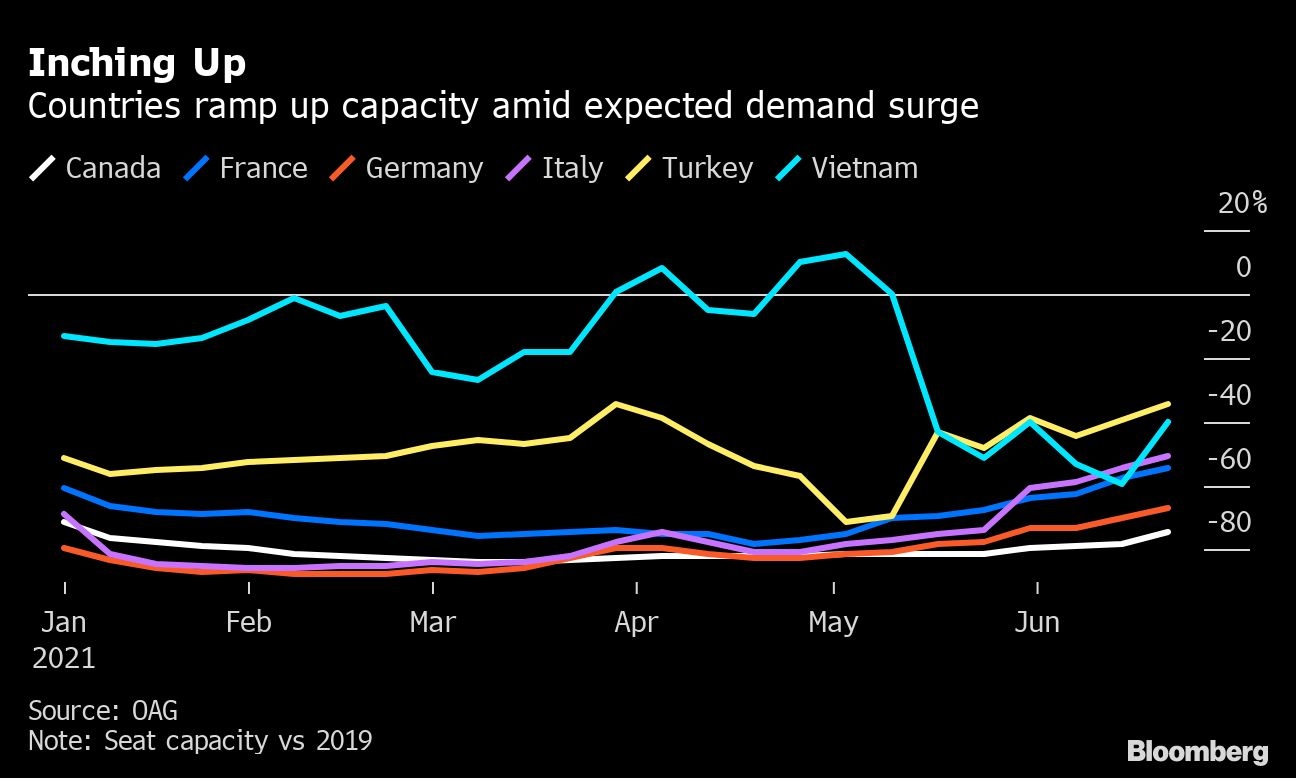 The U.K. government added some favorite tourism spots to its so-called green list of countries that don't require quarantine, including Malta, Madeira, Spain’s Balearic Islands and Caribbean islands such as Bermuda. Other countries, like Tunisia and Haiti, were downgraded, Transport Secretary Grant Shapps announced on Twitter. The changes come into effect on June 30.

But the prospects for Britons to take trips in Europe are still uncertain. German Chancellor Angela Merkel has suggested the whole European Union should be more cautious about allowing entry to travelers from countries outside the bloc with high rates of the delta variant of the virus -- which would include the U.K.

Scheduled capacity for European markets continue to climb as countries open up and airlines cater to pent-up demand. The number of seats on offer in Italy, France and Germany increased at least 9 per cent for each market. Europe enjoyed its best weekly improvement since August 2020, recovering to 48 per cent of 2019 levels, an increase of more than 2 percentage points from the prior week.

“We are progressing slowly and steadily,” said Rita Marques, Portugal’s secretary of state for tourism. “The trend is positive.”  Portugal has added 4 per cent this week and recovered more than 50 per cent of pre-COVID capacity, even though many long-haul flights are still not allowed in the country. 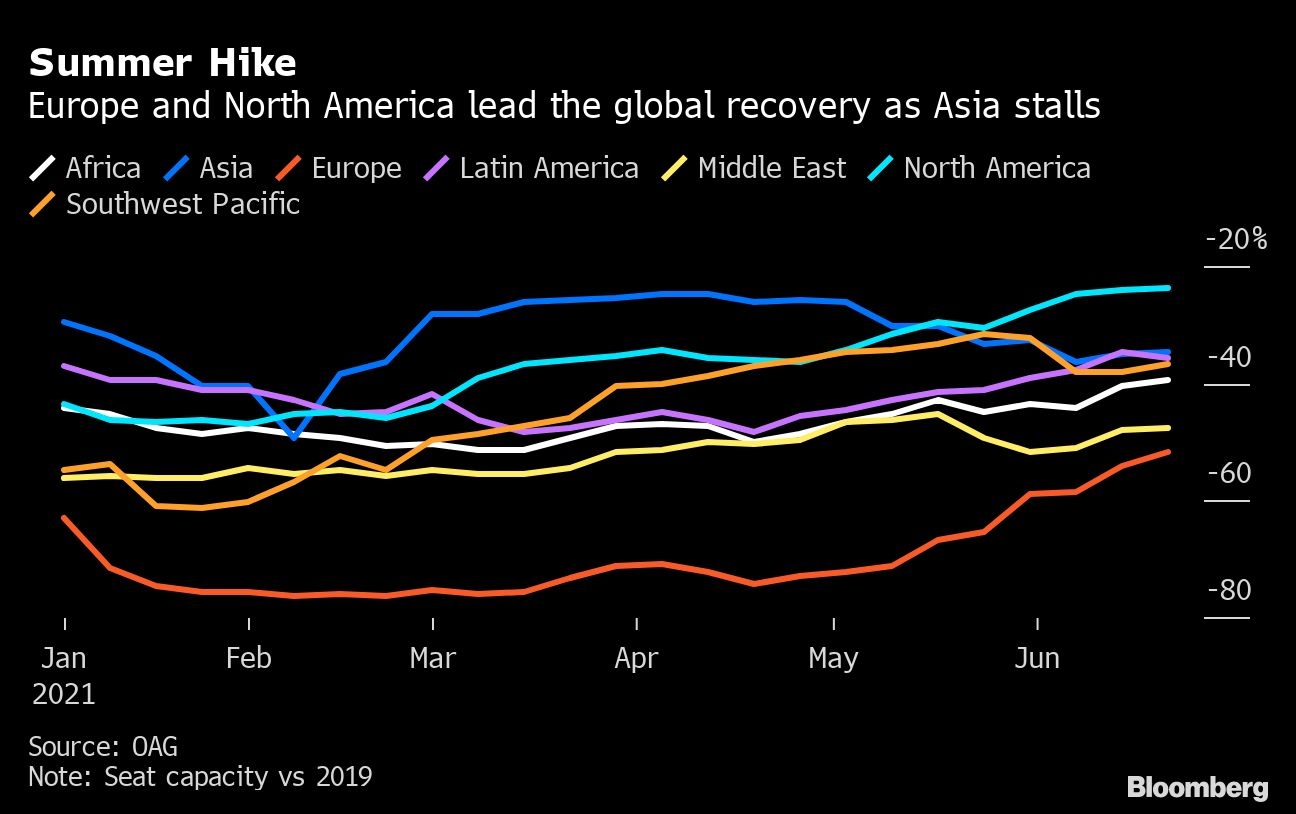 The U.S. recovered to more than 80 per cent of pre-COVID levels. More relief may be on its way for the region as the U.K. prepares to allow Britons who have been fully vaccinated to travel to more than 150 medium-risk countries by August, without the need to quarantine on their return.

“If those bilateral requirements can be reached then it is a significant step forward and demand will be released back into the systems,’’ he said.

Starting from July 5, Canada too will loosen travel restrictions for fully vaccinated citizens and residents. The government said gradual border reopening is a matter of weeks rather than months. In other markets, Emirates is ramping up capacity to 90 per cent of pre-COVID levels over the summer and the Middle East is preparing for heightened travel activity ahead of the eid holiday. 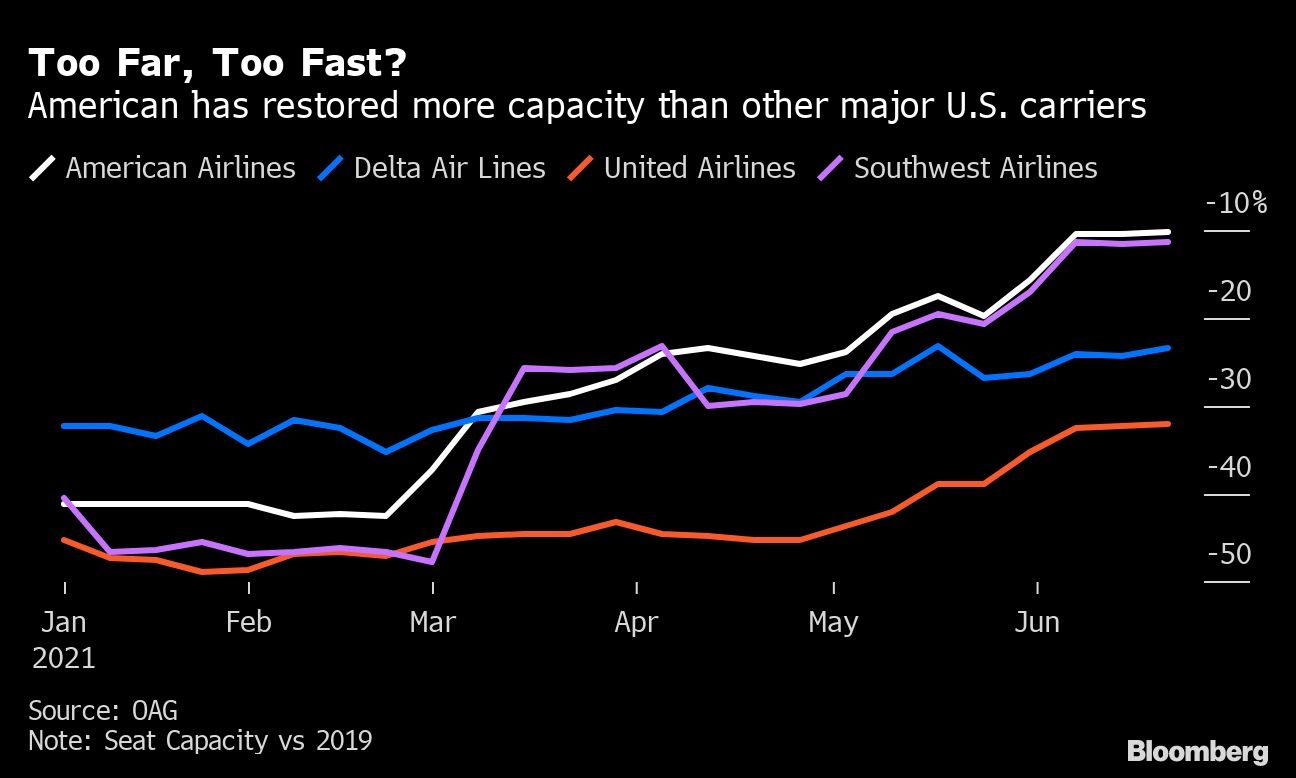 As the recovery gains pace, one complicating factor may turn out to be a shortage in workforce for the tourism, travel and hospitality industries. The problem is “particularly acute” in the U.S., Tony Capuan, chief executive officer of hotel chain Marriott International Inc., said. Some travel specialists are responding. Dubai Airports plans to add 3,500 positions to meet growing demand, CEO Paul Griffiths said.

Still, if the pandemic has taught the public one thing, it’s that every bit of progress comes with the risk of relapse. It’s a sentiment echoed by U.K. Prime Minister Boris Johnson, whose country has yet to shake off the final remains of its current lockdown measures. While there’s a “real opportunity” to open travel again with the help of double vaccinations, things will take time to get back to normal, he said on Thursday.

“I am not going to claim that this summer for travel purposes is going to be like any other summer,’’ Johnson said in response to questions in Parliament. “I don’t want to cast a pall over things. But as I said the other day, it will be different.”