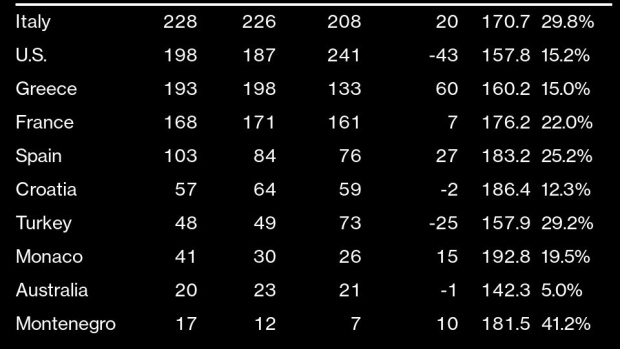 (Bloomberg) -- The world’s rich are sailing the Mediterranean, enjoying a holiday haven on the sea to escape the crowds and the threat of Covid-19.

Eager to jump-start the lagging tourist economy and compete with Greece and Spain, Italy tops the mega-yacht leaderboard for a second consecutive month in August. There have been 228 super yachts pinging off Italy over the last five days, a 20-vessel jump from this time last year, according to tracking data compiled by Bloomberg.

Following behind are the U.S., which dropped 43 yachts from last year, and Greece, which saw a gain of 60 vessels. Monetenegro, a surprise entrant to the leaderboard, came in 10th with 17 yachts. The Adriatic nation hopes to build its yacht presence as the wealthy look for alternatives in the area to favorites like Croatia.

Europe dominated the latest Bloomberg Resilience Ranking for best places to be during the pandemic, with a middle-ground strategy of widespread immunization and reopening based on vaccination status.

Celebrities like Kendall Jenner, Paris Hilton, Dwyane Wade and Gabrielle Union were seen basking in the sun aboard yachts anchored off the coast of Italy.