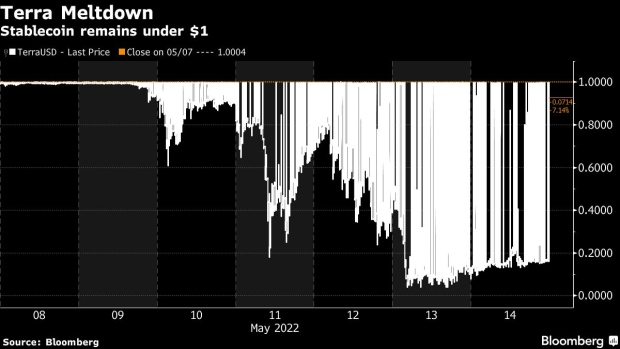 A novelty Bitcoin arranged in Sydney, Australia, on Friday, March 4, 2022. Bitcoin and other cryptocurrencies rose earlier in the week on the expectation that they might gain traction during Russia’s invasion of Ukraine. The advance was then stymied by concern about the effect of international sanctions against Russia. , Bloomberg

(Bloomberg) -- The $3.5 billion in Bitcoin purchased as a reserve by the foundation set up by the creators of the failed Terra blockchain became untraceable after it was moved to two cryptocurrency platforms, according to blockchain forensics firm Elliptic.

What happened to the cryptocurrency held in reserve may become a key question if investors seek to recoup losses suffered in the wake of the collapse of the blockchain.

Between January and March, the Luna Foundation Guard, or LFG, bought $3.5 billion of Bitcoin, Elliptic said, according to its blockchain analytics tracking tools.

When the value of Terraform Lab’s TerraUSD, or UST, stablecoin began to fall on May 9, the foundation said it would use Bitcoin from the reserve to purchase UST in order to maintain its one-to-one peg with the dollar. Over the next day, the crypto wallets used to hold the reserves were emptied, Elliptic said.

About $1.7 billion was sent on May 9 from LFG wallets to a new address through two transactions after Terra co-founder Do Kwon said the funds would be used to support the peg. Within hours, the entire amount was moved to a single account on the Gemini crypto exchange through several transactions and it was not possible to trace the assets from that point, Elliptic wrote.

The remain Bitcoin reserves were moved on May 10 in a single transaction to an account on the Binance exchange, Elliptic said. The blockchain analytics firm isn’t able to identify whether the assets were sold or moved to other wallets at that point.