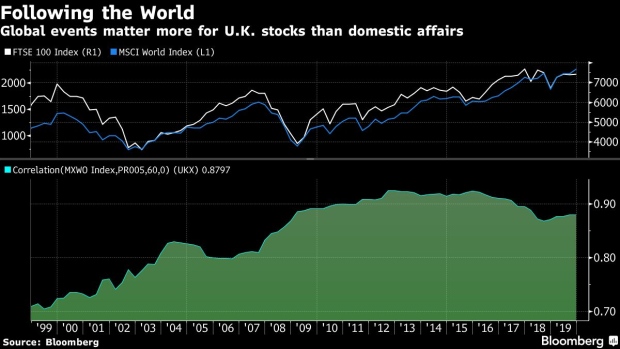 The winner of next month’s U.K. election is increasingly hard to predict. Equities watchers may take some comfort in knowing that historically, it hasn’t really made much difference who was in power.

The old adage suggests that the Conservative Party is pro-business and better for markets than the left-of-center and, in this election, socialist-leaning Labour Party. Yet taking real returns, adjusted for inflation, for U.K. equities from 1900 to the present day, Kleinwort Hambros found little difference between the two major parties.

Conservative governments have held office for a total of 67 years during that period, delivering a 7.6% real return, according to a recent report from the private bank. Labour has had 37 years in power and returned 7.7%. The remaining years had the Liberal Party in office in the early part of the 20th century, and investors would have lost 0.7% in real terms under their tenure.

Ultimately, “the basic inference is that it really doesn’t matter,” who is in Downing Street, said Fahad Kamal, chief market strategist at Kleinwort Hambros.

Clearly, there are caveats. This period includes two world wars, market crashes and global geopolitical troubles from the Cuban missile crisis to 9/11. And the correlation between the benchmark FTSE 100 and the S&P 500 as well as the MSCI World has been increasing over the years and is now close to the perfect value of 1, signaling that U.K. equities are much more sensitive to global and U.S. market movements than internal political affairs such as Brexit.

As Britain prepares to head for the polls, early data gives the Conservatives a clear lead. But because it’s effectively a second referendum on Brexit, foretelling the impact on equity markets could turn into a fool’s game as sentiment shifts during the campaign.

To contact the editors responsible for this story: Beth Mellor at bmellor@bloomberg.net, Jon Menon, Namitha Jagadeesh