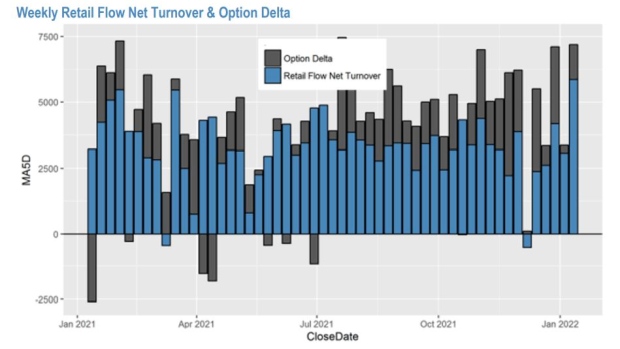 (Bloomberg) -- Is it lion-like courage, or sheep to the slaughter? That’s the question for retail dip-buyers who keep hurling fresh cash at increasingly turbulent Nasdaq stocks.

Investors emboldened by a strategy that worked all of last year plowed more than $1 billion into tech in recent days, with nearly every other sector also getting deposits. JPMorgan Chase & Co. said it saw the strongest retail flows on record, with at-home traders adding $5.9 billion to equities in the week through Tuesday.

But now that gumption is being tested as the earnings season kicks off and investors get set for a Federal Reserve tightening cycle that has the market on edge. The CBOE NDX Volatility Index held above 25 for a second straight week, something it’s done only 12% of the time in the last nine months. At Friday’s close, the Nasdaq Composite Index sat 7% below its all-time high hit in November.

Expensive tech shares housed in the Nasdaq have lost some of their shine ever since the Fed signaled it would move quickly to combat the fastest rate of inflation in four decades. The market now anticipates the central bank will hike rates four times in 2022, with the first coming in March. Just last week investors were penciling in only three hikes for the year.

It doesn’t help that tech is also is also losing its edge when it comes to earnings. Income growth for megacap tech companies is forecast to fall below the broader market’s rate into the end of the year, which could hurt their appeal.

The Nasdaq Composite Index lost 0.3% in the five days through Friday, its third straight weekly decline. Meanwhile, the S&P 500 closed unchanged as prints for retail sales, consumer sentiment and factory output all disappointed. Losses for the week added up to 0.3%, and the index hasn’t yet been able to notch a weekly gain this year.

“Chances are that we’ll start to get potentially bigger swings because we do have some support coming out of the market with the Fed shift,” said Barry Gilbert, asset allocation strategist at LPL Financial. “Some of the buying points might be a little bit lower, might be a little bit more delayed.”

Investors will have their resolve tested should declines become more frequent. In the week through Thursday, they shoveled more than $1 billion into technology exchange-traded funds, data compiled by Bloomberg show. In fact, every industry sector except consumer discretionary and materials saw inflows in that four-day stretch.

Meanwhile, plucky dip-buyers added another $500 million to the ProShares UltraPro QQQ fund (ticker TQQQ) in the week through Wednesday. The fund uses options to deliver three times the performance of the Nasdaq 100.

JPMorgan’s data showed that the week through Tuesday saw the strongest retail “order imbalance” for equities on record, meaning that buy orders outnumbered sell ones. Investors added a total of $5.9 billion, with Tuesday’s $1.7 billion flow being the highest single-session inflow in history.

Yet now that the Fed is plotting a more hawkish path, strategies that worked during the pandemic might not work going forward, if history is any guide.

Throughout the period since the March 2020 pandemic lows, buying into the S&P 500 after it slid below its average price over the last 50 days has delivered 2.3% over the following week, on average. But that was a divergence from the previous nine decades, when short-term returns in that scenario were poor according to Bespoke Investment Group. Going by the action on Friday, the historical norm might be back: The benchmark dropped below that threshold and dip buyers weren’t enthusiastically jumping back in going into the three-day weekend.

“Last year, it was almost clockwork -- every time the market went down 5%, it stabilized,” Victoria Greene, founding partner and chief investment officer at G Squared Private Wealth, said by phone. “This year, you might actually see a correction and see it fall 5-to-10%, so any time there’s nasty pullbacks, I wouldn’t necessarily move all my capital.”

Richly valued stocks have posted some of the most dramatic falls recently. Cathie Wood’s ARK Innovation ETF (ARKK) is down 15% this year. Bitcoin, too, has lost its luster, trading 7% lower since the year started.

“I don’t see any brokerage shops saying, ‘Yeah, let’s go, let’s buy the stock. Let’s buy the Cathie Wood stock, let’s go, come on’ -- nobody’s doing that,” said Hennessy’s Ellison. “They all told you to buy them when they were 50% higher, because it’s the new thing. Now when they go down, everybody backs off.”

To be sure, correlations between the biggest tech stocks have trended lower, meaning that there might be reduced interest in the cohort as “one giant theme trade,” as well as lower risk of a group-wide meltdown should the outlook falter for any individual firm, according to Gina Martin Adams of Bloomberg Intelligence.

“What Goes Up” podcast: What’s Behind the Tech Wreck? Hint: It’s Not All About Rates

Anastasia Amoroso, chief investment officer at iCapital Network Inc., says that she likes to approach tech in a selective way, as there are certain picks -- including some stocks that have lost 30% or 40% in the latest downdraft -- that look opportunistic.

“If you were asking, let’s say a week ago, I probably would’ve said, ‘No, I wouldn’t buy in broadly to the Nasdaq,’” largely because it hadn’t reached over-sold levels, she said. “It’s a very good time to get nuanced within what should actually be on the shopping list.”