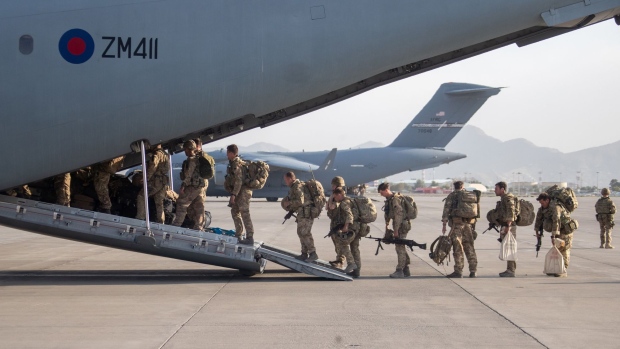 KABUL, AFGHANISTAN - AUGUST 28: In this handout image provided by the Ministry of Defence, UK military personnel board a A400M aircraft departing from Kabul on August 28, 2021 in Kabul, Afghanistan. As part of Operation Pitting, eligible Afghans are also being evacuated to the UK via the UAE under the Afghan Relocation and Assistance Program. Some will land and be processed at RAF Brize Norton. (Photo by Jonathan Gifford/MoD Crown Copyright via Getty Images) , Photographer: Handout/Getty Images Europe

(Bloomberg) -- A whistle-blower who worked on the U.K.’s response to the Afghanistan crisis has laid bare what the young diplomat says were serious shortcomings in how then-Foreign Secretary Dominic Raab -- and even the ministry itself -- handled the evacuation of vulnerable people from Kabul.

Raphael Marshall, a junior officer in the British foreign service, told a parliamentary committee that at times he was the only person processing emails sent to the government’s Afghan Special Cases inbox in August, when the U.S. left the war-torn country in chaos and the Taliban took over.

U.K. Officials Overwhelmed by Demands for Help From Afghanistan

The special cases team handled the files of Afghan journalists, aid workers and civil servants who were at risk because of their U.K. ties. As many as 150,000 people applied for evacuation but fewer than 5% received any assistance, according to Marshall. They were responding to a new program that sought to resettle as many as 20,000 Afghans at risk from the Islamic fundamentalists.

“These allegations are serious and go to the heart of the failures of leadership around the Afghan disaster,” said Tom Tugendhat, chair of the House of Commons Foreign Affairs Committee, which is probing the U.K.’s response.

In one of the most stinging accusations, Marshall said Raab took several hours to respond to case notes, only to then ask for them to be laid out “in a well-presented table to make decisions.”

“For the foreign secretary to make this request suggests he did not fully understand the situation,” Marshall said.

A government spokesperson said the U.K. regretted not being able to get as many people out of Afghanistan as it wanted. A person close to Raab said the major practical challenge at the time was verifying identity and securing safe passage to the airport, not the speed of decision-making.

Raab was eventually demoted from his job. As Western allies scramble to get out of Afghanistan, his decision not to return to London from his vacation on the Greek island of Crete in August caused public outcry. He defended his delayed return and insisted the fall of the capital came as surprise to all.

Marshall also said that for a week during the evacuation, emails were opened and marked with a flag but not entered into a spreadsheet. He added that in his opinion, “the purpose of this system was to allow the prime minister and the then foreign secretary to inform MPs that there were no unread emails.”