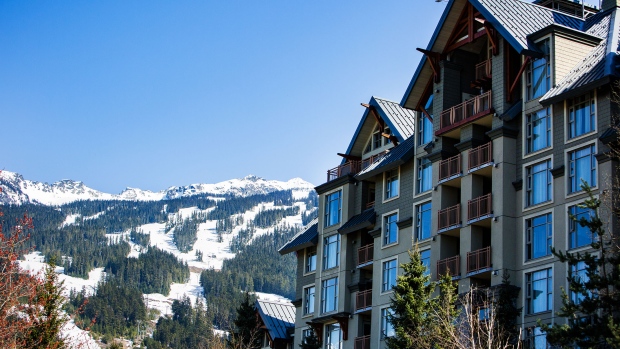 Benchmark property prices in Whistler, the ski town two hours north, have now surpassed those in the Pacific Coast city. Businesses are buying million-dollar properties to house employees as living costs drive out workers. The cost of visiting has also spiraled, with overnight rates during the winter peak topping anywhere else in the nation.

Phil Bonham, a 31-year-old ski patroller, has been living out of a 1984 Dodge camper van for four years, unable to afford the surging cost of housing.

Styrofoam cutouts are wedged into his windows to keep out the chill during cold snaps, when temperatures can plummet to minus 25 degrees Celsius (-15 Fahrenheit). He doesn’t bother with the propane-fired refrigerator in the tiny kitchen between the driver’s seat and bed -- nothing thaws anyway in winter, and he eats fruits and vegetables immediately before they freeze.

The small wood-burning stove in the back corner is the “hippie killer,” a reference to stoves like this that have been known to asphyxiate people in their sleep as they try to stay warm. The winter before last, he found himself lying under the van during a snow storm rebuilding pieces of the engine -- “a bit of a low point,” as he describes it. But that’s what a take-home wage of about $2,800 a month after taxes buys in Whistler.

“I only expected to do it for a season,” Bonham said in an interview in a parking lot near the ski slopes, where he identified at least seven other vehicles being used as full-time residences. “Without getting a second job or a girlfriend, there’s no way I could afford a room to myself. And I make a decent wage in comparison to many other jobs in Whistler.”

Vancouver has made global headlines in recent years, consistently ranking among the top 10 major cities worldwide most at risk of a housing bubble. Last year, Toronto took the top spot giving Canada the ignominious distinction of being the only country with two cities to make the cut in UBS Group AG’s annual list. Yet price price gains in Whistler have outpaced both cities.

“We think housing is the single most important issue we are facing as a community,” Marc Riddell, a spokesman for Whistler Blackcomb, owned by Vail Resorts Inc. and the area’s biggest employer, said in an email.

With a permanent population of fewer than 12,000 residents, there are more than 1,300 applicants on wait lists to either rent or buy homes at below-market rates in a residents-only pool managed by the Whistler Housing Authority. The agency aims to provide housing for at least 75 percent of the town’s employees -- a target that “will be very challenging to continue to meet,” according to a December assessment.

It’s the dark underbelly of Whistler’s soaring popularity. Its transition from a skiing mecca into a four-season destination for golfers, hikers and bikers means the pressure for accommodation from seasonal workers and tourists no longer eases when the snow melts. “We’re as busy now in the summer as in the winter,” said Mark Lamming, owner of Purebread, a bakery with two locations in Whistler.

Mayor Nancy Wilhelm-Morden has a task force dedicated solely to resident housing that’s sought to explain the massive run up. Young families have migrated in to fill year-round jobs, but there aren’t enough homes to accommodate them. Suites that once housed local tenants are being replaced by lavish, sparsely used vacation chalets. Online home-share websites have made it easier for owners to illegally rent properties intended for residents to higher-paying tourists.

Much of the supply-side woes are also self-imposed. Canada’s first resort municipality, Whistler was purpose-built in the 1980s in the image of a pedestrian-free Swiss alpine village, and restrictive zoning and land-use rules to prevent over-development also choke supply. Meanwhile, a byzantine web of rules dictate how residences can be used in the broader community.

In October, the benchmark price of a townhouse in Whistler surpassed $1 million for the first time. Vancouver is a steal in comparison -- only $835,000. A detached house in Whistler is now $1.67 million, 4 per cent costlier than in Vancouver.

The rental market is more mind-boggling. One recent listing sought two female tenants for a single room in a shared house: the price was $780 -- each -- to share a double bed. Many renters spend more than 50 percent of their income on housing. Mayor Wilhelm-Morden, incensed by landlords raking in cash from illegal short-term rentals, has imposed a $1,000-a-day fine for violators, saying Whistler won’t tolerate “employees shoved out the back door” to make way for tourists.

“People told us, ‘Your biggest issue will be accommodation -- if your staff can’t find accommodation, it doesn’t matter how much you pay them,’” recounts Kling, whose co-founder is his wife, Jelena. “So we took that risk off the table and purchased a home.”

The seven-bedroom residence cost “close to a couple million dollars” and will house the hotel’s general manager and a handful of key employees. The Klings even looked at buying a second staff property. “But so much of this stuff now -- forget about buying, I wouldn’t want to put my worst enemy there,” he said.

They’re not alone. Scandinave Spa, a 20,000-square-foot thermal bath facility, built five housing units on site when it opened in 2010, bought an additional staff property in nearby Cheakamus, and helps arrange rentals for employees. Vail houses 31 per cent of its workforce and is considering investing in developments for employee accommodation.

One in three businesses were unable to find enough staff last year, according to the housing authority. The town council has committed to adding 1,000 new resident beds by 2023 though one local developer says that’s less than half what’s needed. It’s loosening zoning rules to allow some neighborhoods to densify and releasing part of its land to build more affordable housing. It plans to require commercial and tourist developers to either construct affordable employee housing as part of their projects or pay cash-in-lieu.

For some it’s too late. Cathy Zeglinski, a family doctor, closed her Whistler practice last September, saying the young residents who once comprised the backbone of her clinic can no longer afford to live in Whistler.

“We’re earning Canadian dollars, but the people coming in aren’t tied to the local economy -- we can’t compete,” she said. “Whistler was once a very special place but with real estate prices stratospheric, there’s no place left for locals.”

--With assistance from Natalie Wong and Erik Hertzberg