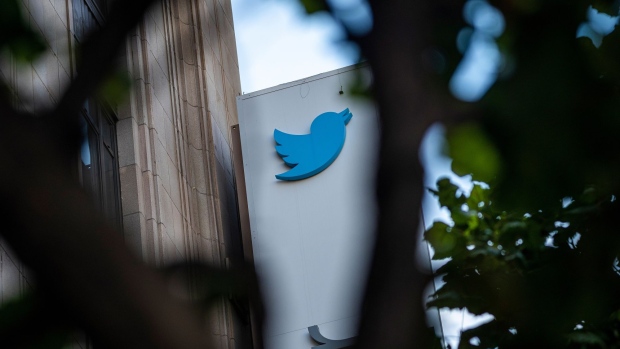 Twitter headquarters in San Francisco, California, US, on Thursday, Oct. 6, 2022. Stock markets are still not entirely sold on Elon Musk's $44 billion takeover of Twitter Inc. after the billionaire revived the deal at its original price earlier this week. , Bloomberg

(Bloomberg) -- The White House will continue to use Twitter Inc. to communicate with voters as long as it remains a “viable platform,” White House chief of staff Ron Klain said Monday.

“I think there’s no doubt that Twitter is a rougher neighborhood than it was a month ago,” Klain said at the Wall Street Journal’s CEO Summit.

The White House, however, has an obligation to “to try to communicate where we can, how we can, and reach as many people as we can,” Klain continued. “And Twitter remains a very powerful platform for doing that. It’s a good way to get our position and message out to lots of people who we wouldn’t reach otherwise.”

Klain’s remarks were the strongest indication yet that the White House would remain on Twitter despite policies implemented under new owner Elon Musk, who has rolled back content moderation policies and proposed charging users for verification checkmarks.

Musk on Friday also released emails about the blocking of news stories critical of the president’s son, Hunter Biden before the 2020 election -- a move the White House described as a “distraction” from the rise of hate speech on the platform.

“Look what is happening, frankly it’s not healthy, it won’t do anything to help a single American improve their lives,” White House Press Secretary Karine Jean-Pierre said Monday. “We see it as an interesting coincidence, and it’s a distraction.”

Musk touted the publication of what writer Matt Taibbi said were executives’ emails, in which they debated the controversial decision to restrict access in October 2020 to a New York Post article that contained allegations about Hunter Biden. The billionaire Twitter owner has accused the company’s previous leadership team of opposing free speech, while claiming he has championed it.

Jean-Pierre said the document trove was “full of old news” and pointed out that it was released at the same time the social network is “facing very real and very serious questions about the rising volume of anger, hate and antisemitism on their platform, and how they’re letting it happen.”

Researchers have found that slurs against Black Americans have appeared more than twice as often on Twitter under Musk’s stewardship as they did previously and antisemitic posts have increased more than 61%, according to a New York Times report.

The rapper Kanye West, who now goes by Ye, was suspended from Twitter last week after he posted an image of a swastika inside a Star of David. Musk said the tweet violated Twitter’s policy against inciting violence. Ye had been allowed back on the site after it restricted his account in October in response to another antisemitic tweet.

Twitter, which no longer has a communications team, didn’t respond to a request sent to a general press email.