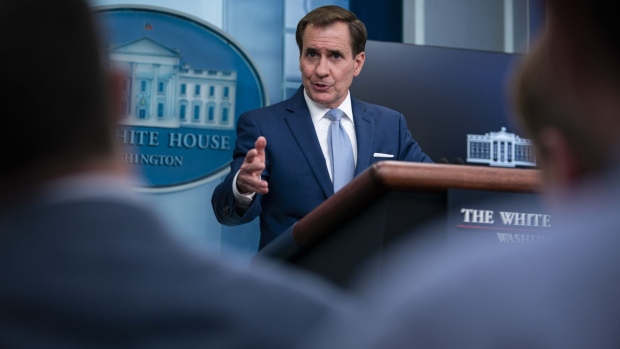 John Kirby, national security council coordinator, speaks during a news conference in the James S. Brady Press Briefing Room at the White House in Washington, D.C., US, on Tuesday, Aug. 2, 2022. US House Speaker Nancy Pelosi became the highest-ranking American politician to visit Taiwan in 25 years, prompting China to announce missile tests and military drills encircling the island that set the stage for some of its most provocative actions in decades. , Bloomberg

“We condemn these actions, which are irresponsible and at odds with our long-standing goal of maintaining peace and stability across the Taiwan Strait and in the region,” National Security Council spokesman John Kirby told reporters on Thursday.

Kirby said that the US anticipated China would continue to act in the coming days after launching 11 missiles landing to the northeast, east, and southeast of Taiwan. He said strikes that Japan said landed in its exclusive economic zone and in some cases passed over Taiwan served as an example of China “undermining peace and security in the region.”

While denouncing China’s missile tests, Kirby said the US was planning to postpone until the “near future” its own test of an intercontinental ballistic missile that was planned for later in the week.

“As China engages in destabilizing military exercises around Taiwan, the United States is demonstrating instead that behavior over responsible nuclear power by reducing the risks of miscalculation and misperception.”

At the same time, Kirby said the Pentagon is ordering the aircraft carrier USS Ronald Reagan and the other ships in its strike group to remain in the “general area” to monitor the situation around Taiwan. The US also plans to continue standard air and maritime transit through the Taiwan Strait in the coming weeks, he said.

Pelosi’s visit to Taiwan came despite China warning there would be repercussions for her visit to the island, including her meeting with Taiwanese President Tsai Ing-wen. Chinese President Xi Jinping has faced political pressure to respond strongly after his warnings were ignored.