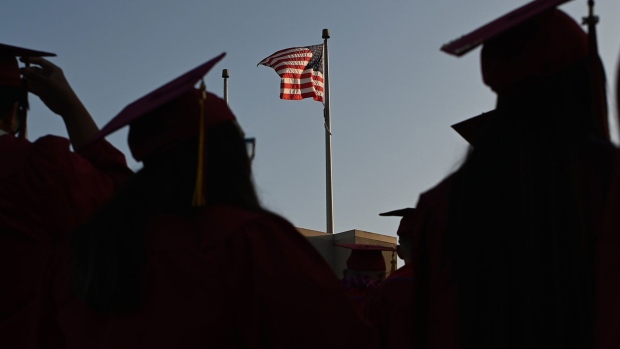 (Bloomberg) -- The Biden administration is considering extending its pause on student loan repayments, now set to resume Jan. 1, in response to legal challenges to its student-debt forgiveness program, according to people familiar with the internal discussions.

White House aides, Democratic lawmakers and advocates have been discussing ways to give borrowers a measure of financial relief, as the lawsuits work their way through the court system, people familiar with the talks said.

A federal appeals court on Monday blocked the administration from carrying out President Joe Biden’s plan to cancel as much as $20,000 in debt for some borrowers. The decision followed a ruling last week from a federal judge in Texas finding the plan unlawful. The Department of Education has stopped accepting applications for loan forgiveness, thrusting millions of Americans into financial limbo.

No final decision has been made yet on pausing student loan repayments, nor on the length of any new pause. Some administration lawyers are wary of offering another extension of a pandemic-era program, but Democratic lawmakers and aides would like to take action before the Dec. 6 Senate runoff election in Georgia, the people familiar said.

Democratic Senator Raphael Warnock of Georgia pushed the Biden administration to forgive student debt, and Democratic aides believe he would receive a political boost, especially with younger voters, from an extended pause on repayments. Warnock will face Republican challenger Herschel Walker in the runoff.

Debt relief delivered on a Biden campaign promise and was seen as a draw for young and progressive voters in the midterms.

A White House spokesperson did not immediately respond to a request for comment.

The freeze on student loan repayments, first adopted in March 2020 under President Donald Trump, was extended multiple times by Biden. When Biden in August unveiled his broad debt-forgiveness plan, he announced that loan repayments would resume in January 2023.

The Biden administration has vowed to keep fighting the legal challenges to the program, which Republicans say exceeded the White House’s authority.

“We are confident in our legal authority for the student debt relief program and believe it is necessary to help borrowers most in need as they recover from the pandemic,” White House Press Secretary Karine Jean-Pierre said in a statement Monday. “The Administration will continue to fight these baseless lawsuits by Republican officials and special interests and will never stop fighting to support working and middle class Americans.”

“With inflation at a 40-year high and unemployment near historic lows, there is absolutely no justification for extending the student debt pause yet again. The pause was put in place as an emergency measure early in the pandemic. As the President has repeatedly pointed out, the pandemic recession is long over,” said Maya MacGuineas, president of the Committee for a Responsible Federal Budget.

“The student debt pause has already cost the federal government over $150 billion and contributed to inflation. Extending the pause through the end of 2024 would cost over $120 billion more, bringing the total cost to nearly $300 billion,” she added.

The Congressional Budget Office has said loan forgiveness would cost roughly $400 billion over the next three decades.

The Washington Post first reported that the White House was weighing another extension of the pause on loan repayments.

The Biden administration announced in August its plans to cancel $10,000 in student debt for anyone making less than $125,000 or households with incomes of less than $250,000. Pell Grant recipients could receive $20,000 in total debt forgiveness.