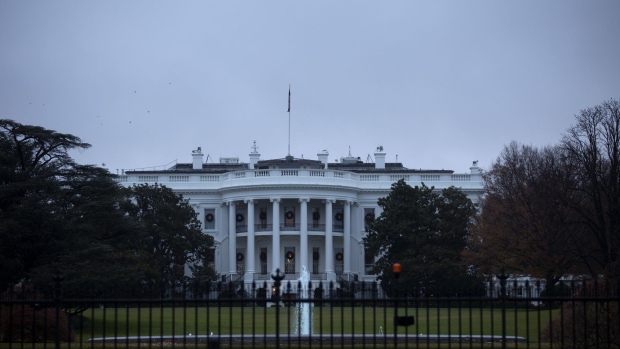 The White House stands beyond a fence at dusk in Washington D.C. , Bloomberg

(Bloomberg) -- The House Intelligence Committee plans Tuesday to consider its report on the impeachment inquiry into President Donald Trump, a day before the House Judiciary Committee holds its first hearing on constitutional issues.

Here are the latest developments:

White House Counsel Pat Cipollone plans to join Senate Republicans during their lunch meeting on Wednesday, the same day the House Judiciary Committee will hold its first hearing on the impeachment inquiry.

Cipollone has been playing a leading role in reaching out to senators in recent weeks, including a meeting late last month at the White House with Senate GOP allies of Trump to discuss how long an impeachment trial might last. Those attending included Senators John Kennedy of Louisiana, Tom Cotton of Arkansas and Ted Cruz of Texas.

Catch Up on Impeachment Coverage

To contact the reporter on this story: Laura Litvan in Washington at llitvan@bloomberg.net

To contact the editors responsible for this story: Joe Sobczyk at jsobczyk@bloomberg.net, Laurie Asséo