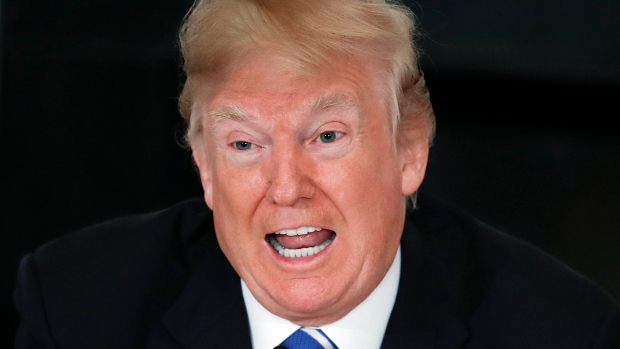 U.S. President Donald Trump speaks in the State Dining Room of the White House in Washington, Monday, Feb. 12, 2018, during a meeting with state and local officials about infrastructure. , (AP Photo/Carolyn Kaster)

WASHINGTON -- Canada will get at least some temporary relief allowing it to avoid the immediate impact of U.S. President Donald Trump's controversial steel and aluminum tariffs, the White House suggested Wednesday.

After days of drama and a last-minute diplomatic scramble, the White House is now hinting that the impending tariff announcement might have some form of national-security exception for the U.S.'s neighbours.

"There are potential carve-outs for Canada and Mexico based on national security -- and possibly other countries as well, based on that process," spokeswoman Sarah Sanders said during her daily media briefing.

"That would be a case-by-case and country-by-country basis."

But the drama isn't over.

There are some indications from the White House that the tariff threat might continue to be held over Canada and Mexico as a negotiating weapon, in an effort to prod them into a new NAFTA deal.

Looking forward to 3:30 P.M. meeting today at the White House. We have to protect & build our Steel and Aluminum Industries while at the same time showing great flexibility and cooperation toward those that are real friends and treat us fairly on both trade and the military.

Hawkish White House trade adviser Peter Navarro suggested any exemption would come with a catch. He told Fox Business Channel that, Thursday at 3:30 p.m. ET, surrounded by steel workers in the Oval Office, Trump would sign proclamations that impose tariffs that kick in within 15 to 30 days on most countries.

He suggested tariffs could still hit Canada and Mexico later: "The proclamation will have a clause that does not impose these tariffs immediately on Canada and Mexico. It's gonna give us ... the opportunity to negotiate a great (NAFTA) deal for this country. And if we get that, all's good with Canada and Mexico."

That was followed by a Washington Post report late Wednesday that said one version of the still-unfinalized plan would see Canada and Mexico granted a 30-day exemption -- to be renewed based on progress at the NAFTA bargaining table.

But the details are being hotly debated within the White House.

Both the substance and the timing of the announcement are in dispute: an initial version of the White House schedule for Thursday shows no tariff announcement like the one Navarro described.

Some want a hardline approach where the tariffs apply to every country; some want the opposite, meaning full relief for Canada and other allies. Then there's the third, middle-of-the-road approach others have suggested, and which Navarro appeared to hint at: offering short-term relief for Canada and Mexico, while continuing to use the tariff threat as NAFTA leverage.

The internal pressure from within Washington to go back to the drawing board was illustrated Wednesday in a letter from 107 congressional Republicans, who expressed deep concern about the president's plans.

The Canadian government isn't celebrating yet. It kept a low profile following the White House statement about a carve-out. Speaking earlier in the day, Prime Minister Justin Trudeau said he wants to withhold judgment until the final details are out.

"We know from experience that we need to wait and see what this president is actually going to do," Trudeau said during a news conference just before the Sanders briefing.

"There's many discussions on this going on in the United States right now. We are going to make sure we're doing everything we need to do to protect Canadian workers -- and that means waiting to see what the president actually does."

Behind the scenes, a full-court, 11th-hour diplomatic press was underway Wednesday.

It occurred in Ottawa, Washington, New York and even in Texas, where a number of Canadian officials were reaching out to their American peers -- some of whom had already been pleading the Canadian case.

The fact that Canada might be hit with tariffs had actually become a leading talking point for critics bashing the Trump plan. From Capitol Hill, to cable TV, to the Wall Street Journal editorial pages, numerous commentators ridiculed the idea of a supposed national-security tariff applied to Canada.

A poll this week suggested the measures are unpopular.

Trudeau, meanwhile, spoke with the president this week.

A source familiar with the last-minute scramble likened it to a high-stakes, reality-show contest, with a drama-courting U.S. president at the centre of the production: "(It's a) last-episode-of-'The-Apprentice' kind of thing."

Canada is the No. 1 exporter of steel and aluminum into the U.S., which is looking to impose tariffs under a rarely used national-security provision in a 1962 law, which some critics have called either illegitimate or likely to spark copycat measures that threaten the international trading system.

The biggest American business lobby is among those fighting the plan.

"Alienating our strongest global allies amid high-stakes trade negotiations is not the path to long-term American leadership."