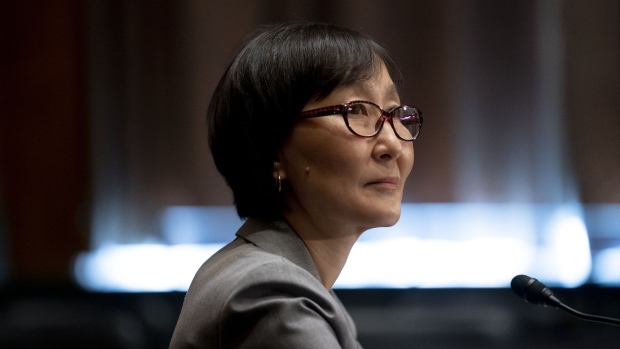 (Bloomberg) -- The Biden administration on Wednesday night fiercely defended the nomination of Saule Omarova as a top banking regulator after it was reported that five Democratic senators told the White House they wouldn’t support her.

A White House official said the attacks on Omarova, a Cornell law professor who has been sharply critical of big banks and cryptocurrencies, were so unfair that they smacked of the red-baiting smears leveled by Senator Joe McCarthy in the 1950s.

The official, who was granted anonymity to discuss the matter, added the adamant opposition from banks and Republican lawmakers was generated by fear of scrutiny, not evidence that Omarova was unqualified to run the Office of the Comptroller of the Currency.

The official, however, did not address an article by Axios earlier Wednesday that five Democratic senators had said they would not vote for her. The offices of two of the senators, Jon Tester of Montana and John Warner of Virginia declined to comment on the article. The other senators mentioned in the article were Kyrsten Sinema, and Mark Kelly of Arizona and John Hickenlooper of Colorado.

In the evenly divided Senate, their votes are essential to Omarova’s confirmation.

The OCC, a branch of the U.S. Treasury, polices banks chartered by National Bank Act and other financial institutions.

Republicans have made an issue of Omarova, a Kazakhstan native, having grown up in Soviet times, as well as her academic papers advocating a fundamental overhaul of the financial system and her remarks about letting smaller energy companies go bankrupt as the economy turns to a greener future.

According to her biography on the Cornell Law School website, Omarova received an undergraduate degree at Moscow State University before getting a Ph.D. at the University of Wisconsin and a law degree at Northwestern.

Before joining the Cornell faculty, she worked at the Treasury during the George W. Bush administration and at Davis Polk, & Wardwell in New York.

In October, Senator Pat Toomey of Pennsylvania, the top Republican on the Banking Committee, pointed out that her college scholarship was named for Lenin. He took to the floor to demand a copy “in the original Russian” of a paper that focused on Marxism.

Earlier this week, he told Bloomberg Television she was unacceptable because of her previous support for policies that he labeled “socialist.”

Omarova has described herself as a “free-market idealist.”

“I know that Soviet-style communism doesn’t work,” she said. “I’ve lived through it. That system was deeply flawed. It’s dead.”